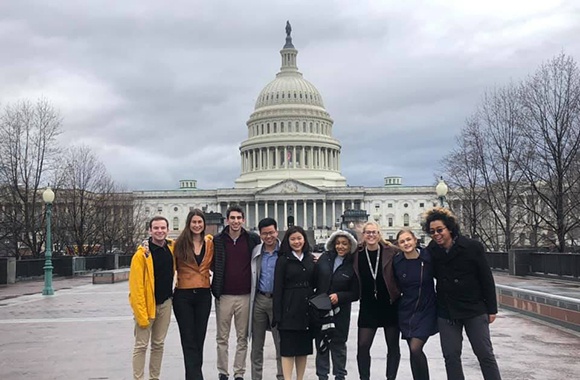 The Swearer Center at Brown University, in collaboration with the Watson Institute for International and Public Affairs, is pleased to announce the newest participants of the Brown in Washington fellowship program for the Spring 2019 semester. These nine students represent a variety of backgrounds and majors, contributing to the missions of both the Swearer Center and the Watson Institute, while providing practical experience in the public policy sphere.

The Brown in Washington program offers students a semester living and interning in Washington, D.C. working with top public and nonprofit sector agencies, while completing a full course load with Brown University faculty. Additionally, meetings with distinguished scholars, alumni, and practitioners along with visits to government agencies and organizations, including the US Department of State, the UN Foundation, and the National Museum of African American History and Culture, are also part of their experience in D.C.

The Swearer Center is accepting applications for the Fall 2019 semester! For more information about the program and to apply, visit swearer.brown.edu/biw. The application deadline is April 3, 2019.

Will Gomberg is a junior political science concentrator, and a participant in the Swearer Center’s Engaged Scholars Program. This semester, he is interning in the Office of Congressman Mike Quigley (D-IL). His previous work experiences include internships at the Chicago Coalition for the Homeless, the Anti-Defamation League, and Allow Good, a Chicago-area nonprofit promoting philanthropy education. On campus, Will is on the leadership team of HOPE, Brown’s largest student-run service and advocacy organization, which seeks to end homelessness in Rhode Island. Additionally, he conducts research in the Political Science department, pursuing varied interests such as affordable housing, urban economic inequality, and philanthropy. Hailing from the North Side of Chicago, Will is an avid Cubs fan and deep dish pizza evangelist.

Deenaalee Hodgdon is Deg Hit’an Athabaskan and Unangax from Alaska, with ancestral ties to Bristol Bay and the lower Yukon River region. Whether during her work as a cultural interpreter, or raft guide in Denali National Park, as a commercial fisherwoman or during the course of her own adventures traveling throughout Canada and the United States, she has been acutely aware of access issues affecting Indigenous people. Her intellectual pursuits, and curiosities, are primarily dedicated to these issues. As an anthropology and public policy double concentrator, she seeks to view policy-making through a holistic and Indigenous lens. Her current research is focused on equity issues within the Bristol Bay fishery permitting system. She is an activist academic, having participated as a water protector at Standing Rock, among other movements. As a native woman rock climber, skier, and backcountry hiker, she hopes to increase visibility and inclusivity in the outdoors for Indigenous youth, and people of color. Deenaalee seeks to develop the skill-set needed to give voice to, and to incite meaningful change throughout Indian Country. She will be interning at The Polar Institute at the Wilson Center this semester.

Jenna Knueppel is a tribal member of the Sokaogon Chippewa Community of Mole Lake as well as a descendant of the Bad River Community of Lake Superior Chippewa. She is a third year double concentrating in public policy and behavioral decision sciences, influenced by her identities as a first-generation, low-income, and urban Indigenous woman from Milwaukee, Wisconsin. At Brown, she is the co-coordinator of Natives at Brown and the digital media manager of the Undocumented, First-Generation, Low-Income Student Center. Jenna was also the president of Brown’s QuestBridge chapter and an education and economic research assistant in Providence Public Schools. Her past summer was spent in Tulsa, Oklahoma at the 1921 Tulsa Race Massacre Centennial Commission engaging in community conversations about the educational, cultural, and economic development of the Greenwood District. Her dedication to learn about and influence the conditions and systems that affect her communities and other underrepresented peoples makes her excited to engage in community-relevant policy work in Washington D.C., where she will be interning in the Office of Senator Tammy Baldwin (D-WI). Jenna enjoys all things coffee, music, and urban arts related.

Sean Manning is a senior concentrating in political science with an interest in the intersection of grassroots organizing and mass media. Firmly committed to the causes and campaigns he works on, he took a semester off from Brown to work as an organizer for Hillary Clinton's presidential campaign in 2016. Inspired by the campaign organizers and volunteers that he encountered on this journey and ignited by the results of the election, he took another semester off to help support NextGen America’s record-shattering youth turnout effort in Wisconsin in 2018. Sean has interned in the Office of Governor Gina Raimondo, Congressman Tim Ryan, and Cuyahoga County Executive Armond Budish. This semester he will be an intern at ACRONYM. He is a proud native of Cleveland, Ohio.

Eboni McNeal is a junior double concentrating in public policy and Africana studies. She is passionate about many aspects of social change, but is particularly interested in criminal justice reform. Her commitment to positive change within the prison system manifests in her role as Petey Greene’s Director of Diversity and Recruitment, where she works to encourage student engagement in educational programs within Rhode Island prisons. She also works with WBRU 101.1 FM as the Music Director for 360, a show that connects the Providence community with their loved ones in prison. Although she resides in the Northeast, her heart is in the South, specifically in her hometown located right outside Atlanta, Georgia. In her free time, Eboni enjoys reading books and listening to podcasts. Eboni is interning at The Leadership Conference on Civil and Human Rights this semester.

Julia Rosenberg is a junior concentrating in public policy and English on the Nonfiction Writing track. She is passionate about criminal justice reform and has volunteered with the Petey Greene Program during her time at Brown, tutoring in a classroom at the Rhode Island Adult Correctional Institute. She is also passionate about women’s rights and spent a summer abroad reviewing reproductive rights legislation for a representative in Ireland’s parliament. At Brown, Julia unites her passions for social justice and nonfiction writing as a member of the Swearer Center’s Storyteller’s Fellowship, where she currently has two stories in the works about prison education and expressions of mental illness through art. She believes storytelling is a thorough, dignified, and interpersonal mechanism for creating social change, and hopes to someday become a speechwriter. Julia enjoys photography, running, and performing in Skorts, Brown’s only sketch comedy group comprised of people of marginalized genders. She will be an intern in the Office of Senator Kirsten Gillibrand (D-NY) this semester.

Ruiqi (Nancy) Xu is a junior double concentrating in international relations and economics. She is a passionate advocate for social inequality and economic development. This past summer, Nancy interned at the China Development Bank, where she evaluated and oversaw government-funded infrastructure programs on urban development. She was also a research assistant for the Rural Education Action Program at Stanford University, where she utilized her quantitative skills to help improve the quality of primary health care in rural China. On campus, Nancy is the co-president of the Economics Department Undergraduate Group, a student event ambassador at the Taubman Center for American Politics and Policy, and the finance chair for the StraitTalk symposium, a non-partisan dialogue workshop that empowers young people from both sides of the Taiwan Strait to collaborate in transforming the Taiwan Strait conflict. She is also a campus tour guide, a percussionist, and a ski enthusiast. Nancy will be an intern in the Office of Senator Sheldon Whitehouse (D-RI).

Yuan Tian (Michael), a junior concentrating in economics and international relations, is an intern at the American Enterprise Institute this semester. Born in China and raised in the United States, Michael is driven to improve understanding and foster relationships between the two countries. With an academic focus on East Asia, he hopes that his two areas of study will inform him on the political and economic issues pertaining to the region. This past summer, Michael worked in Washington, D.C. as a research assistant for the Walsh School of Foreign Service at Georgetown University. He focused on the origins of drug control policies in the 20th century, exploring both national and international legislation while highlighting the influence of the Opium Wars in China. On campus, Michael is currently the co-president of StraitTalk Brown, a non-partisan dialogue workshop that empowers young people from both sides of the Taiwan Strait to collaborate in transforming the Taiwan Strait conflict. He also serves as the finance chair for Brown Pre-Law Society, and a crisis manager for Brown Model UN. Michael works as an English tutor for Chinese students, and enjoys all things Star Wars.

Christopher Wong is a junior concentrating in political science and ethnic studies, with a focus on racial justice and queer liberation. He is specifically interested in anti-discrimination policy as it relates to the intersection of people of color and members of the LGBTQ+ community. Most recently, Chris interned at the Rhode Island Commission for Human Rights where he conducted investigations into alleged discrimination in the realms of housing, employment, and public accommodations. Chris has also engaged with federal legislation on these issues through his internships in the U.S. House of Representatives on Capitol Hill for Congressman Don Beyer and in the U.S. Senate for Senator Sheldon Whitehouse. On campus, Chris is a member of the Brown University Queer Alliance and chaired two IvyQ planning committees with the goal of bringing diverse speakers to campus for an annual Ivy League-wide conference on LGBTQ+ issues hosted at Brown in 2018. This semester, Chris will be interning in the Office of Congressman David Cicilline (D-RI).   In his spare time, Chris enjoys photography and filmmaking.