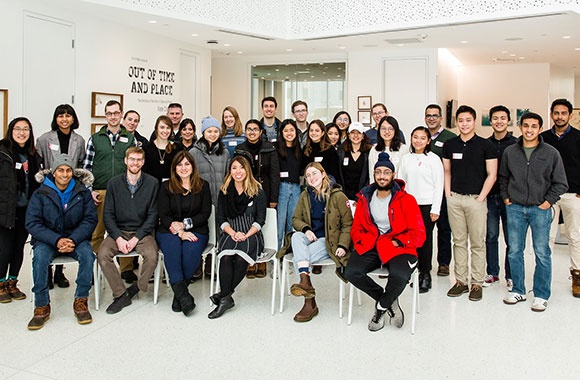 “A lot of times, we think of humanitarian emergencies as being international, so I think we’re trying to … bring people’s perspective back to our own backyards, where there are a lot of disasters happening that we need to be prepared for.”

While the term “hackathon” is usually associated with computer science and coding, the Watson Institute’s second annual Hack for Humanity brought students to Stephen Robert ’62 Hall on Saturday, March 2nd, with a different goal in mind: humanitarian responses to domestic emergencies. Hosted by the Humanitarian Innovation Initiative and the Brown Humanitarian Society, this year’s event examined humanitarian efforts through the lens of hurricane and natural disaster relief.

Rohan Dalvi ’21, a participant, noted that the structure encouraged innovative ideas. “Hackathons produce a creative environment, and I thought Hack for Humanity was a clever way to channel that creative energy into producing social benefit,” he said.

The event’s compact timeframe mirrors the response rate typically required after a natural disaster, Priya Shetty, president of the Brown Humanitarian Society e-board, explained. After a hurricane, “the way you gather resources and talk to people and develop solutions can often, unfortunately, be very immediate,” Shetty said.

The Brown Humanitarian Society was formed after last year, when participants realized that a student-driven body focused on these issues could continue to discuss humanitarian efforts even after Hack for Humanity.

“Our goal for having this year’s lens focus on domestic issues [was] really trying to reorient the way in which we view humanitarian crises,” Stulen said. “A lot of times, we think of humanitarian emergencies as being international, so I think we’re trying to … bring people’s perspective back to our own backyards, where there are a lot of disasters happening that we need to be prepared for,” he continued.

Participants heard from keynote speaker Ada Monzón, the first female meteorologist in Puerto Rico, about the challenges her country faced following Hurricane Maria. According to Monzón’s biography on the Hack for Humanity website, she “provided essential weather information during Hurricane Maria, helping the population prepare and remain calm throughout the most devastating disaster in Puerto Rico’s record.”

Monzón and a diverse group of other mentors conversed with students throughout the day, helping them think through the variables involved in disaster preparedness and relief. Stulen stressed the importance of the mentors in assisting student’s synthesis of the complexities of crises. Processing the emergency and possible solutions “both within your circle of colleagues and students but also [with] some of the practitioners that are actually working on these issues on the ground goes a long way,” he said.

Dalvi’s group worked on crowd control, focusing on the unreliable energy that Puerto Rico faced following Hurricane Maria. "Our idea was to use small donations from people across the world to install solar panels in rural clinics across Puerto Rico,” Dalvi said. “Using the savings generated by those solar panels, we’d pay donors back over time, and the clinics would benefit because ... they’d be able to continue normal operations during grid failure situations,” he explained.

Dalvi noted that the event revealed that “social problems are challenging ... because of the complexity of constraints.” He and his group found that, "only by narrowing down the question to power resilience in local clinics were we able to achieve a solution that we were confident in."

Vivian Yeung ’22 was a member of the second team, which explored resilience. Yeung noted that her group was inspired by Monzón’s discussion of the lack of medical treatment.  She and her group realized that a potential solution could be to “do something involving community networks.” The group decided to focus on medical care for people with physical disabilities.

First, the group realized the necessity of resilient communal bonds. “One of the important things about community networking is having a strong enough community,” Yeung said, emphasizing the necessity of involving community leaders in disaster preparation. In order to achieve this, the group discussed distributing information to leaders at gathering places, such as churches and schools, to raise awareness. The group hopes to pursue their project by applying for a seed grant and continuing discussion with Monzón through Skype calls, Yeung noted.

The event attracted students from a variety of concentrations and participants started the day with varying levels of experience in humanitarian work. “It was just really cool to see how people from different backgrounds came together,” Yeung said.

Shetty sees this multidisciplinary approach as critical to the success of the event. “I think that is something that is very important in humanitarian work,” Shetty said, emphasizing the potential for a more “layered approach” when individuals from a variety of academic backgrounds come together to work toward a singular goal. Stulen agreed, adding, “We need creative thinking. We need flexibility. So, any influx of new ideas of how to approach these complex issues is a positive.”