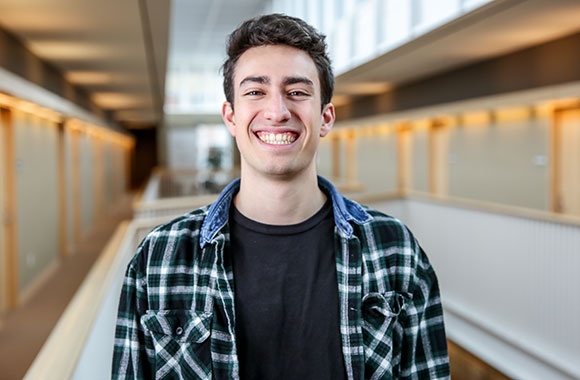 Last summer, you interned with the investigative team of the Mexican Commission for the Defense and Promotion of Human Rights, a U.N. affiliated human rights commission. Could you describe what you did during your internship?

The commission is a human rights watchdog that investigates crimes committed by non-state actors and the military. They investigate, publish, and bring cases to court — so they also have a team of lawyers. On top of that, they do a lot of advocacy work. My internship was with the investigative team. The project I worked on was cataloguing mass killing across the states, because there isn’t a lot of centralized information that organizations or people can access to learn about the situation in general. We tried to document different cases of mass killings and centralize the information into one database. I was also part of the displacement team, which works on tracking displaced people. I did research and helped with some policy briefs, looking at issues of displacement because of violence, cartels, or environmental issues.

What was was the most meaningful aspect of your experience with the commission?

The experience offered me a hands-on opportunity to learn about these topics. If you want to learn about the drug war, or violence in general in Latin America, there are only a couple of classes at Brown that address those topics. It was not something I’d studied the past, so I really learned through my work. These issues do not get much traction in the US and it was great to have access to the information and the activists doing this research. The commission relied mostly on networks of activists or other community based organizations, because you can’t just send someone into a cartel or an area of violence to ask for information, the investigation needs to be completed through specific means. The internship was a great opportunity to work with those individuals, and learn about the cases that are being brought to trial.

You wrote about some of your findings in an op-ed published in Foreign Policy in Focus. How else have you continued your work on these issues since returning to Brown?

I ended up writing my thesis based on the work I was doing. In my thesis, I look at the broader issue of how American weapons are enabling violence in Mexico, specifically. The thesis is a much broader version of my op-ed. I’m looking at how the historical background of the United States is involved in Mexican politics and the Mexican drug war, how we funded it and supported it. For example, one of my chapters is on the legal flow of weapons — weapons that are approved by the US government and come from US companies that enter Mexico, are sold to the government and then disappear. The commission tracked over 30,000 guns that originated in the US and disappeared after being sold. Most of these transactions occurred through corrupt state governments or corrupt local police forces. Using data provided by the commission, I was able to discuss and track this legal flow of weapons. I also look at the illegal flow of guns. While Americans generally think of gun-control issues as domestic, the vast majority of guns sold or used by drug smugglers, or in violence in Mexico, are American guns.

How does this work build off of what you’ve done at Brown?

Through my courses in development studies, I learned that from my position as an American, even as a Colombian American, you cannot just go in and try to find a solution. That is why I leaned toward working for a Mexican run organization, so that I could support people who are already working on these issues, rather than trying to come in with a completely new solution.