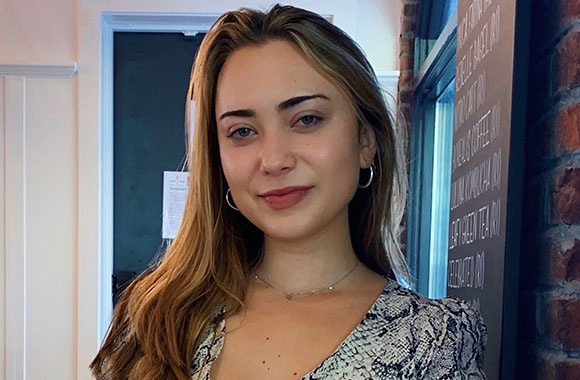 This semester you are interning in the office of Senator Sheldon Whitehouse (D-RI) with the Brown in Washington program. What have been your primary tasks working in his office?

I’ve definitely done my fair share of “intern tasks” around the office — scanning, filing, answering phones, etc. — but as I have formed closer relationships around the D.C. office, I have also had the opportunity to assist on many more substantive projects. I work directly with our environment, health care, communications, and judiciary teams on ongoing legislative projects, memo-drafting, and constituent services, and I attend hearings and briefings all over the Hill (catch me on C-SPAN, if that’s your thing).

One of the best parts about working for Senator Whitehouse has been the time he’s dedicated to showing his appreciation for his staff — even his interns. A few weeks ago, the Senator blocked off a few hours one morning to meet us, took us to breakfast in the members-only dining room in the Capitol, and led us onto the Senate floor and into the Democratic cloakroom, the LBJ room, and some other *secret* areas around the Capitol complex.

Why did you decide to enroll in the Brown in Washington program? What have you found to be your favorite part of the program so far?

Well, I initially didn’t think I wanted to spend an entire semester away from campus. I love Brown and, as a junior, I am suddenly very familiar with how quickly time seems to pass in college. But I went to the abroad fair with a few friends during the fall of my sophomore year, and I spoke to some students from a previous Brown in Washington cohort. They told me about their experiences interning in D.C. and the amazing professors and co-curricular activities that BiW provides for its students, and I was convinced pretty quickly that it was something I wanted to do. So I applied, was accepted, and committed to enrolling — all within a few months.

There are a lot of parts of the program I love, but hands down the best part so far has been the exposure I’ve gotten to influential people and organizations, both through the meetings my professors have worked so hard to organize for us and by working on the Hill.

I have run into and/or spoken directly with the entire congressional delegation from Rhode Island (of which there are four members, so not a hugely daunting task), Senators Elizabeth Warren, Mitt Romney, Patrick Leahy, Kamala Harris, Lindsey Graham, Richard Blumenthal, Representative Maxine Waters, David Wade (the former Chief of Staff to Secretary John Kelly), Jeffrey Goldberg (editor-in-chief at The Atlantic), and many other prominent figures. It’s really been an amazing few months, and I’m looking forward to being able to brag to my friends coming home from abroad experiences in Cuba or South Africa or London about all of the cool things that I did in the United States while they were gone.

How do you think your classes at Watson and your extracurriculars at Brown — like being a managing editor at the Brown Journal of World Affairs — prepared you for your work on Capitol Hill?

Capitol Hill is in a constant state of motion. Especially right now, as you might imagine, with impeachment looming — and discoveries emerging every few hours involving official corruption at basically every level of the executive branch — it’s so easy to get distracted by the turmoil and forget that you still have a job to do.

I’ve found that being involved with a wide range of activities throughout my time at Brown — the Journal, HerCampus, and the Title IX Council, as well as some other extracurriculars and a full course load — has really taught me the importance of knowing how to prioritize certain tasks and compartmentalize distractions.

During any given day on the Hill, there may be 12 congressional hearings, celebrities getting arrested on the steps of the Capitol, and climate protestors occupying the lobby of our office building, but I still have to respond to 25 unread emails in my inbox and finish redlining a bill to send to a potential Republican co-sponsor before lunchtime. So knowing how to process all of these moving pieces, coming up with a strategy for getting all of my work done (and done well), while still taking advantage of all of the opportunities I have to witness history as it is being written, is a skill that I doubt I would have if not for my experiences at Brown.