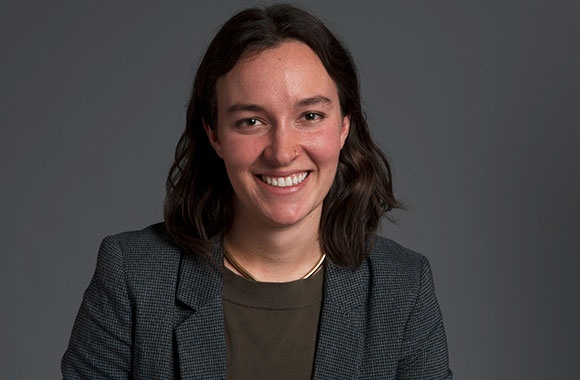 This February, you used your thesis research to testify in front of the Rhode Island House Judiciary Committee in support of House Bill 5196, which mandates that people are not criminalized for the inability to pay court fees. Could you first describe what your thesis focused on?

For my thesis, I studied the implementation of a law that was passed in Rhode Island in 2008. The law was designed to protect low income people moving through the criminal justice system from being arrested and incarcerated for not paying what are essentially administrative fees alongside their sentence. For example, imagine someone gets a misdemeanor conviction for loitering — in addition to whatever fine they get, they also get taxed $93.50 by the judiciary. It’s simply a revenue generating mechanism. If they fail to pay off that balance in a timely manner a warrant is automatically issued for their arrest and they go to jail.

Back in 2008, the state was trying to ensure that people who were unable to pay those fees were not incarcerated, so they passed a law which say that courts must assess all defendants’ ability to pay and consider waiving the fees for low-income defendants. For my thesis, I studied whether this was actually happening: Was the judiciary actually assessing people’s ability to pay? I found that the judiciary wasn’t accessing defendants’ ability to pay in any way, at any time throughout their conviction or post-conviction. Defendants were still going to jail, and being arrested, and this was happening at the same exact rate that it happened back in 2007. I estimated that at least 50% of those who were arrested were unemployed and/or had no consistent source of income with which to pay off their fees.

When I was planning my thesis I knew I was interested in criminal justice reform and I wanted to study a local topic so that I would have the opportunity to interact with local lawmakers and advocates. My advisor, Professor Ross Cheit, connected with me with Nick Horton at OpenDoors Rhode Island, a non-profit that serves formerly incarcerated individuals, and several other non-profits so that I could talk to people working in criminal justice reform in the state about the issues that they were working on. OpenDoors first studied this problem in 2007 and had gotten the initial law passed, so they were really interested in revisiting the issue and getting an updated understanding of what was happening. I connected with them and they helped facilitate the rest of my research.

What was your experience testifying in front of the House Judiciary Committee?

It was a really unexpectedly gratifying and exciting experience. After college, I moved out of the state and wasn’t able to successfully lobby local lawmakers for improved legislation before I left. Luckily, OpenDoors and a broader criminal justice coalition in Rhode Island continued working on the issue. Just two weeks ago, I heard from Nick at OpenDoors, who explained that a coalition of nonprofits had gotten a bill together that would close a loophole in the law and make it stronger. When I arrived at the state house, I found out that this local group of advocates had already read my thesis and that it was a big part of what energized them to return to the issue. At the hearing, I was able to not only testify and share my findings with my own testimony, but I got to watch other people name my research, and highlight specific aspects of it that had compelled them, in their testimony. I hope that ultimately the new legal push will be impactful, but it was also just such an amazing milestone to be able to return to my research and celebrate it.

You now work as an associate at Education Resource Strategies, a non-profit that works with “district, school and state leaders to transform how they use resources (people, time, and money) to create strategic school systems” to better prepare students for their future, according to their website. Could you describe your work with ERS?

As a consultant for ERS, I work with school districts all over the country to assess how they use their resources — people, time, and money — to meet students’ needs and close achievement gaps. This could mean anything from changing the way that schools are funded (to get the highest-need schools more funding), or changing the way teachers are hired. Even though I’m not working in criminal justice anymore, I’m still working on how to help public organizations improve the way they serve constituents, so that is the relationship I see between what I studied in college and what I’m doing now. Whether I stay in education or not, I certainly want to stay on this path of working to help bureaucracies function well and fulfill the duties they’re meant to fulfill.

How do you think your Public Policy studies at Brown prepared you for this work?

When I was applying for this job and many others, a really common interview question that I was asked was to describe a time that I used a large dataset to answer a research question. My thesis was the answer I gave every single time because it was just such a great opportunity to work with data, especially government data. It served as a tangible example of me doing the work that these jobs were looking for, so it was definitely instrumental in my career search. In general, throughout my public policy studies at Brown, I was asked to think about the complex work of implementing policies successfully, and that is the same exact thinking I do at ERS. I would really urge the University to maintain a US-focused Public Policy concentration moving forward. In my opinion, there are very few other majors that are so focused on applied learning and building skills you need after Brown, while doing it in such an interdisciplinary way. This type of learning was critical to my success after Brown.