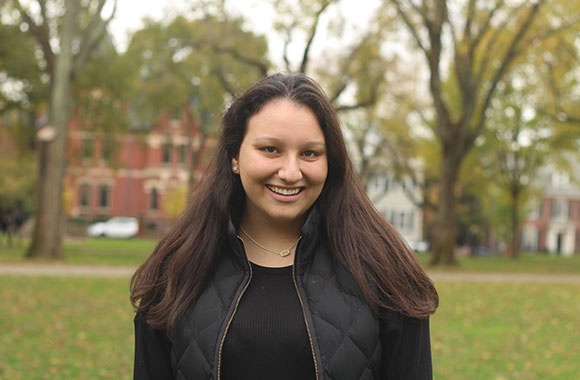 Congratulations on being awarded the Truman Scholarship! What was your reaction when you found out that you had been selected as a recipient of the scholarship?

Last Monday, I received a surprise email from President Paxson asking me to meet with her later that week. I didn’t fully know what her email meant, but I assumed it was regarding the scholarship. I was thrilled, humbled, shocked and honored once I learned that I actually won. It has taken days to fully process. President Paxson put together a reception with all of my academic advisors and mentors — even my mom was there.

This May, you will participate in the Truman Scholar Leadership Week in Liberty, Missouri. What are you looking forward to about that program, and getting to know your peers?

During the Truman Scholar Leadership Week I will meet fellow scholars from across the country, which I am super excited about. I met two girls during my interview process who are so deserving of the scholarship and I can’t wait to see them again. I am looking forward to gaining insight from everyone’s unique perspectives that stem from the different kinds of work they are pursuing. I am also excited to be in a community of people who are as passionate about public service work as I am. TSLW takes place in Liberty, Missouri, where we will work on policy projects and community service work together. At the end of the week, there will be an awards ceremony that our families can attend, where we will officially receive the scholarship.

Here at Brown, you are working on a research project about the ethical implications of recusals of Rhode Island State Legislators — can you explain what this project is?

I have been working on this project with my Public Policy advisor and mentor, Professor Cheit. Together, we are investigating twelve years of recusals in Rhode Island — between 2006 and 2018. We’re still in the early stages of the project, but we are investigating how frequently state legislators recuse, why they recuse, and the policy implications of these recusals. Some of this work involves pouring through recusal forms and some of it involves literature review of other somewhat similar studies or other related research in order to build a political model of legislative recusals, which has not really been done at the state level. I have lived in Rhode Island since I was 13 and Professor Chiet is very involved with the Rhode Island Ethics Commission, so we are both interested in looking at recusals and their political and ethical impacts in Rhode Island, specifically. We are in the very early stages of this research, but I look forward to turning this research into my Public Policy Capstone Project.

Before I was elected to these positions, I had served in other roles which have really informed my current work. For example, in the College Democrats of Rhode Island, I first served as Speakers and Events Director; in this position I worked to put together the annual College Democrats of Rhode Island convention, which involved coordinating with elected officials, their staff, and members from each individual CDRI chapter.

As Membership Director, I now get to work more extensively with people in chapters across the state, which allows me to see what other CDRI chapters are doing that the Brown College Democrats could also implement while considering ways that the parent organization can better support individual chapters. I am running for President of CDRI this year, so it’s been great to be able to use my experiences in my other two roles to inform my current campaign.

In Brown College Democrats, I was first elected as a first year representative. Soon after, I became the Membership Director, where I handled member disputes while trying to make our spaces more inclusive to folks of all identities. For example, one concrete way that we’ve been working on this is through our caucus system which is something that I have worked on as President. I know that having an understanding of a large organization on campus will inform my professional and interpersonal work moving forward. Whether working with other groups on campus or understanding how to program events and work with people of diverse backgrounds, these experiences have been valuable in that they have solidified how much I love doing this work — I really couldn’t do anything else.

When did you become interested in Public Policy and how do you think you will continue to use what you’ve learned through your studies within the Watson moving forward?

I took Introduction to Public Policy with Professor Hackey my freshman spring and fell in love with it. I had always been interested in politics and government, but had figured I would pursue this passion in my extracurriculars. I really became interested in the policy making process from an academic perspective once I got to Brown. I have become interested in the intersection between social justice movement and politics from a historical perspective, so my concentrations have really complimented each other. Right now, I’m taking City Politics with Professor Morone, who lectures about political work from a historical perspective. I intend to take some of what I’ve learned from this class into my future work as a civil rights lawyer, and hopefully, into my public service work as an elected official.

What are your plans for after graduation?

The Truman Foundation actually encourages Truman Scholars to take time off between undergraduate studies and graduate school, and I definitely plan to do that. During my time off, I intend to work on a 2020 campaign and hopefully do some other work for progressive policy organizations, specifically regarding voting rights.

Later, I intend to go to law school for civil rights law. I believe that through studying law, I can become the best advocate that I can be. Right now, I try to advocate for causes, whether that is protecting choice in Rhode Island, making sure we don’t have high-capacity magazines on our streets, or standing in solidarity with Stop and Shop workers on the picket line. However, I think I could have a greater impact after I gain relevant legal experience, which will also inform my work in politics.

The application process itself helped me to better understand what I want to do in the future. When my advisors pushed me about certain aspects of my application, they really helped me clarify what I wanted to do and why I wanted to do it. Going for the Truman is a lot of work, but I totally recommend that anyone who is interested — particularly Public Policy concentrators — go for it.