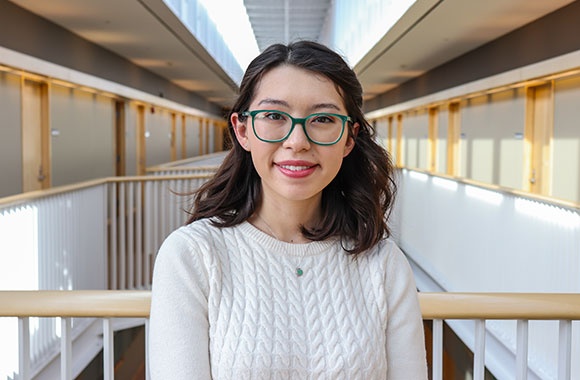 Tell us about your time working in Washington throughout the Summer and Fall of 2018. You worked with the National Council of Asian Pacific Americans (NCAPA) a coalition of different Asian American advocacy groups, and in Arizona Senator Kyrsten Sinema’s congressional office. What did you take away from these experiences?

I was in Washington over the summer and the fall, and it almost felt like I was living history. For example, I worked with the NCAPA over the summer, and I was there for the Families Belong Together protests. In the days leading up to the rally, I got to see of lots of different people trying to push different levers to enact change — both from my policy advocacy viewpoint (with the NCAPA), and from hearing things that were happening on the Hill. Later in the Fall, George H.W. Bush passed away, and a couple Hill interns and I went to see him lying in state in the rotunda— and it really felt like everything was happening around us all at once.

What I really took away from my experience was seeing how people make change. Whether that means pushing policies up from grassroots movements, like from the advocacy side, or seeing the relationships that form on the Hill in action. For instance, one morning I went to get the signature of Representative Brian Fitzpatrick (R-PA) on a letter calling for the long-term reauthorization of the Violence Against Women Act. I tend to think of bipartisanship in the abstract, and it was in those really small but important moments that I got to see these abstract ideas playing out in the real world.

What were some of your day to day responsibilities as a Congressional Intern?

Almost every morning, I would check out the Whip Watch app: first, just to see if we were in session, and if we were then, what bills were being considered that day. While I spent most of my time in our office, I wanted to make sure that I knew what was going on around me. My responsibilities were primarily helping to support the office by helping out with administrative work, some policy research, and interacting with constituents. One of my favorite parts of my internship, however, was always feeling connected to my community back home. Every day, I got to hear about the issues that really mattered to people from back home and helped to pass any comments or real concerns that they had. I also had the chance to lead Capitol tours, and interact with community members in person. One of of the tours that I gave was actually to a family that I knew, and I hadn’t realized they were the ones I would be guiding around before it started. So even all the way in DC, I got to tangibly serve my friends, family, and so many more, and it reminded me that home isn’t so far away.

How did the midterm elections shape your time on the Hill?

As an Arizonan, I was so incredibly happy and excited to see Kyrsten Sinema be elected to the Senate. For the first time in my life, I was represented by a Democrat and by a truly inspirational woman. It really was another moment during my time in D.C. where I knew I was living history. Of course, it was incredibly nerve wracking — not even as a Congressional intern, but just as an ordinary Arizonan living through this election. After the midterms, I definitely learned more than I could have ever possibly imagined about what a transition actually looks like — from the physical process of moving supplies to another office to the cultivation of new relationships.

How did your studies at Brown, and within the Watson Institute, influence your experience?

I think that one of my favorite things about being in DC for that chunk of time, and being an Engaged Scholar was getting to see the theory that we learn here at Brown in practice. We spend so much time learning about policies, and how policies get made. However, seeing that political process actually happening in front of you — even just seeing the people who have that power — was incredibly fascinating to me. I learned so much just through observation, by watching the ways people interact and how they communicate with each other, and seeing what these people who existed in abstract to me are actually doing on the ground.

What do you hope to do next?

I’m about to graduate, and I know that I want to end up back in DC. I know that there is so much going on there. It’s a little cliche, but I want to be a changemaker and really just want to continue to try to make the world a better place in whatever way I can.