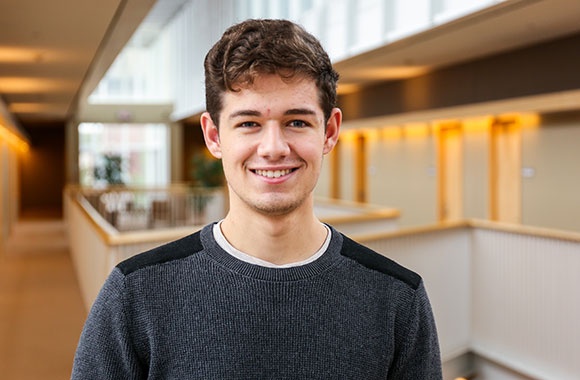 Could you describe the work done by the Brown Institute for Policy, where you’ve served as Advocacy Director for nearly a year?

The Brown Institute for Policy is Brown’s only student run think-tank, founded in the spring of last year. I was brought on because I worked on the Governors’ reelection campaign, and so Rohan Dalvi ’21 asked me to join so that we could utilize my connections to help build and push some common sense, data driven, student created policy. Throughout last year I served as the Advocacy Director. In that role, I reached out to find us sponsors in the state house and talked with members of other government agencies or community organizations. My time was spent meeting with people around Providence, helping guide the research teams, lobbying at the state house, or preparing testimony for when we testify before committee.

The goal of the Brown Institute for Policy is to leverage Brown’s resources while involving students from out of state and those not studying within the public policy program in the state’s policy making process. We have three research teams — water quality, refugee education, and mental health — which each have a very specific project area. Each team conducts their own research and reports to the research director, and then we discuss whether their proposed policies are politically viable. Our goal is to create legislative and community solutions to the issues that we’ve focused on.

What are some of the topics the research teams at the Brown Institute for Policy are focused on now?

Our mental health team is probably the closest to having a succinct policy idea, which is a rotating clinician model. We’ve been working with the Governor’s office on student mental health and have focused on how we can better provide mental health services as there is a huge deficit in the availability of mental health resources for students and teachers. The water quality team is looking specifically at the disparities in water quality between a place like the East Side and the West End of Providence. To do this, they have examined differences in lead pipe remediation, and have talked to community partners to determine what steps can be taken to best change the status quo.

What do you think is especially important about involving Brown students in Rhode Island politics?

Rhode Island has a big “brain drain” problem — a lot of kids come here, stay for a while, and then they leave. Because of this, Brown also receives criticism from the community, and so we are focused on making sure that students can leave a positive impact on Providence, and on the state of Rhode Island. By using the resources we have and knowledge we receive here at Brown, one of the most important things we can do is make sure that we maintain community connections.

This summer you worked as a Labor Relations Intern in the Rhode Island Department of Administration. What did your job entail?

I originally started doing budget strategy for the governor's office. However, once the legislative session wrapped up I had nothing to do for the summer, so the office forwarded me to the Department of Administration. There, I worked within the Human Resources department, for the labor relations division. My boss was the deputy personnel director and he was in charge of managing seventeen different union contracts for all unionized state workers. There are 14,000 employees in the state and thousands of those employees are in labor unions.

We would go onsight and listen to the complaints that union members were lodging against the state, and then we would write opinions based on the evidence and the hearings to determine the next steps. I also did a thorough review of all of our union contracts and created a map that explained how every single union get paid so that questions could be fielded quickly. Also, just generally working on deciphering provisions within contracts, looking at the differences between contracts, and then also proofreading hundreds of pages of contracts as they were getting ready to go to administrators desks to be signed. I probably produced 100-200 pages of work during my eight week internship, because I drafted and conducted research for long-form memos explaining why we accepted or denied a grievance.

How have your public policy studies here at Brown influenced your work outside of class?

When I first came to Brown I took a class called “Political Communication” with Professor Richard Arenberg, and I realized that I really enjoy how politics and policy is communicated to people. Since then, I’ve been trying to keep along the government, law, and ethics track within the public policy program so that I can take classes that deal with being a practitioner of public policy. Specifically, I enjoy studying how policymakers think when they create policy, and how the actual policy might differ from the vision behind it. This involves looking at how people actually interact with policy makers, and I am really interested in advocacy work and in legislative work because I’m a very social person and I like interacting with people face to face.