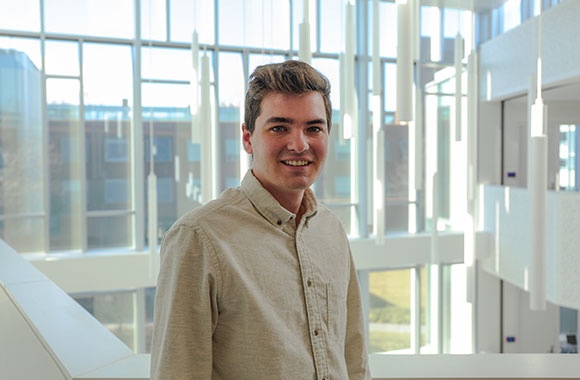 Last semester, you worked at Al-Jidara, a United States Agency for International Development (USAID) subcontractor in Amman, Jordan while studying abroad. Can you describe this experience?

Just to provide a quick background, Al-Jidara provides governments, the private sector, NGOs/CBOs and international organizations with economic, development, and management consulting services. They bid on any number of contracts that USAID releases every year, as well as contracts from other organizations including the UN and the European Union. While I was there, I primarily worked on two contracts that Al-Jidara was carrying out at the time, one of them being the USAID Jordan Economic Development Program, and the other was the Iraq Governance Performance and Accountability project, or IGPA. For both contracts, I helped the staff who were tasked with executing contracts by conducting primary and secondary research from government sources, donor sources, national institutions, other consultants, etc. Both contracts offered me a really great opportunity to interact with and observe political, social, and economic matters that are not only really significant for Jordan and Iraq respectively, but for the Middle East more generally.

The health of Jordan’s economy is so incredibly central to its stability. To be sure, the catastrophic civil war in neighboring Syria, the Israeli–Palestinian conflict, and ongoing unrest in Iraq certainly pose serious challenges to Jordan. But the Jordanian government, at the present, is really struggling to be able to provide for its citizens and the still-enormous refugee population. What the government needs to do, and what we were working on in this contract, is to manage high unemployment rates, encourage investment and entrepreneurship, and create opportunities for specifically young people and refugees to find meaningful, well-paying work. I was really excited to work on that because it is through these socio-economic routes that, for example, potentially destabilizing social unrest and extremist group recruitment are prevented or at least limited. Working on IGPA was also such a valuable experience because the project focused on eliminating corruption and streamlining the Iraqi government's ability to deliver services to its citizens, which is one of the essential reasons why the Iraqi people are out protesting on the streets and have been protesting on the streets since last October. It was really amazing to work on these projects, knowing that if we did succeed there would be a real impact on people’s lives in Jordan and Iraq. Beyond this, I also helped the staff prepare responses to Requests for Proposals, or RFPs, that were released by contract issuing organizations like USAID, and specifically worked on an RFP issued by the E.U. relating again to economic growth in Jordan.

Was this an experience you expected to have while studying abroad?

When I was preparing to study abroad, I had no idea that an opportunity like this would be available to me. I was really excited when I arrived and the program staff informed us that there was a pretty large number of internship opportunities available to students studying abroad in Jordan. I decided that this was such a unique opportunity that I couldn’t pass up — the ability to actually work in the Middle East, and in a Jordanian office, where I was immersed in different elements of society that we wouldn't normally see as students.

What did you find to be the most meaningful aspect of this work?

One of the most wonderful aspects was the opportunity to become close to the staff members, and finding a second family in them. Reflecting Jordanian society in general, the staff also came from diverse backgrounds as Palestinian-Jordanians, Circassians, Kuwaitis, and beyond. Everyone had important and powerful perspectives and stories to share. I've been taking Arabic for the past three years and was taking Arabic while in Jordan as well. The working language in the office was Arabic 75% of the time, which was a great way for me to practice my Arabic in a unique setting. Still, probably the most meaningful aspect was that this was an opportunity for me to mobilize my life long passions and tools from my academic background to advance causes that I really, truly believe in.

I also think that if you intern or work in the U.S for organizations that deal with the affairs of other countries, the emphasis can often become U.S-centric and it can sometimes be hard to see the impact or to be able to understand the gravity of what you're working on from the perspective of the people most affected. But if you're in the country itself and you are talking to people every day about the problems that they and everyone else face, that type of access and exposure provides a barrier against U.S or Western-centrism and you have even more motivation and a more powerful understanding of exactly how what you are working on affects the public.

How did your work and studies in Jordan expand upon your International Relations studies at Brown?

I think the most important thing that I learned at Brown and applied to this experience was critical thought. In studying International Relations, I’ve taken courses on sociology and globalization, global governance, ethnic politics and conflict, anthropology and global social problems, and more. These classes taught me to really critically engage and deconstruct, for example, harmful Western-produced concepts of development. Going into this experience, I really thought about what our purpose was as an organization, and how we could execute our work in the most conscious and ethical way possible. My studies at Brown have been so interdisciplinary and I found that to be incredibly helpful, as engaging in a region that is so complex requires a really strong background in a range of disciplines, from history and political science to economics and anthropology.

How has your time at Brown, and at your internship, shaped your thinking around what you hope to do after graduation?

I think prior to this experience I had a sort of unchallenged assumption that I would live and work in the United States after graduation. I didn’t really know if I had what it takes to live and work abroad, but after living and interning in Jordan for four months I found that it is, of course, really, really powerful and important to actually work in the country and region that I'm trying to serve. Both my time at Brown and in Jordan have encouraged me to push the boundaries of my comfort zone, both academically and non-academically. Along with that, I think these two experiences have also helped me to significantly change the way I think about my life after graduation in a way that is far more open and liberating.