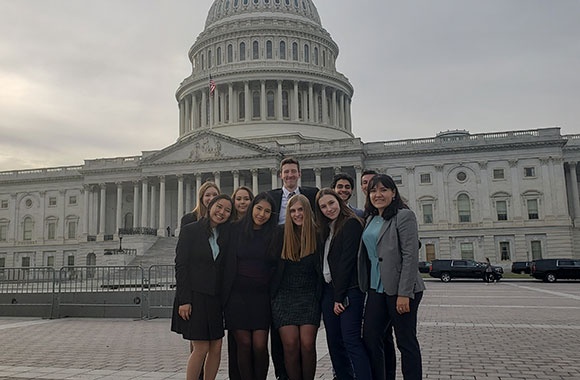 The Watson Institute for International and Public Affairs, in collaboration with the Swearer Center at Brown University, is pleased to announce the newest participants of the Brown in Washington program for the Spring 2020 semester. In line with the missions of both the Watson Institute and the Swearer Center, these ten students represent a variety of backgrounds and majors and will spend the semester building on their knowledge and experience in the public policy sphere.

The Brown in Washington program offers students a semester living and interning in Washington, D.C., working with top public and nonprofit sector agencies while completing a full course load with Brown University faculty. Throughout the semester, students have the opportunity to meet with distinguished scholars, alumni, and practitioners and visit government agencies and organizations, including the US Department of State, the UN Foundation, and the National Museum of African American History and Culture (NMAAHC).

This program is currently accepting applications for the Fall 2020 semester! For more information and to apply, visit swearer.brown.edu/biw. The priority application deadline is February 21, 2020, and the regular deadline is March 6, 2020.

Luke Angelillo is a junior at Brown University concentrating in History and Political Science with a focus on American Politics. This semester, he is interning with the Office of Senator Sheldon Whitehouse (D-RI). On campus, Luke serves as a staff writer for the Brown Political Review, a History DUG Leader, and a senior editor for the Brown Journal of History. These opportunities have helped him develop strong writing and communication skills, and proved especially valuable this past summer when he worked as an intern for Senator Richard J. Durbin (D-IL). As a native of Wheaton, Illinois, Luke commuted from home to the Senator’s Chicago office, often spending his train rides taking LSAT practice tests. Luke plans to attend law school following graduation and eventually practice constitutional law with the dream of becoming a federal judge. As an avid basketball fan, he also hopes to one day play a game of pickup on the court above the Supreme Court chambers.

Cynthia Bo Huen Ng is a junior at Brown University concentrating in International Relations with a regional focus on East Asia. Born and raised in Hong Kong, Cynthia is intrigued by how culture and ideology reflect and shape the policy-making process. Her interests lie in social justice, women’s rights, and international affairs. At Brown, she is a Team Captain of Brown Mock Trial, Treasurer of the Brown-RISD Hong Kong Student Association, and a Volunteer Investigator at the Rhode Island Commission for Human Rights. In her free time, Cynthia enjoys listening to indie electronic music and hiking. This semester, she will be an intern in the Office of Congressman David Cicilline (D-RI).

Peter Deegan is a junior at Brown University concentrating in sociology and economics. This semester, he is interning with the Council of Economic Advisers. At Brown, Peter is a research assistant at the Taubman Center for American Politics and Policy focusing on applied education policy. Previously, Peter interned for Senator Charles Grassley (R-IA), Senator Joni Ernst (R-IA), and Congressman Rod Blum (R-IA). This past winter break, Peter interned at the NYC Department of Education, where he evaluated the efficacy of educational initiatives and applied for grants. On campus, Peter serves on the Undergraduate Finance Board. He has also served on the executive boards of Brown College Democrats, Brown Pre-Law Society, and College Democrats of Rhode Island. Peter’s most meaningful experiences at Brown have been as a Brown Refugee Youth Tutoring and Enrichment (BRYTE) tutor, a Housing Opportunities for People Everywhere (HOPE) outreach worker, and a BruNotes music instructor. In his free time, Peter enjoys debating politics in non-credit Watson Institute courses and Philosophy, Politics and Economics (PPE) Society pizza dinners.

Laura MacKenzie is a junior at Brown University studying Health and Human Biology with a focus on Global/International Health. She is especially interested in the field of immigration, which she has explored through four semesters of English teaching in the Providence immigrant community, her coursework, and research into the effects of immigration on Argentina's past and present as a Historical Memory Fellow through the Consortium for Advanced Studies Abroad (CASA). She aims to work in the field of immigration policy, working for immigration rights and challenging prejudiced immigration policies and sentiments in our current political setting and national landscape. This semester, she is interning with Public Citizen.

Arianne Motte is a junior at Brown University concentrating in Political Science on the American Politics track. She spent the past summer interning in the District Offices of Congressman David Cicilline (D-RI) and Senator Sheldon Whitehouse (D-RI). As a first-generation college student, she is particularly interested in education reform to increase accessibility to higher education. Outside of Brown, Arianne works as a Democracy Coach with Generation Citizen to provide general civics education to students in Providence to prepare students to effectively participate in our nation’s democracy. She also works with TutorOut to tutor K-12 ESL students to improve their English reading, writing, and speaking skills. This semester, she will be an intern in the Office of Congressman David Cicilline (D-RI).

Florin Najera-Uresti is a junior at Brown University pursuing an independent concentration in Migration, Borders, and Identity Studies. Born in the Rio Grande Valley on the southernmost tip of Texas and raised on both sides of the border, Florin has always been passionate about migration and hopes to pursue a career serving the needs of migrants. In the year between high school and college, she took a gap year in which she lived in Germany and volunteered at a refugee camp leading language and cultural immersion courses. During the school year at Brown, Florin volunteers at Hope High School as an ESL teacher's aide and is working to establish a program for Brown University students to volunteer their skill sets to the migrant community at Hope High. Florin is also an avid cook, dancer, and enjoys learning new languages. This semester, she is interning with Hispanic Federation.

Antonella Portugal is a junior at Brown University concentrating in Public Policy and intending to declare Political Science as well. This semester, she will be an intern with the Justice Policy Institute. Antonella is originally from Arequipa, Peru and now lives in Connecticut. Going through the lengthy immigration process as a child and becoming a citizen in 2011 is what ultimately led her to be interested in immigration reform and equity. Since coming to college, she has become a researcher for the Brown Institute of Policy, a member of Brown Model UN, and a member of the Brown Immigrant Rights Coalition. Over the past school year and summer, she has worked with the Rhode Island Center for Justice as an interpreter and intern, aiding in client intakes, translating community resource guides related to landlord-tenant rights, and researching cases of inmate abuse at the Rhode Island Department of Corrections (RIDOC). She has also spent the past semester abroad studying translation and interpretation at the University of Granada in Spain. Antonella hopes to continue her work in promoting access to justice for immigrants and other marginalized communities through research and legislation.

Emma Rook is a junior at Brown University concentrating in Political Science, specifically the American Politics track. Originally from Redding, Connecticut, Emma has lived the majority of her life overseas. Spending her first years in Japan, and elementary and middle school in China, Emma graduated valedictorian from her high school in Turkey. In 2017, she was also selected as one of two delegates to represent Connecticut and the Department of Defense in the United States Senate Youth Leadership Program and was honored to meet the President of the United States, Vice President, Chief Supreme Court Justice, Senator Blumenthal (D-CT), and many other distinguished individuals. She returned to D.C. the next summer to intern for Senator Blumenthal (D-CT). Emma’s passion for politics and government has led her to become more involved in local state government as well as interning in the Attorney General’s Office and the Senate Fiscal Office and canvassing for Governor Raimondo’s reelection campaign. On campus, Emma is the founder and editor-in-chief of the Brown Undergraduate Law Review, a curator at the Global Gallery, and a member of the Brown Cheer Team. This semester, she will be interning at the Supreme Court of the United States.

Mandana Vakil is a junior at Brown University pursuing a double concentration in Economics and Public Policy. This semester, she is interning with the Department of Education. Born in Warsaw, Poland, Mandana has had the experience of living abroad her entire life, while being an American citizen before arriving in Providence. She is particularly interested in international economics and development, macroeconomic policy, and educational equity and access. Mandana aims to develop quantitative economic skills in devising progressive public policy to work towards the betterment of society. At Brown, she is the Marketing Chair for the Economics DUG and Chief of Staff for the Brown University Crisis Simulation, Brown's Model UN conference for the college circuit. Her interest in education arose through a multitude of extra-curricular involvements. Mandana is an intern at Inventing Heron, a startup that promotes stories about the professional world for young adults to inspire them to pursue career goals, where she has worked on developing curricula for Rhode Island schools with historically underserved students. Comparing this experience to that as a teacher at the Wheeler School in Providence has made her acutely aware of the discrepancies in education quality and accessibility experienced by students in close proximity to one another and has made her passionate about working towards education equity. This past summer, she interned at LearnLaunch, a nonprofit in education technology in Boston, where she conducted an independent research project on how individuals can get involved in the EdTech industry.

Samer Wahood is a junior at Brown University concentrating in public policy and computational biology. Born in Riyadh, Saudi Arabia, Samer grew up for a few years in the Middle East before moving to Chicago’s southwest suburbs, which he calls home. Having family affected by the Syrian refugee crisis, he is passionate about refugee health and access to resources post-migration. In high school, he was involved as a medical translator in Greece’s refugee camps. Since coming to Brown, he has been a coordinator and tutor for Brown Refugee Youth Tutoring and Enrichment (BRYTE). As a coordinator, he has had a direct role in securing finances for community events and college preparatory resources for the 180 refugees in the program, liaising between BRYTE and Rhode Island’s refugee health clinic and managing a team of volunteer tutors. He also works directly with a student to offer weekly tutoring in math and english. Through research and legislation, Samer hopes to deeply understand the driving forces behind social issues like the Syrian refugee crisis and to gain an understanding of how he can play a role in creating solutions. This semester, he is interning in the Office of Senator Tammy Duckworth (D-IL).