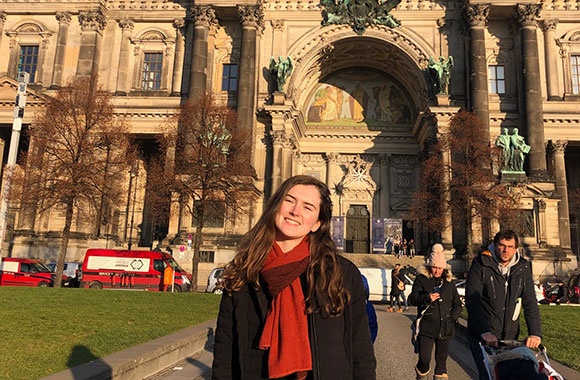 On March 12, in response to the growing spread of the coronavirus, President Paxson announced that for the remainder of the Spring 2020 semester, Brown classes would take place remotely. Classes were cancelled for the week of March 16 to enable students living on campus or in Brown-owned properties to pack and leave, and to give faculty time to transition their courses to remote learning.

At Watson, we wanted to know how the transition was going. Below, Colleen Cronin ’21 describes her experience. Colleen is a student in Stephen Kinzer's senior seminar, International Journalism: Foreign Reporting in Practice.

Read Colleen's article, as well as those of her classmates.

Originally, this course was to culminate in a reporting trip to Cost Rica. Instead, you wrote about people in Providence. How did that go?

I felt really glad to still get a chance to do some reporting. I wanted to take the class because I want to be a journalist, maybe even a foreign correspondent, and I thought learning from Professor Kinzer and getting some more practice at reporting in Spanish would be a positive experience. Our whole class was disappointed when the trip was cancelled, but I think we all also put it in perspective: everyone sort of knew that campus would close down, and more than that, people were getting very sick all around the world. So, to let a cancelled trip really get you down just didn't seem equitable when looking at all the other things that were happening.

Instead of going to Costa Rica, I learned something about a nearby community. I profiled a really wonderful woman who volunteers most of her time at a church on Federal Hill. Just having a conversation with her about her life and the community she has created was really cool, and it felt like an honor to get to write down her story.

What has been the biggest challenge of remote learning for you?

My dad is a police officer and an essential worker, and when I first got home after evacuating from campus, that made me really angry. I was so upset that he was still working and exposing himself, and my family, to the virus. I thought that going home would be a relief — I was no longer around a lot of people, which was a big stressor in my last days on campus with increasingly strict CDC guidelines about group gatherings coming out every day. But knowing that the risk was still there when I got home, I had trouble coping with that. I think it is still an underlying worry, but it does help that I'm not alone and that many friends have medical workers, grocery store clerks, delivery people, and first responders in their families, too, who can't really socially distance themselves. My problem is not unique; other people are stressed, too.

Has there been a pleasant surprise, a positive you didn’t anticipate?

I appreciate the little things a lot more. Not being able to be in a meeting in the same room as other people, not picking up a print copy of the BDH, not drinking an iced coffee from Dunks, not doing those things has been much harder to reconcile than I realized. So, with that said, I think I now understand how important the “small” moments are. For now, sunny days, coffee in the morning with cream, and time to write in my notebook are the things I most appreciate in my day.