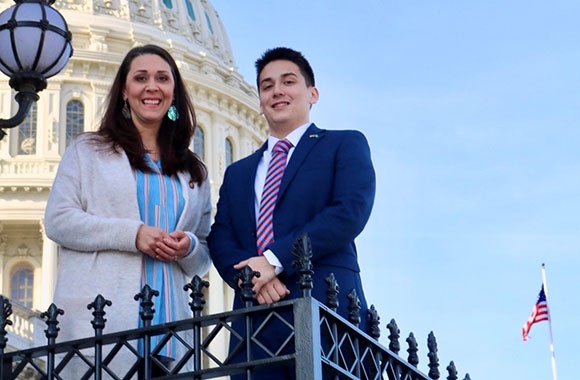 What did you do last semester in Representative Jaime Herrera Beutler's office and with the Brown in Washington program?

As a constituent from Congresswoman Herrera Beutler’s district (Washington’s Third District), my duties primarily related to constituent services. Some of my direct work entailed providing tours of the Capitol to visiting constituents, as well as answering phone calls and logging the constituent’s message or question into a database so they could receive an official response from the Congresswoman at a later point in time. My indirect work mainly revolved around research (at briefings or online through the Congressional Research Service) to help draft response letters for the legislative assistant and the staff assistant. Of the two, I found the direct work more enjoyable because, as a citizen in Jaime’s district, it allowed me to hold candid conversations with constituents and hear their concerns and understand the predicaments adversely affecting their lives. Through these discussions, I received a holistic and profound understanding of what’s going on in my district. While national politics are obviously important, it was a nice change of pace to focus on local issues, such as Ridgefield’s lack of affordable housing due to a burgeoning population, depleting salmon runs in the Columbia River, or the prospect of an I-5 (an interstate highway) toll bridge, among others. With regard to Brown in Washington, an interesting part unique to the program is our practicum experience with Professor Izetta Mobley. This portion of the program looks to utilize DC to examine the impact and complexity and observe its direct effects on its members.

What do you enjoy most about working on Capitol Hill?

My favorite part about working in Jaime’s office this semester is the highly personalized experience I’m receiving. Not only do I live in Jaime’s District and know the cities, landmarks, and sometimes even the street names of visiting constituents, but because I work in the House (as opposed to the Senate) we have a much smaller staff and constituency to serve. This means every staff member—including Jaime, which is awesome—knows my name. Because of the intimacy of the office, I am able to have coffee or lunch with every staffer and pick their brain, which has been a great source of career advice and direction for me. Also, because it’s all hands on deck in the small office, I’m able to involve myself in tasks and opportunities not possible in a larger office.

At the same time, experiencing history by watching the impeachment inquiry proceedings while working on Capitol Hill—sometimes happening on the other side of a wall—has been cool!

How has your work on the Hill influenced your approach to other parts of the program, like your classes?

Because all my work relates to constituent services, I am always conscious of how the individual person is affected. In my three classes (a course on social policy, an analysis of national security, and a case study of DC) I am always thinking and questioning the impact of laws and regulations on every person’s life. Hearing the stories and daily commentary of constituents made me much more aware and critical of policy than I was before this semester because I want to make sure it’s not further burdening or intruding into people’s lives.

Did your time in Washington last semester influenced your thoughts about a career you might want to pursue in the future?

Working in my Representative’s office showed me that I want to help alleviate or fix the plights that affect everyday citizens. For example, the saddest phone calls were from elderly folks calling about their high health care costs and their inability to pay them, the most common being prescription drug costs. Like any reasonable person, I wanted to immediately help these folks but lacked the power to do anything. So without sounding cliche, I simply want to help people and make the world a better place. I know my future work and career will revolve around helping and addressing problems, although I’m not sure where or how I’ll be tackling these matters. However, my internship in Capitol Hill demonstrated that despite public perception at times, Congress is able to make changes that address major concerns affecting all Americans. In fact, Jaime recently voted for a bill to lower prescription drug costs (HR 3).

While I don’t want to decide my career path as a 20-year-old in my third year of college, I could see myself returning to Capitol Hill if I felt it was the best position from which to make the most profound impact on the world. Some other places I want to gain work experience are the Civil Rights division in Attorney General Bob Ferguson's office and the Special Litigation section of the Public Defender Service in DC. In short, I’m hoping to continue to expose myself to new experiences and avenues during my studies or internships before I settle into a specific career path.