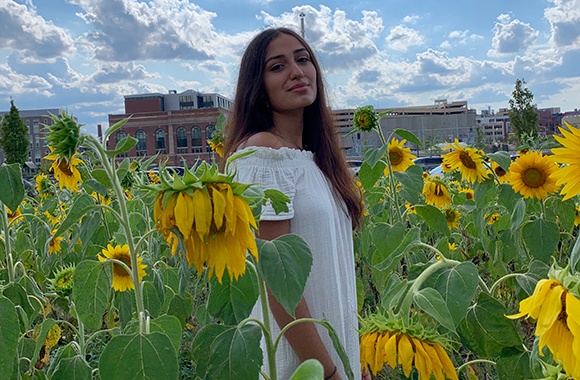 You recently co-hosted an event titled “Colonialism in the Curriculum” at the Watson Institute. Could you describe the event, and its goals?

This was a follow up event to the original, October 2019 student-led teach-in event that facilitated the creation of Decolonization at Brown (DAB). Then, DAB members shared their own experiences of encountering colonialism within Watson curriculum, which sparked conversations with faculty about changing their syllabi to better reflect some of the concerns that students have. This recent event was a partnership with the Watson DIAP committee — and it was inspired not only by DAB’s work, but also by this summer's uprisings for Black liberation and this renewed consciousness that things need to change. DAB independently created an evaluative tool to look at the syllabi of different Watson courses to assess them for what we call epistemic diversity, which is the concept of providing space for non western and non dominant scholarship and scholars. This cannot be encompassed simply through demographic diversity but requires diversity of actual thought.

The point of the session wasn’t to make value judgments on professors or the topics of their courses. We hoped it would help facilitate a broader, longer conversation about the legacies of colonialism in the knowledge we are currently learning and producing. It was informed by the understanding that if our introductory courses are not epistemically diverse, then our foundation coming into a concentration will only be built off of the canon, which further erases the breadth of non-dominant thought that is being produced around the world. So at the event, students from DAB presented our tool and discussed the course evaluations we had conducted using the tool. The DIAP committee also asked some professors to talk about what their process, including challenges and successes, has been like in attempting to incorporate some of these ideas into their syllabi and courses.

Could you give an example of the outcomes of conversations like this?

I think that we will have to wait and see what the eventual outcome of this conversation will be, but in my mind, this is just the beginning. These conversations must continue, and I hope that in the future we see more discussion facilitated on all levels within Watson, especially collaborative conversations between faculty and students. Events like these are important for students, especially underclassmen, to be aware that these conversations about colonialism and enacting change are happening, and that they are encouraged to engage in discussion as well. As a member of the Watson DIAP committee, I know that we have been considering what the next steps for facilitating additional faculty and student engagement will look like, but it is my hope that these conversations will also informally take place and encourage change.

When I started at Brown, I really wanted to study International Relations or Development Studies, but I had no idea the disturbing history of the origins of the concentration. I felt disillusioned by a lot of the material in my introductory courses. For a time, I considered leaving the Watson Institute concentrations completely and joining a new department because I was frustrated with the lack of epistemic diversity that we were exposed to. From the beginning, canonical theories were privileged and the same emphasis was not placed on non-dominant scholarship. But over time as I took higher level coursework, I realized that if I looked hard enough I could find gems of courses that really challenged me to think critically in new ways. Now, I am interested in ensuring that every course does this, beginning with the introductory courses that almost led me to leave the concentration. The Watson Institute has already made changes to its outgoing concentrations - International Relations, Development Studies, and Public Policy - and launched a new International and Public Affairs concentration. This is a multi-year reform process; however, I want to be sure that this change doesn’t just allow for the rebranding of old introductory courses under new names.

Our idea was to look at this word, this concept, of development. We wanted to consider what the term “development” means to different people, and how we can move away from seeing development through just the Western lens. So I looked at it from different vantage points, including modernization, sovereignty, dignity, and gender. It was most basically a process of reading and learning everything I could get my hands on, and eventually selecting pieces that I thought really challenged our mainstream construction of development to include in my final project.

How has this DISP project, and your work with DAB, shaped your approach to selecting classes each semester?

Now, the courses that I take are pretty much exclusively what I consider to be critical courses — where the scholarship and scholars that I'm reading are in alignment with epistemic diversity. I really value that, and I think over the years I have gotten better at picking through syllabi and noting which voices are present, and which aren’t.

Are you thinking about any future projects that build off of this work?

I am trying to keep this work in mind as I workshop my thesis topic for next year. I am hoping to look at the concept of brahmanical patriarchy in the South Asian diaspora in the United States. I want to interrogate its erasure from scholarship and academia in the United States, and I’m not sure I would have been able to think critically about this topic without my previous work looking at erasure.