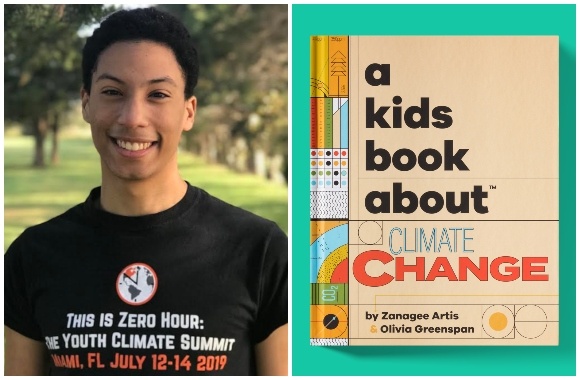 On Wednesday, February 9, Zanagee Artis and Jeff Colgan attended a 3rd grade classroom at the Croft School in Providence, Rhode Island, to discuss Zanagee's book, A Kids Book About Climate Change, and the effects of climate change on their community. 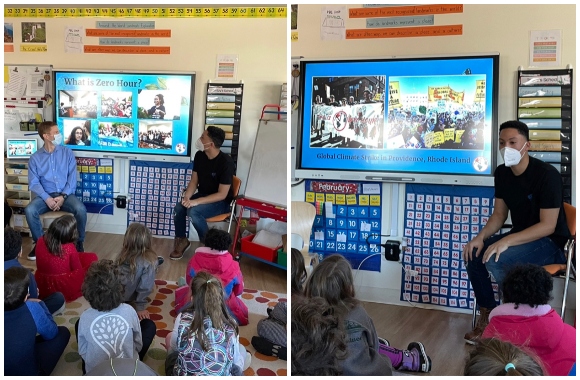 President of the Black Pre-Law Association and Chair of Greek Council, Zanagee Artis co-founded – as a high school student – Zero Hour, a climate justice organization, which has gone global. Zanagee also co-authored the recently published, A Kids Book About Climate Change, and attended the COP26 in Glasgow, Scotland.

During high school, you became a committed activist focusing on environmental justice and addressing the climate crisis. Tell us more about your development as a climate justice activist?

Before Zero Hour, which engages high school and college students and, now, young adults who’ve graduated from college, there weren’t many opportunities for young people to get involved in the climate movement, even though we knew they cared about the issues. Zero Hour gives people the resources, knowledge and access to do so.

How does your work as Zero Hour’s policy director and co-executive director influence and inform your academic studies at Brown and vice versa?

Zero Hour is my biggest time commitment outside of classwork. My environmental studies and political science courses have helped inform my work with Zero Hour , and vice versa. This past fall, I attended the 2021 United Nations Climate Change Conference (COP26) in Glasgow, Scotland. I met with U.S. State Department officials and other government representatives and observed the negotiations. Some of the topics being addressed in Glasgow were those being studied in my classes. It was exciting to see the application of academic knowledge in real time with allies in the climate movement and the governments who were parties to the negotiations.

Several classes have been especially meaningful, including Professor Amanda Lynch’s Making Connections: The Environmental Policy Process; Professor J. Timmons Roberts’ Equity and the Environment, Movements, Scholarship, Solutions; and Professor Jeff Colgan’s Geopolitics of Oil and Energy. Before I took that class, I had never understood the oil market and how the fossil fuel industry functions globally.

Did your interest in environmental justice and climate change policy advocacy drive your decision to come to Brown?

I knew that I wanted to study the intersection of politics and the environment, and Brown was a place where I could do that right away. I fell in love with the first class I took at Brown – Humans, Nature and the Environment: Addressing Environmental Change in the 21st Century, with Dawn King, senior lecturer, Environment and Society.

I’ve been a teaching assistant for that class since my sophomore year. It didn’t make sense for me to take college course requirements that didn’t relate to my passion and, at Brown, I’ve been able to [fulfill that passion] in every way and during every semester.

In addition to all your other commitments, you’ve also co-authored a recently released children’s book, A Kids Book About Climate Change. Tell us what motivated you to write that book?

After the New York Times wrote an article about the Youth Climate March, another environmental activist, Olivia Greenspan, reached out to me on Instagram. Both of us felt that as children we didn’t have any resources tailored for us to understand climate change and its implications. Although the world has known for decades that the climate crisis is here, there hasn’t been a resource that simply identifies what climate crisis is, who is most impacted by it, what climate justice would look like and what solutions to this crisis are. This book, targeted for children ages 5-9, offers a space for hope and sharing solutions.

Olivia and I wrote the book with many audiences in mind – not only children, but also the adults who will read the book with them. The book recommends additional resources that are too complex to include in a children’s book.

My work with Zero Hour has informed my own knowledge about climate justice that I include in the book, which talks about people who are most vulnerable to climate change, and why. Through organizing with Zero Hour, I’ve met people who shared stories about how climate injustice affected their communities; that was helpful to my writing of A Kids Book About Climate Change. A portion of every book sale will go to Ecodrive, which plants mangrove trees in Madagascar.

What else do you have on your agenda before graduation? And, after graduation?

In March 2022, I’ll spend 12 days in Antarctica where I’ll learn more about climate science and climate leadership. I’m attending the program as an ambassador with the Global Choices Arctic Angels Network.

Olivia and I are in the midst of the first season of 1 Point Five: A Kids Podcast About Climate Justice, which builds on the book’s topics. The podcast, which goes into more detail, is for an older audience, 10-15-year-olds.

A Kids Book About Climate Change and the podcast are available through the publisher, https://akidsco.com.