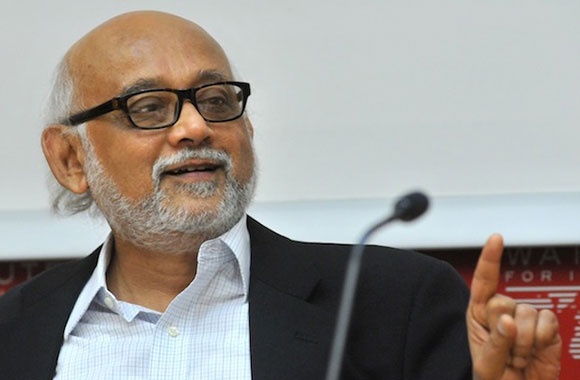 A Conversation With Partha Chatterjee

Partha Chatterjee led the opening session of the Brown-India Seminar on September 21, 2012, giving a paper titled "Soccer and Collective Identity in Colonial Calcutta." The following has been condensed from a conversation at the Watson Institute that morning.

It's been 20 years since The Nation and Its Fragments was published, changing the way we understand nationalism in its different dimensions. In its preface, you write that it is in the nature of nationalism that any interrogation of a specific history can be brought to bear on another. So, first, I'd like to ask if we can apply the ideas you have elaborated about nationalism and its construction in your study of South Asia to questions of nation, society and identity here, in the country where you work and teach part of each year.

Yes and no. There are some interesting and crucial differences between nationalism in the United States – which of course was also an anti-colonial nationalism – and nationalisms in the more recent period in ex-colonies in Asia and Africa. One of the crucial differences is that, because the American colonies were essentially white-settler colonies the formation of law, property, and administration in the colonial period was entirely based on European principles of the time. Native Americans were never a presence in the domain of law or administrative structures. Everywhere else in Asia and Africa the local forms of law, of property, and of customs, as well as significant sections of local elites, had to be accommodated within the colonial structures.

As a result, the forms of government that emerged in the colonial period, and later on, the kinds of government or forms of states that the nationalist leaders imagined for themselves, were necessarily very different from the kind of nations that the various American republics became.

In other nationalisms, it's not simply a struggle against the colonial rulers, but there's also an enormous struggle inside those societies trying to define for themselves a kind of modernity which would not simply be copying Europe. I believe that continues to this day. A lot of the things that one sees in terms of trying to define and project a certain national identity today in large parts of Asia or the Middle East or Africa is a continuation of that struggle.

Is there anything notable about the presentation of nationalism in the United States today?

There are several things that I think are very prominent.

First, the constant evocation of something called the 'American People.' Everything is, as it were, ratified by some appeal to something called the American People. Now, that of course is very foundational to the idea of nation – a nation as a people. But in the election campaign, for instance, clearly different parties and their leaders are making appeals to particular sections, and yet they never say 'I am appealing to a section.' It's always the people.

There's also the very interesting question of how this nation relates to other nations, to the rest of the world. There's a long American tradition of what used to be called isolationism: that even though so much is shared with Europe, there was a sense in which the United States ought to preserve a certain distance from the old world, which was seen as a world of war and religious conflict. People who migrated from Europe and came here were happy to leave all that behind.

There is some residue of this in the conception of American nationalism. But one of the things that's happened to the United States, especially since the Second World War, is the sense that the US has to take very prominent leadership over the rest of the world. And that continues to be this enormous tension. What does that presence mean? You see this constant tousle, that on the one hand, unless you move in with force, somehow that position of leadership is threatened. But as soon as you do that, there is a reaction of 'Why should we be embroiled? Why should our boys be put in harm's way?' That again is precisely part of this deep ambiguity about the place of the United States in relation to the rest of the world. On the one hand, there is the sense that the true place of the United States is away from all that. And yet you can't stay away.

What about history, and myth? Your theory of the creation of a nation is very much about how we remember our genesis.

One thing, for instance, I always find quite puzzling: the virtually unaltered framework of the US constitution, unchanged for more than two hundred years.

There's obviously the glorification and enormous memorialization of the War of Independence. Part of that lies very deep, it seems to me, and in some ways quite strangely. It lives not just as myth – in the sense of certain fictional memories that one holds dear – but in real fact. One thing, for instance, I always find quite puzzling: the virtually unaltered framework of the US constitution, unchanged for more than two hundred years. There is a very strong body of opinion that says that's how it ought to be: we shouldn't be changing this. And so you actually see a lot of completely seriously held views about what the state should be like which seem to belong to the 18th Century. People from other parts of the world are completely puzzled by this. But I think that is part of the mythical origins of the US as a nation.

There are other things that I can't say I completely understand. For instance, unlike many other states the US actually had to go through a period of serious civil war. The place of the Civil War in American history and how it's remembered – at one level one would think that's an episode that, in terms of the official nationalism, people would simply want to forget. But it's not been forgotten, and there are very interesting ways in which that memory has been incorporated into the history of the nation not just as something that happened, but as something that somehow rejuvenated the nation.

Do you see any relationship with that history of the Civil War and the experience of Partition in Bengal and the Punjab?

Yes. But you see, the distinction is that in the American case the Civil War is now 150 years old. The Partition and the creation of the nation-states of Pakistan, and later Bangladesh, is much more recent. And so yes, to a certain extent one would think that there is an effort in all three of these states [Pakistan, India, and Bangladesh] to integrate the history of Partition into the larger narrative of the nation, as it seems the US has done with the history of the Civil War. And in these three cases I think they're done quite differently. In the Indian case Partition is still spoken of in terms of a kind of great tragedy, something that should not have happened. In Pakistan that's not the case. Partition was the moment of birth for Pakistan. In the case of Bangladesh it's an even more interesting thing, because it's a staggered birth-event: '47 was the first step, and then it had to happen again in '71.

You are famous for your love of Calcutta, where you live most of the time. What do you miss most about Calcutta when you're in New York?

It's hard to say. In fact, that's probably why I prefer to live in New York, rather than anywhere else, if I have to be away from Calcutta – there are lots of things that are not all that different. Just walking the streets of New York, which I do quite often, is like walking the streets in Calcutta, precisely because of the presence of a certain kind of very vibrant street life which is not there in most American cities. But what I miss most of all is the language. That's one of the things about living in a city, is just listening to other people talk. You don't necessarily have to participate: simply listening to other people talking you get a sense both of the use of language, how language is used by different kinds of people in different sorts of contexts, and how language is almost palpably changing. You suddenly hear words and expressions you never heard before and you wonder what that means. It's the Bengali language I miss most.

And is there anything you miss about New York when you're home in Calcutta?

Yes. Once again, walking the streets. Walking the streets in Calcutta is physically a more demanding thing than in New York. Very often, when I'm walking in Calcutta and constantly bumping into other people, and the pavements are dug up, I do miss walking down Broadway, which is quite pleasant.