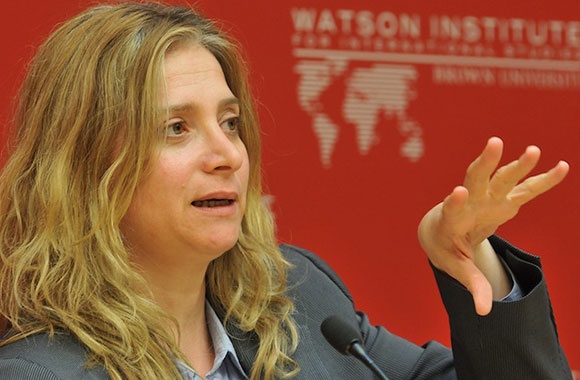 “I have hope that this generation will grow up with the chance to build a democratic Syria.”

Samar Yazbek: Questions for a Writer of the Syrian Revolution

Syrian journalist and author Samar Yazbek has been an influential figure in the uprising against President Bashar al-Assad and his regime, advocating for universal human rights and lending voice to the Syrian people. As an Alawite – the minority sect of Shiite Islam of which President Assad is also a member – her opposition to the regime is especially controversial. After participating in the 2011 anti-regime demonstrations and publishing work highlighting the atrocities of the regime, Yazbek was detained and tortured by Assad's security forces. She was finally forced to flee Syria, and now only enters the country in secret to continue her coverage of the revolution.

On September 20, 2012, Yazbek visited Brown University. In addition to giving a lecture at the Watson Institute, she sat down with Annika Lichtenbaum '14 to discuss her experiences since the start of the revolution. The interview was conducted mainly in Arabic, with translation assistance from Brown Lecturer in Arabic Miled Faiza.

What was your original purpose in speaking out against the regime?

I may have written about the regime's injustices, but I only wrote the truth. I wasn't conscious of being for or against anyone. But because it was the truth, what I wrote was unfavorable to the regime. I knew the reaction of the regime would be violent, but the reality of the violence exceeded my expectations.

What are you trying to accomplish through the work you have published since leaving Syria?

The situation in Syria is very complex: misconceptions about what is happening there are rampant. In addition, the regime is publishing propaganda in an attempt to distort the facts of the revolution. For example, they claim that it is a sectarian conflict and that there are Salafists and jihadists within the opposition. I am trying to write about what is happening on the ground in order to convey a truthful image to the world.

Do you think your ability to effect political change is altered in any way because you are an Alawite woman?

My being a woman is a negative, because we still live in patriarchal societies that do not view women positively. I don't consider myself Alawite – I am Syrian, despite the fact that I belong by birth to the Alawite sect. Nonetheless, my voice as an Alawite woman is very useful to the revolution, because it disrupts the official narrative of the regime, which claims the revolution is entirely Sunni. As such, it is very important for me, and for people like me, to write about and stand on the side of the revolution.

Since the beginning of the revolution, there has been a lot of media attention on the children taking part in the anti-regime protests. You yourself have a young daughter whom you have taken with you into hiding. How do you think growing up during the revolution will affect this generation of Syrians?

I believe the revolution will inspire this next generation, that it will serve as a light for them to follow. On the other hand, I fear for these young people. I worry that the extreme violence and continued massacres carried out by the regime will have an effect on them – violence has a tendency to beget a culture of its own, and to generate psychological problems. Overall, however, I have hope that this generation will grow up with the chance to build a democratic Syria.

In an interview with Beirut39, you said that you think discussing taboos like politics, sex and religion in the Arab world will "pave the road to eliminating those problems that have obstructed its development." In light of the recent outcry over the trailer of the anti-Muslim film produced in America, do you still believe this is true?

This is a very important question. I think that we are in a difficult period now in the Arab world, during which it may be impossible to discuss these particular subjects. The tide of Islamism in the region will have a significant impact on the freedoms of women, especially regarding sex. But I believe that we are at the beginning of the road to democracy.

We have had despotic systems ruling Arab countries for half a century. These regimes have left behind unsolved problems, among them religious fanaticism. The first step to solving these problems early on is the fall of the tyrannical regimes themselves. When the despotic regimes fall, there will be free speech in politics and society.

And even if Islamists come to power and try to eliminate these freedoms, particularly the freedoms of women, our battle with them will be a democratic battle. But the first step to establishing this democracy is the fall of the regimes. Many issues will have to be deferred until later because the region will experience many years of chaos. I believe that this will be a difficult stage, but it is a natural part of revolution. Major historical changes are accompanied by devastation and chaos, murder and blood. But all revolutions pay exorbitant prices to attain their goals.

What effect, if any, do you believe the recent anti-American protests will have on the Syrian revolutionary effort?

I think the killing of the American ambassador in Libya and the current demonstrations against America are something the previous, collapsed regimes wanted to happen, of course. The mood of the masses is currently at a fever pitch, because of this fanatic Islamist fervor drawing attention to what is actually happening on the ground. So, in my opinion, the major problem does not only concern America, but concerns the religious militancy of the Arab world.

In Syria, there have been no actions committed against America; no flags were burned, and no one started any demonstrations. The rebels watched the violent reactions that occurred in other cities, but Syria is not a country of religious Islamic fanaticism. The Free Syrian Army has demanded the expulsion of the Islamists that have entered the country because we do not want them among us. Syria is a varied and open country, but today it is in danger of becoming radicalized by such hard-line Salafist movements.