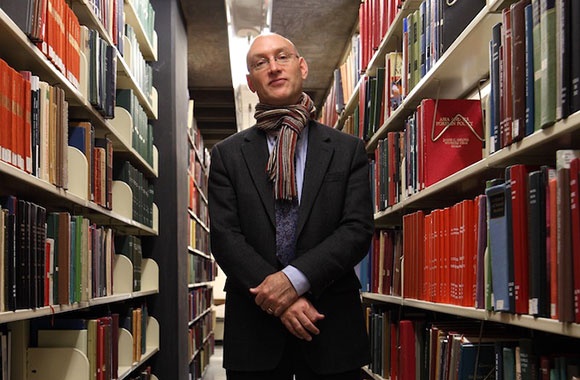 Keith Brown is Professor of International Studies at the Institute, and Director of BIARI. Photo Karen Philippi

Wading in the Wine-Dark Sea

There was a time when Keith Brown planned to focus his graduate studies on the problem of color terminology in Homer. That is, in Homer's Greece, the sea was red, like wine. Or else the wine – diluted, some say, with alkaline groundwater – was blue, like the sea. Or else the absence of a word for "blue" in ancient Greek meant the color itself couldn't be perceived. Or maybe the distinctions between colors in Homer's time had more to do with depth, opacity, or synesthetic associations with the temperaments (red = angry). Or perhaps, the "wine-dark sea" was simply a poetic flourish, a rhythmic phrase to finish out a line of Homeric hexameter, a challenge posed to sense and to the senses, alluring and unsettling in equal measure.

And while the question of color in the Iliad may seem a far cry from his present work as an anthropologist at Brown University's Watson Institute – investigating the interplay of identity, culture, and politics in the Balkans, particularly 20th century Macedonia – I can't help fixating on the wine-darkness of Homer's sea throughout our conversations. Because really the challenge posed by Homer's colors – his red oceans, his golden skies, his violet sheep and pale-green faces – is a problem of translation. How do we make sense of symbols and meanings across space and time, between peoples whose disparate ideologies and experiences constantly jeopardize the possibility of understanding? And this, in a sense, is the challenge of anthropology. ... Read the complete profile.