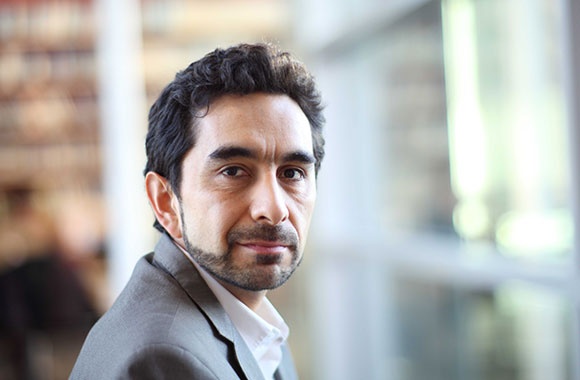 “Usually, what public intellectuals do is to live double lives. And I’ve come to the conclusion that this is unfeasible.”

On Being Both Academic and Activist

The half-hour film Sumak Kawsay: the Sarayaku Case opens with César Rodríguez Garavito boarding a single engine plane in Puyo, Ecuador. Rodríguez is slight, his polo shirt untucked. He carries a backpack over one shoulder. After flying over the Amazon jungle, the plane lands on a grass strip in the remote Sarayaku territory in Ecuador's southeast, where he greets a group of men in a clearing. The film cuts forward. Sitting on a stump under a canopy of woven grass, Rodríguez speaks into the camera.

"I'm here following a lead that started with a project in northern Colombia," he says, "where a dam was built 20 years ago which led to a case that is still before the Inter-American Commission on Human Rights." The jungle is lush behind him; a child fidgets in a large wooden chair. "I heard of a case that is much further along, the Sarayaku case.… If the Court rules in favor of the community the case could create a fundamental precedent for indigenous rights in Latin America."

Rodríguez is a lawyer with a PhD in sociology and a professor of law at the University of the Andes in Bogota. But his professional niche is not easily defined. He is also an activist with journalistic intentions, a vocal advocate for indigenous rights, and an accomplished sociologist. He has written or edited 15 books, authors a weekly column in the Bogota daily El Espectador, and is a founding member of Dejusticia, the Center for Law, Justice, and Society. Bogota-based Dejusticia advocates for human rights and social justice through what the organization terms "action research." It is a method that, like Rodríguez himself, bridges the sharply defined institutions of the public sphere, integrating academic research, legal intervention, and public debate. ... Read the complete profile.