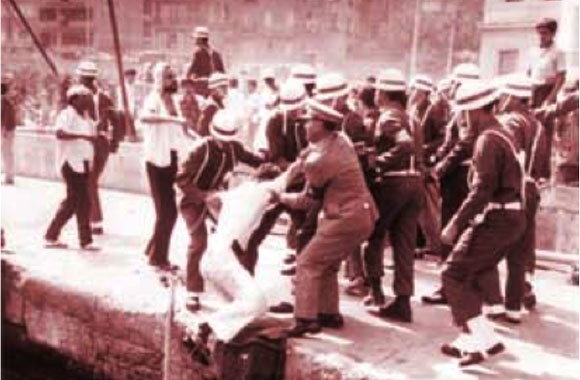 "I wanted people to realize that no other country in the world has stationed its troops on the soil of sovereign countries all over the world on a permanent basis."

Exploring the Effects of U.S. Military Presence in Germany and Turkey

When sociologist Amy Austin Holmes was at the Free University of Berlin, getting a master’s degree in political science, the reminders of America’s occupation were everywhere. In West Berlin alone there was the John F. Kennedy School, and Checkpoint Charlie, and vintage signs that still ominously announced “YOU ARE LEAVING THE AMERICAN SECTOR.”

Right on campus, an old Army barracks had been converted into a dormitory. Her mind turned. Why did so much attention get paid to American military policy, but not the military’s physical presence on foreign soil? Where are U.S. troops stationed, and what impact do these soldiers have on the countries they’re meant to protect?

These questions led to her doctoral dissertation and, now, a book and a film produced by this Watson postdoctoral fellow.

Social Unrest and American Military Bases in Turkey and Germany since 1945 will be released this month from Cambridge University Press. Occupy Turkey: Resistance in Baseworld, a 67-minute documentary and a companion to the book, previewed at Watson in April, and will be screened throughout the Middle East this fall.

The facts laid bare in book and film are arresting. The U.S. military operates an estimated 1,000 installations around the world – a veritable empire of bases. Even the Pentagon refers to itself as “one of the world’s largest landlords.”

A 2012 report by the Department of Defense cites a “global real property portfolio” of more than 555,000 structures in 40 countries that cover, in total, 28 million acres.

“With the book and the film, I wanted people to realize that no other country in the world has stationed its troops on the soil of sovereign countries all over the world on a permanent basis,” Holmes said. “People should ask if this is in our interest as Americans, and take into account the wishes and needs of the people of these foreign countries. And for our military, deployments often separate them from their families for long periods of time. Is this a good idea?”

A student of social movements, Holmes was interested in the political ramifications of U.S. military bases. She focused her attention on two of America’s NATO allies – Germany, a developed country, and Turkey, a developing country.

Both host a heavy U.S. military presence. During the Cold War, Germany had more than 250,000 troops, mostly in the Army and Air Force. Today, Germany still hosts tens of thousands of troops – making it home to more U.S. military personnel than any other foreign country. Turkey had about 30,000 troops in an estimated 30 installations throughout the Cold War and – as it borders Iraq, Iran, and Syria – the U.S. still maintains active Army, Navy, and Air Force installations that hold jets, tanks, submarines – and anywhere from 60 to 90 tactical nuclear missiles at Incirlik Air Base.

Not surprisingly, Holmes found that after World War II ended, Germans and Turks resisted U.S. weapons and troops. What was surprising: opposition in these starkly different countries was expressed in remarkably similar ways.

In both Germany and Turkey, U.S. military presence has been the subject of acts of nonviolent civil disobedience, base worker labor strikes, violent attacks and kidnappings, and opposition party protest in both parliaments. Holmes found that a powerful sense of disenfranchisement and political vulnerability and was at the root of the protests.

“There is a paradox at play,” she said. “American troops are there to provide stability and security to our allies. But having a base in your country also means that you are open to attack by American enemies. These bases can create the threat of violence for the very people they’re meant to protect.”

An undergraduate film major, Holmes made the documentary to widen the audience for her work and to bring her research to life. With a small grant, she wrote, produced, and narrated the film, which includes interviews with several prominent Turkish activists.

“When you see faces, and hear stories, the information is richer – more potent somehow. The film started as a side project,” she laughed, “and then it took over my life.”

Holmes leaves Watson in June to return to Egypt, where she is an assistant professor of sociology at the American University in Cairo. At Watson, she spent much of her time writing her next book. Scheduled for publication in fall 2015, it will focus on the Egyptian revolution and the Arab Spring – another social movement she was literally swept up in. She watched security forces storm Tahrir Square and saw protesters shot just yards away. At one point, she clung to a lamppost while getting grilled by police. She escaped, and watched the “Friday of Anger” protests unfold before her eyes.

“People think revolutions and military coups are things of the past,” she said. “But in Egypt, and elsewhere, we’re seeing that’s not the case.”