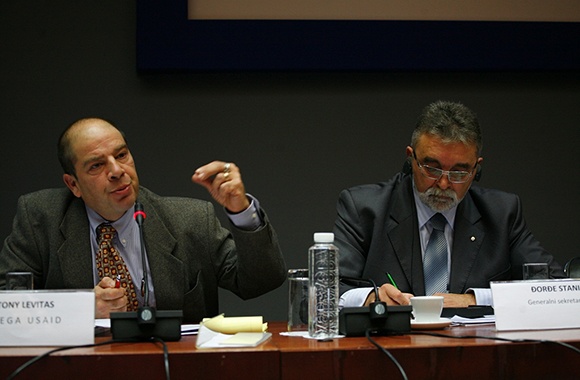 "Working with countries that are trying to reform themselves teaches you quickly that ideas matter, and that how problems get framed and discussed has a bigger impact on outcomes than people typically think."

Levitas (at left), adviser to the Standing Conference of Serbian Towns and Municipalities, at the Intergovernmental Finance Conference, Belgrade, Serbia 2009

Understanding the Flow of Public Money in Developing Countries

Watson: You're teaching a new course for this semester called "Political Economy of Public Finance Reform in the Developing World." What's the course about, and who is it for?

Anthony Levitas: The course is about the fiscal plumbing of government and governance in developing countries. It looks at how states take in money, and how they spend it – where, on what, and through whom.

It is designed for graduate students and advanced undergrads who are interested in understanding how public sector financial flows express political priorities, shape public services and distribute power across multiple levels of governance in the developing world.

W: How did you become interested in taxation and state building? What drew you to Eastern Europe?

AL: The interest in the region I probably owe to family roots and herring.

In the 1980s, I was working on a dissertation about the relationship between economists and the communist state when the Berlin Wall came down. I got sucked into the Polish revolution and found myself standing at the intersection between local government reform and education reform. Many of the most pressing and hardest problems were "fiscal," so this is what I ended-up working on – though when I started, I was probably more a historian of political economy than anything else.

W: You have real-world experience advising politicians on government reforms. What satisfactions and frustrations have come out of that? How does this inform how you teach?

AL: Working with countries that are trying to reform themselves teaches you quickly that ideas matter, and that how problems get framed and discussed has a bigger impact on outcomes than people typically think. It's a good thing to help better ideas displace bad ones, and hugely satisfying when the better ones actually bear fruit.

Hopefully, my teaching increases peoples' awareness of both the indeterminacy of the way we govern ourselves and the agency of our ideas in shaping the process.