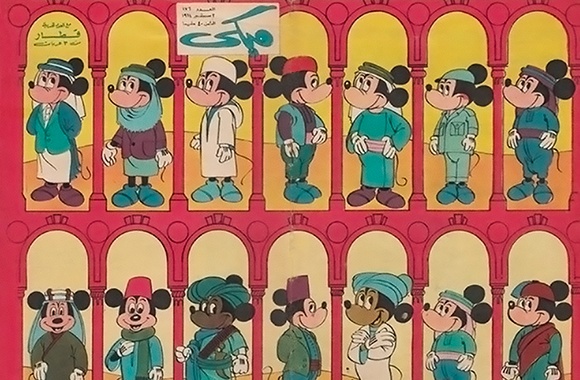 “The title is a kind of a provocation, intended to raise broader questions about identity, geography, and context.”

Beyond Mickey and Maus

From Harvey Pekar to Hergé, from Goscinny to R. Crumb, the art of comics in the West has its pantheon. But a new exhibition, Arab Comics: 90 Years of Popular Visual Culture, brings to light the longstanding popularity and changing face of this medium from the Maghreb to the Arabian Peninsula.

The show, a collaboration between Art at Watson and Middle East Studies, consists of thirty four covers and panels, starting with the 1923 Egyptian Al Awlad and continuing on with original characters and adapted comics from Western Europe and the United States that were introduced into Arabic-language markets in the 1940s, including cross-over characters such as Nabil Fawzi, the Lebanese Clark Kent, and Hammam, an “Arabized” Tintin. It also features recent works from Samandal, the contemporary comics magazine based in Beirut, which has become a locus for today’s generation of comics in the region.

Mona Damluji, a Mellon Postdoctoral Fellow in visual culture at Wheaton College, curated the show with her brother, Nadim Damluji. Supported by the Thomas J. Watson Foundation, Nadim spent part of 2010 and 2011 researching postcolonial comic book cultures in the Middle East and Asia. Mona, who studies the “rich visual imaginaries” of the Middle East as expressed in film, photography, and architecture, was drawn to the “innovative and interdisciplinary” character of Middle East Studies’ programming at Brown. She approached Beshara Doumani, its director, with the idea for the exhibition. Doumani was enthusiastic from the start.

“Mona’s proposal fit perfectly with ‘Art and Social Change,’ one of the four themes that govern research and programming activities of the Middle East Studies Program,” says Doumani. “We are thankful for the opportunity to work with her and Nadim.  They put together an exciting workshop, as well as an eye-opening installation that is sure to be appreciated by a wide range of audiences.”

Damluji emphasizes that there is no way to generalize “Arab comics:” they are as diverse as the individual artists and countries that produce them. “The title is a kind of a provocation, intended to raise broader questions about identity, geography, and context,” she says.

The exhibition shows the different dimensions of how Arab identity has been defined and, Damluji says, explores “what is particularly Arab – or not – about these comics. How is an Arab identity promoted or challenged by these works?”

A half-day symposium on February 26 will take up some of these questions. Focusing on the histories and the contemporary articulations of comics in the Middle East, the symposium will bring together scholars and artists from the US and Lebanon to discuss such themes as orientalism, propaganda, and illustration practices.