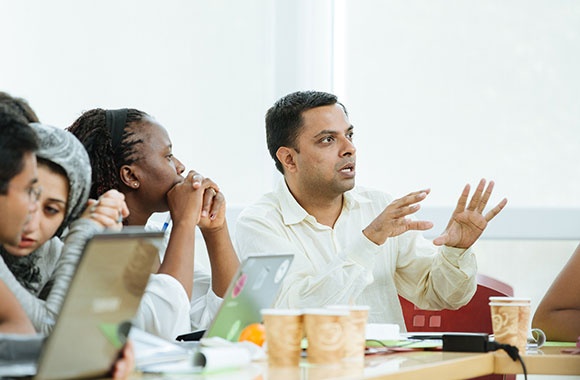 “Coming here, someone who works on Latin America comes to listen to stuff that’s on South Africa, or they’re listening to stuff on Eastern Europe – that’s pushing them in a new direction. That’s really good. It’s amazing what you can learn from just getting off your own path.”

Sharing Local Knowledge to Inform Policies across the Globe

When dozens of scholars from around the world gather to discuss cutting-edge research in international studies, the result, according to one professor at the Watson Institute, can be “raucous.” That was the word Patrick Heller, professor of sociology and international studies at Brown, used when addressing the institute on Ethnicity, Conflict and Inequality in Global Perspective (ECIGP), one of four institutes convened this past June at Brown as part of the Brown International Advanced Research Institutes (BIARI).

Heller’s office is just down the hall from where the ECIGP institute met, and from there he could hear the clamorous debate and discussion for the duration of the intensive two-week-long conference. Created six years ago, and made possible by ongoing generous support from Santander Universities, BIARI brings early-career scholars from Africa, Asia, Latin America, the Middle East, and Eastern Europe to Watson every June for interdisciplinary lectures, seminars, and workshops led by distinguished international guest faculty. Residing at Brown, the scholars have a chance to connect and to explore the possibilities for future collaborations.

The ECIGP institute was convened by Glenn Loury, Merton P. Stoltz Professor of the Social Sciences and a Watson faculty fellow, and Ashutosh Varshney, Sol Goldman Professor of International Studies and the Social Sciences at Watson and director of the Brown-India Initiative. The institute began with Loury’s presentation on ethnicity and inequality within the United States. He set the tone for the institute by encouraging participants to draw wider implications from the localized case studies presented at the sessions. “The themes that I will be illuminating are relevant beyond the US – some of the conceptual insights are broadly applicable,” he said.

This broad applicability suited the scholars in attendance, whose widely different geographic bases and research approaches meant that everything from theory to data collection was up for debate. There was, however, no debate about the benefits of productive cross-cultural dialogue among these diverse scholars.

For some, the interdisciplinary perspective was the main reason for applying. Paul O’Connor, an anthropologist at the Chinese University of Hong Kong, studies conflict between those living in Hong Kong and in mainland China. Because of Hong Kong’s small size, he explains, “you have to be open to the rest of the world anyway.” O’Connor welcomed fresh perspectives. No one else specialized in Hong Kong at the institute, but he “wanted to come here, listen to some other examples, look at research from different places, and see what I could take from that to apply to my Hong Kong research.”

O’Connor says the competing approaches and opinions at BIARI presents scholars with opportunities to reconsider their own research. “Coming here, someone who works on Latin America comes to listen to stuff that’s on South Africa, or they’re listening to stuff on Eastern Europe – that’s pushing them in a new direction. That’s really good. It’s amazing what you can learn from just getting off your own path.”

Attending BIARI had a different appeal for others. Nidhi Sabharwal, for example, works at the National University for Educational Planning and Administration in New Delhi and hasn’t had the chance to study outside of India. Not only was she the first woman in her family to pursue higher education, but BIARI also marked her first time traveling abroad to enhance her academic work.

Sabharwal studies how the Indian caste system affects human development. While this research is very localized, she argues that issues of inequality are of global importance. Listening to colleagues from around the world, “we find that there are so many similar issues that connect to each other” with regard to inequality. “While we have our local knowledge,” she asks, “how do we apply it at the global level in order to inform policies?”

This question was particularly germane to ECIGP presenter Patrick Barron, whose work examines post-conflict violence in Indonesia. Rather than a traditional academic in a university setting, Barron is regional director of conflict and development at The Asia Foundation, a nonprofit international development organization. His research seeks to understand why violence continues after peace settlements. While he works toward building an intellectual understanding of the nature of conflict, he also contends his work is “meant to be applied,” and devises policies that governments can act on.

When BIARI participants leave Brown they will join a growing alumni community that now boasts over 850 members from 100 countries. Alumni can even receive seed funding for longer-term research, teaching, and other collaborations, ensuring that this applicable and interdisciplinary research goes on long after BIARI wraps up each June.