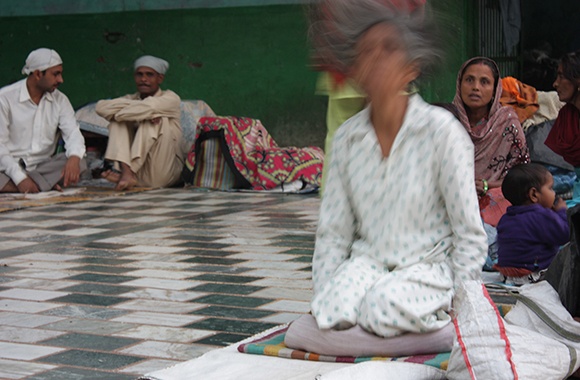 "...we are offering a lens through which we might understand even the Western terms differently, such as depression or addiction, as forms of what I have called waxing and waning life.”

“Mental Health” by Any Other Name

An anthropologist and a filmmaker team up to rethink Western approaches to healing.

“Stunning:” that is how Bhrigupati Singh, assistant professor of anthropology at Brown and a faculty fellow at the Watson Institute, describes the level of consumption of psychopharmaceutical drugs for mental health issues in India, even among the poor. Funded by a seed grant from the Watson Institute and the Brown-India Initiative, Singh and several other researchers from a diverse range of disciplines will study new trends in mental health and the understanding of emotional wellbeing, along with religious and secular forms of healing for psychic tensions and mental disorders in urban north India. The tentative title for the collaboration is the Prana Project. Prana is the Sanskrit word for “life force,” which Singh says is a key concept in his study of mental health.

The Prana Project is an interdisciplinary and multimedia experiment in different ways of conducting and presenting research. A key collaborator with Singh is Iram Ghufran, a Delhi-based artist and award-winning documentary filmmaker. Singh and Ghufran were colleagues at Sarai-Centre for the Study of Developing Societies (CSDS), a leading social sciences and humanities research institute in Delhi. The Sarai Programme at CSDS synthesizes traditional academic research with artistic practices to study contemporary culture in India. The impetus for the Prana Project came when Singh and Ghufran connected on the theme of mental health and spiritual healing.

The organizing principle of the Prana Project, says Singh, is the notion of “life force as a way of rethinking mental health issues.” Life force is found in Chinese conceptions of qi, the Sanskrit term prana, and even Western philosophies of vitalism. Through the concept of life force, Singh says they will “rethink Western psychiatric categories and mental health in ways that are receptive to other knowledge traditions and embodied experience.”

Though “life force” can challenge certain Western forms of understanding mental health, Singh says that he and Ghufran “aren't necessarily antagonistic to the neuroscientists or psychiatrists, because they themselves are looking for terms and use terms that we are learning from.” Instead, he says, “we are offering a lens through which we might understand even the Western terms differently, such as depression or addiction, as forms of what I have called waxing and waning life.”

Ghufran concurs, explaining that at the most practical level, many Indians continue to use traditional practices alongside biomedicine. “Doctors and pills,” she explains, “exist alongside a variety of other practices such as shrines, healers, forms of prayer and meditation, yoga, reiki. Some forms are associated with the rich, others with the poor, and some are accessed across class.”

Their research is predominantly focused on sites within Delhi, including shrines, clinics and addiction centers. Singh seeks to “rethink the idea of quality of life and well being through the lens of life force.” Ghufran adds that she wants to reveal how people are “seduced by the promise of something, whether it is a drug or a state of being,” and how such phenomena “play out socially” rather than just medically.

Singh and Ghufran aren’t the only members of the Prana Project. They are joined by Catherine Kerr, a neuroscientist who studies Eastern spiritual and healing practices and is the director of Translational Neuroscience at Brown’s Contemplative Studies Initiative, and two psychiatrists at the All India Institute of Medical Sciences (AIIMS) in New Delhi, Drs. Pratap Sharan and Anju Dhawan.

Singh hopes to capitalize on the distinctness of each discipline in this collaboration. “For me the most interesting kind of interdisciplinary collaboration is when you don't collapse the difference between disciplines,” he says. Instead, through conversations and an overarching concept, each will allow the other’s work to influence his or her own, and “allow other disciplines and media to filter into [our] work.”

Though not a filmmaker himself, Singh has a background in the anthropology of media. His academic work, which has focused on religion and poverty in India, is strongly informed by media. He says he often considers “how one thinks with and through film, even if one is not a filmmaker.”

As a filmmaker who feels that filmmaking can’t be summarized by formal methods alone, Ghufran brings a different feel to the project, operating by inspiration and aesthetic vision. So far she has been talking to healers and psychiatrists, taking photographs of the spaces they work in, which she describes as “sites of unburdening.” She is excited to collaborate, because it “opens new worlds for me,” she says. “The world of anthropology is open for me; the world of science is open for me.”

Though still in the early stages of research, the Prana Project has ambitious long-term goals. They plan to produce artistic and academic works during the next few years, including conferences, academic papers, artworks, and films. They hope to promote research partnerships between US universities and institutions in India, including a research partnership between the Brown-India Initiative and AIIMS. Ultimately, as Singh emphasizes, they are dedicated to “creating conversations across countries and across different forms of knowledge, including non-western philosophical traditions as a living resource to understand the contemporary.”