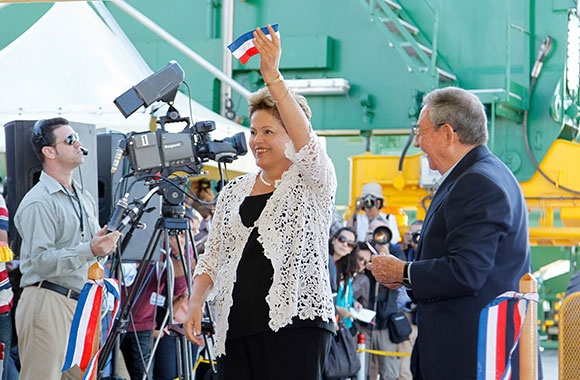 "Never before has a U.S. university conducted such a systemic public access project with the National Archives."

James Green, professor of history and brazilian studies and director of the Brazil Initiative

Brown’s New Initiative Will Consolidate Connections – and Create New Ones – Among Those Who Study “the country of the moment.”

Brazil is a nation of superlatives.

It has the greatest biodiversity of any country – home to about 4 million species of plants and animals and a third of the world’s rainforests. It is the largest exporter of coffee, sugar, beef, poultry, raw tobacco and fruit juice, and one of the largest sources of iron ore, petroleum, and biofuels. It is one of the fastest-growing global economies, with one of the largest markets for cars, cell phones, personal computers, and cosmetics. Households are getting richer and smaller. And it’s young. The average age in Brazil is estimated at 30.

It is also the fourth-largest democracy, the fifth-largest country, and the seventh-largest economy on the planet.

McKinsey & Company, consultants to the globe, calls Brazil “the country of the moment.” And it’s getting its own moment at the Watson Institute.

Last year, Watson launched the Brazil Initiative, a focused effort to make Brown the best place to study Brazil outside of that country. Director James Green, a Brown professor of history and Brazilian studies and a Watson faculty fellow, said this means that Brown faculty will lead the world in teaching and research on Brazil, and that Brown will attract the highest caliber undergraduate and graduate students to study Brazil on its campus.

“It’s not just excellence we’re after, but creativity and innovation,” Green said. “Doing things differently is a hallmark at Brown, and we want to harness that spirit of innovation and apply it to scholarship and research on Brazil. We want to create new connections between faculty, and between students, here on campus and in Brazil. We want to create new relationships, new projects, new fields of study.”

As a rising political and economic power, Green said, Brazil is a timely topic for Watson to tackle, with its emphasis on international security, development, and governance.

Brazil is also an opportunity for Brown to lead academically, Green said.

About 50 faculty members study Brazil – its medicine and music, its politics and history, its language and culture, its ecology and geology – or have active research collaborations with Brazilian colleagues. That’s more than any other Ivy League university, Green said, and more than most large public universities.

Deepening those research connections, and making new ones, is a major focus of the Brazil Initiative. Philanthropy is making it possible.

Thanks to an anonymous donor, the initiative has awarded a total of nine faculty research grants to Brown faculty and their Brazilian collaborators in science, technology, engineering, mathematics, medicine and public health. These grants are making possible the study of infectious diseases, the development of nanotechnology, and the restoration of rainforests. Another anonymous gift made possible 16 small grants to graduate students, postdoctoral fellows, and junior faculty, who will conduct research this summer in Brazil on topics ranging from sociology to biology.

To raise Brown’s teaching profile, in 2016 the initiative will host the international conference of the Brazilian Studies Association and publish an updated guidebook on Brazilian history and politics, which will reach students in 8,000 high schools across the country through the Choices Program. Both the conference and the teaching guide are timed to coincide with the 2016 Olympics in Rio de Janeiro.

In addition, Brown is one of five universities worldwide to host a CAPES Chair – a visiting Brazilian scholar who teaches and conducts research on campus for a semester. This fall, it was ecologist Luiz Antionio Martinelli. Next spring, it will be HIV/AIDS expert Maria Ines Costa Dourado.

As an example of the innovation the initiative aspires to, Green points to its Opening the Archives Project. Students from Brown and Brazil last summer scanned and indexed almost 10,000 U.S. State Department documents related to Brazil, and released them on an open-access website this spring. The documents – memos, briefings, letters – shed light on the relationship between the US and Brazil after a military coup and were viewed by 10,000 people in the first week alone.

Students will continue this State Department work this summer, then begin digitizing documents relating to Brazil at the John F Kennedy Library and the Lyndon B. Johnson Library in fall of 2014 and summer of 2015.

“Never before has a U.S. university conducted such a systemic public access project with the National Archives,” Green said. “It’s a huge service. If you’re interested in the recent history of Brazil, you don’t have to travel to access these documents. Everything is online.”

“Christina Paxson has a real vision for international relations, and an appreciation for Latin America and Brazil,” he said. “She brought Richard Locke in to lead Watson, and Sonia Feigenbaum to oversee global engagement. This leadership will ensure that we meet our goal for excellence and for innovation.”