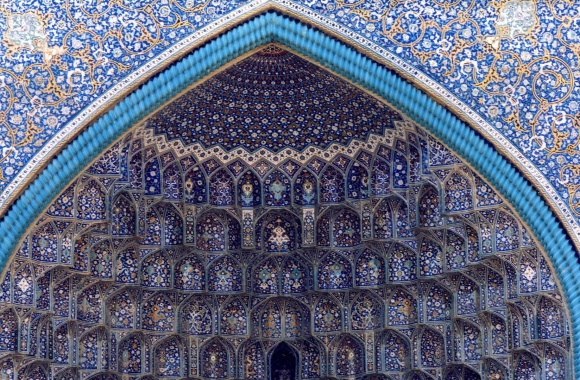 The blue tiles of Imam mosque in Isfahan, Iran.

“Iran is seen as aggressive, but the nation actually feels vulnerable. ... That vulnerability and their significant economic distress make them more open to negotiation.”

Beyond the Black Hat

Bringing Nuance to the Conversation with and about Iran

Jo-Anne Hart’s academic work is applied work. With Iran as her focus, it’s a challenge.

Iran has been cast in a clear role – unrepentant villain – in the American psyche for a generation. Long is the list of sins: terrorism, repression, fanaticism. Iran is a taker of hostages, a maker of bombs.

Yet Hart is a peacemaker. She has worked directly to reduce tensions and avoid war with Iran for more than a decade. This Watson Institute adjunct professor has taken part in back-channel negotiations with Iran, and gave a presentation at the Iranian foreign ministry on a framework for mutual threat reductions with the United States.

Hart’s work also puts her in direct and routine contact with the US military, consulting with and lecturing to dozens of junior and senior leaders.

While a full-time faculty member in Brown’s Department of Political Science, Hart also taught classes on Iran and Middle East politics at the Naval War College, in Newport, RI. She participates in Pentagon wargames and frequently briefs generals, admirals, and diplomats on conflict avoidance with Iran – and was once flown onto an aircraft carrier in the middle of the Atlantic to lead a crisis prevention seminar for Navy brass.

She has debated former United Nations ambassador John Bolton, and dined at the U.N. with Iranian President Mahmoud Ahmadinejad when he was in power. She just returned from Fort Leavenworth, where she lectured Army officers on Iranian political and security issues. She’s made this trip to Kansas half a dozen times.

Over the years, Hart’s message has not wavered.

Iran is repressive, she says, but is not a strategic threat to America or Israel. Regime change is not an option. Military action would be immoral – and a grave mistake. Hart argues an invasion is unsustainable, if not insurmountable, and even attempting one would make permanent enemies of the Iranian people. Given the existing enmity on both sides, even targeted air strikes or a single sunken vessel in the energy-centric Persian Gulf could inflict severe global economic pain, if not spark a firestorm of violence.

“I don’t have to fight the facts about Iran,” Hart says. “They’ve repressed their own people, killed Americans, are linked to terrorism. But if we insist on seeing Iran only as a giant threat, an immutable enemy, this view will lead us to war.”

“Iran is seen as aggressive, but the nation actually feels vulnerable,” Hart says. “They’re surrounded by countries that hold US forces, and Iran has a relevant history of invasion and outside intervention. That vulnerability and their significant economic distress make them more open to negotiation.”

Hart believes the interim agreement that the US and its major allies signed with Iran in November 2013 has very high stakes riding on it. To promote peace, she believes the US should take a no-nukes, no-regime-change stance with Iran. Long-term, she believes trade will create better relations by reducing ideological differences and promoting stability.

“The current negotiations,” she says, “must succeed.”

Hart’s quest for peace with Iran is rooted not only in her own liberal politics, but in her experience as a UCLA undergraduate. A roommate was a typist for a Persian poet and Rumi scholar, and Hart would skim over her manuscripts. She fell in love with the poems and the Persian language, and later, after graduate school and extensive travel, the culture that created ancient Persepolis and the architectural glories at Isfahan.

“I’m not an apologist for Iran, but I don’t demonize it,” she says.

This position has caused her trouble. Although Hart will not help the military fight wars, and she has turned down invitations to Iraq and Afghanistan, she is shunned by some academics on the left. She is also misunderstood by many in the military on the right. She takes solace in her modest progress towards peace, keeping correspondence from military students and colleagues, including this from a senior Army officer:

“I know your article is circulating among some very senior leaders and scholars within the military and in academia…Think you would be surprised by how much influence your Iran article is having on moderating thought, or at least serving as an intellectual starting point and foil for questioning preconceptions.”