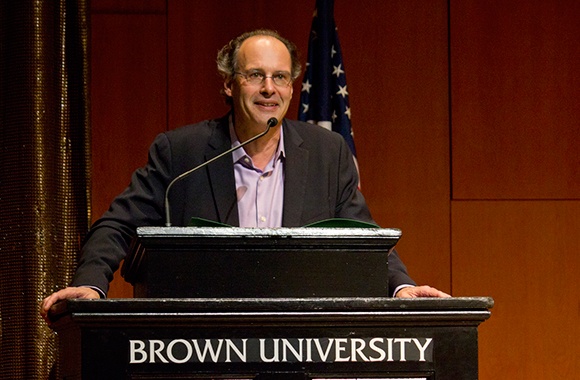 "What will be our special sauce? We’ll be genuinely international, incredibly interdisciplinary, take governance seriously, and train our students to be highly effective communicators."

Mandate: Five years from now, if you say “Brown public policy,” people will know what it is. Harvard, Princeton, Chicago, Michigan -- you know when you hear the name of the school, what kind of public policy they do. I want Brown to develop that kind of footprint. While the program has stature in Rhode Island, we don’t have enough visibility nationally and internationally.

What will be our special sauce? We’ll be genuinely international, incredibly interdisciplinary, take governance seriously, and train our students to be highly effective communicators. Combine all that with Brown University’s idealism gene, and we’ll have a dynamite program.

How you came to Brown: In 1982, I had just finished my PhD at the University of Chicago and was teaching there. My then-wife and I came to Rhode Island to visit her sister. On a beautiful summer day on a Newport beach, her sister said, “Brown has a political science department. Why don’t you get a job there?” I laughed. “Getting a job in academia these days is really hard. You don’t just pick the school!” A month later, the first job to show up on the market was the Brown job. It was the first tenure-track job I applied for. At lunch on the first day of my interview, the chair ordered two martinis and offered me the job.

Most impressive accomplishment: Being voted most inspiring teacher by the Brown student body -- the Hazeltine Citation -- five times.

Original hometown: Rio de Janeiro.  My father had returned from World War II to study business at Columbia. One day his professor said “Morone, come with me” and took him downtown to an international insurance company with some kind of problem in Brazil. His interview was he walked in the door and the guy behind the desk looked up and said he’s too young and he doesn’t know anything. The professor said, “Trust me.” The guy said “Fine.” And they gave him a ticket to sail to Brazil, where he met my mother who had grown up in Cracow and -- through an extraordinary set of circumstances -- survived the Holocaust. So an Italian Catholic from Staten Island met this beautiful Jewish survivor from Cracow. We moved to Staten Island when I was nine.

Current home: Lempster, New Hampshire, a rural town where the biggest attraction is a motocross course, and downtown Providence, with a view of WaterFire.

Policy person you’d most like to have lunch with: Lydia Maria Child. She was a great feminist and abolitionist in the 19th century. I’ve read a lot of her work and I’m secretly in love with her. Every time I read her, I think “Boy, she’s nailed it.”

When I’m not working I like to: Be in Paris. Or New York. Did I say Paris? I also like to run. Every summer I work myself up to a double-digit run, maybe eleven miles, running on country paths in the woods.

Best policy book you’ve ever read: Deborah Stone’s Policy Paradox. We were married when she wrote it in 1988 and it wows me to this day.

What you’re reading now: The Most Dangerous Book: The Battle for James Joyce’s Ulysses. A wonderful story of how censorship worked and why it collapsed. The Writing Life by Annie Dillard, which I’m rereading for the tenth time. Ira Katznelson’s magnficient Fear Itself, which I’m reviewing for a journal, and Beethoven: Anguish and Triumph, a wonderful new biography. As you can see I love to read lots of different stuff at the same time. But I may throw them all aside because I just picked up David Mitchell’s The Bone Clocks. He’s one of my favorite novelists.

-- Interview and photo by Ellen Dessloch