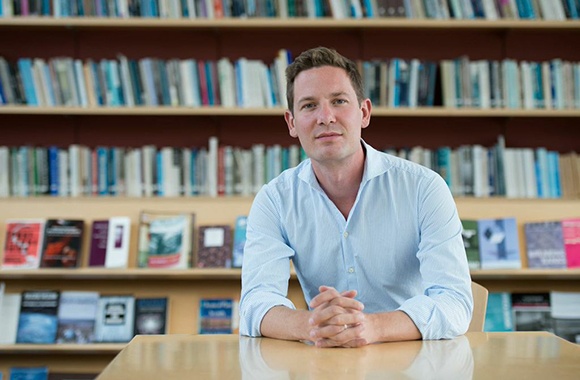 “The benefits are global, so let's try to figure out how everyone can have their share.”

It Pays to Collaborate

“Maybe I can start with a puzzle,” says Jonas Nahm, a postdoctoral fellow in international studies at the Watson Institute.

Nahm, a political scientist, traveled to China to study the political economy of the renewable energy sector there. The standard narrative of political economy, he explains, is that innovation happens in advanced economies, and then the production is outsourced to developing economies that cheaply copy and mass-produce the technology. But this wasn’t what he found when he spoke to Chinese firms making technology for solar and wind energy. They were innovating as well, and producing brand-new products themselves. This changed things. “It really became a project about how does innovation happen in these new high-tech industries,” Nahm says. It was a puzzle waiting to be solved.

In China, Nahm was also surprised to find a large number of German engineers working alongside these Chinese firms, often using technologies first developed in the United States. Rather than an isolated manufacturing industry, Nahm saw a global network developing around the renewable energy industry. “It became very clear that this phenomenon isn't just about China,” he says, but about renewable energy and high-tech industries around the world.

In the past, political economists predicted that the globalization of production would spread manufacturing across the world, from developed to developing economies. Nahm, however, found that innovation spread as well – which in turn has led to new opportunities for collaboration on a global scale.

“These firms can participate in innovation by collaborating with each other. It’s a global network of firms that all work together.” This has overturned long-held assumptions in political economy. “Economic development is no longer just about emulation,” Nahm says. “They’re not copying, they’re bringing distinct skills,” and now they are “collaborating more than competing.”

The new relationships forming within the renewable energy sector don’t just challenge traditional narratives about manufacturing. They also provide new avenues for combating climate change. In his study, Nahm saw “a lot of cross-border collaboration and exchange of information” in innovating green technologies. Like innovation itself, he points out, “carbon emissions are not stuck at borders.” Since the renewable energy sector is very interconnected, the solution to climate change has to be “established collaboratively” too.

Since innovation happens everywhere, Nahm says that there are compelling new arguments about addressing climate change as a global community: “If it actually is the case that innovation requires contributions from all these different places and all of them are making money and benefiting from this, then the stakeholders are also much broader.” According to traditional political-economic thinking, developing countries typically have to be convinced to switch to green technologies. But now, the benefits of going green are revealed through economic returns. Green policies don’t just have to be idealistic – they can be part of a serious economic argument about how to grow profitable high-tech industries. Nahm finds it to be “a much more hopeful framework” for effecting change when “the benefits distribute broadly” – both economically and environmentally.

The tide is clearly shifting, but governments are often slow to notice and encourage this change. In order to support the renewable energy sector, government policies must reflect the urgency of climate change and the new reality of international collaboration. But according to Nahm, there are some major obstacles to productive policy changes. “When you look at innovation and industry policies you have these national attitudes of ‘How do we protect what we have against everybody else?’ There is often this temptation to shut everyone out.”

This national self-interest is ultimately self-defeating. By shedding light on new economic opportunities and interconnected relationships, Nahm hopes to shift the policy debate toward a more global approach to renewable energy.  “The benefits are global, so let's try to figure out how everyone can have their share.”