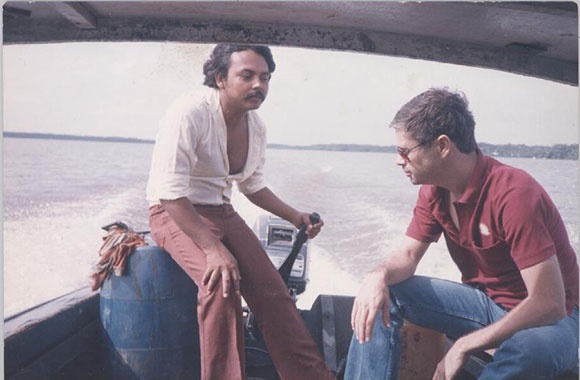 “But I want to ask: What happened yesterday? What are the future implications of what’s happening now? If you’re too focused on now you forget to ask these questions.”

Read Kinzer's reaction to President Obama's September 10 speech on how to U.S. will face the threat posed by ISIS.

As the Nicaragua bureau chief for the New York Times in the tumultuous 1980s, Kinzer was covering a student rally when the Sandinista police shot Soviet-made tear gas into the crowd.  A year later in Panama, he again found himself in the midst of a gas cloud, this time covering protests against the Noriega regime. The Panamanian tear gas was imported from the United States, and the burn in his nostrils was far stronger than the Soviet stuff. The difference made it obvious who would win the Cold War by the smell of the gas, Kinzer says.  “It was another example of America’s great technical prowess, even though I wasn’t in a mood to admire it.”

Whether covering active war zones or opining on international culture, Kinzer’s nose for finding the story has taken him all over the world. After Nicaragua, he served as bureau chief in Germany in the early ’90s and then took over as the first chief of the newly opened Istanbul bureau in 1996, logging more than 20 years as a foreign correspondent.

A world away from whizzing bullets and coups d’état, Kinzer is now a visiting fellow in international studies at the Watson Institute.  Here he seeks distance from the fast-paced, myopic world of a foreign correspondent to ponder the larger patterns in foreign policy.

“News is all about what’s happening right now,” says Kinzer. “But I want to ask: What happened yesterday? What are the future implications of what’s happening now? If you’re too focused on now you forget to ask these questions.”

For Kinzer, Watson is the ideal platform to bring these questions to the forefront of the policy conversation.  After a career dedicated to communicating important global events to the public, Kinzer’s role at the Watson is to bridge academia and on-the-ground knowledge.

“I want to bring my experience in various parts of the world to bear on my work here, and help project this institution’s wisdom and ideas to the wider world. I want to promote the stated objective of Watson’s new director [Rick Locke]: our work should all be aimed at trying to create a more just and peaceful world."

Kinzer is also relishing his role as a teacher. For undergraduate students at Brown, his most striking characteristic is neither his intrepidity nor his knack for weaving personal stories into explanations of global phenomena; it’s his insatiable curiosity. An academic whose research is directly tied to his own experiences at the center of his generation’s most important events, Kinzer’s mind is constantly probing. A casual conversation turns into a history of one’s family tree. A story from a recent vacation is quickly dissected in terms of geo-political patterns.

Kinzer hopes to spread this curiosity to his students. “The spectrum of acceptable opinions on foreign policy in this country is becoming increasingly narrow…. We should be producing critical thinkers, skeptics.  [At Brown and Watson] we should be producing a generation that thinks differently.” He is already at work designing a course on international journalism for the spring 2015 semester.

Fresh from his book tour for his recently published biography of the Dulles Brothers, Kinzer has already started work on a new book, which will look at the roots of American expansionism.  With the situation in Iraq and Syria growing more intense by the day, and with the state of Ukraine up in the air, his critical analysis of the United States’ role in the world is both timely and important.

Books and  brainy community notwithstanding, does the life of an academic in Rhode Island seem a bit droll to a globetrotting correspondent? Apparently not.

“I’ve seen enough blood, dead bodies, and crying mothers to last me several lifetimes,” says Kinzer. “I have a rich enough store of memories and experiences. Now I want to try and makes sense of it all.”