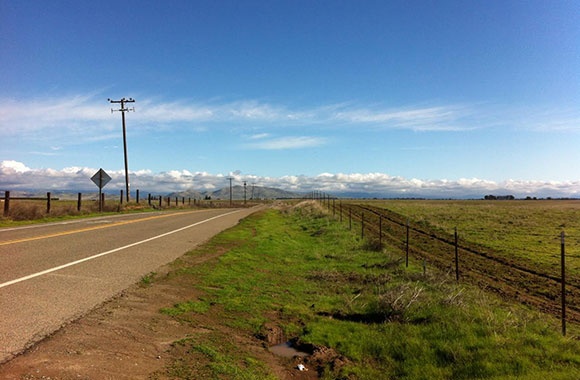 "People are not hungry because there’s not enough food; the problem is people can’t afford to buy it."

Hunger Is a Political Problem

On Michelle Jurkovich’s office wall, there is a black and white photo of an infant wearing a bonnet and standing in front of a field on a farm in Fresno, California. This is her great aunt, Marjorie Thomsen, in about 1926, at age two. In the foreground are clusters of hens; in the background, a small house and rows of crops.

The photo comes from her mother’s side of the family, who farmed in Fresno, at one point owning their own farm and after the Great Depression as tenant farmers, and where Michelle, a fifth-generation from the area, was born and raised.

Fresno County is a dichotomy, says Jurkovich: it is the site simultaneously of one of the country’s highest rates of concentrated poverty, and of the highest level of agricultural production.

While growing up there, Jurkovich observed a “startling contrast of agricultural plenty side-by-side with hunger.” It was being raised around this dichotomy that fueled her fascination with hunger, which is the primary focus of her work.

“In that environment hunger is very clearly a political problem,” she says. “People are not hungry because there’s not enough food; the problem is people can’t afford to buy it. And how you work to fix that, what you consider appropriate responses to this hunger, is deeply political."

Jurkovich earned her BA in English at Fresno State University, favoring the writings of Anne Bradstreet, Whitman, and Hawthorne.  After graduating in 2005, she accepted an internship in the US House of Representatives in Washington, DC through a program run by the Kenneth L. Maddy Institute, which takes “Valley kids” (students from the San Joaquin Valley) and sends them to DC to learn about the inner workings of the government. She spent a summer on Capitol Hill before transitioning to an internship in the White House.

The political environment of DC energized Jurkovich. Her internship in the White House started two weeks after Hurricane Katrina hit, and she left a month after then Chief of Staff to the Vice President, Scooter Libby, was indicted.

In the end, Jurkovich decided that while she was interested in politics, she didn’t want to work that closely within the political machine.

Instead, she returned to Fresno and applied to graduate school and decided to study hunger, “something I had been interested in and puzzled by for a very long time,” she says.

Unfortunately, it wasn’t until later that she realized, while pursuing her master’s degree in political science at California State University, Los Angeles, that political science didn’t really spend much time talking about hunger.

“But I had really good advisers,” Jurkovich recalls, “who helped bring an important conversation [hunger and food security] into this discipline, which is usually more interested in war and weapons.”

“Hunger is not very sexy, but it’s a huge issue,” she says, noting that more people die of hunger-related causes than all wars, civil and international, combined.

At George Washington University, where Jurkovich earned her PhD, she was reunited with DC, the city that had originally introduced her to politics.  While in graduate school, she met her adviser and mentor Martha Finnemore. Her dissertation, which explores blame diffusion in international hunger campaigns, surveyed senior executive staff and international anti-hunger campaigns like OxFam, World Vision, Bread for the World, and Amnesty, as well as foundations such as Gates and Rockefeller.  In the survey, she asked respondents: what causes hunger, who’s to blame and how does one solve it?

Jurkovich was surprised to find that each member of these organizations had different answers.  Not having a clear “prescriptive norm” disallows common centralized advocacy campaigns on a specific target, making the issue of hunger uniquely problematic and hard to solve.

"If there isn't an underlying norm in the issue area of hunger, it’s much more challenging to link a particular behavior to one actor," she explains.

For her next project, Jurkovich is excited to take advantage of Watson’s interdisciplinary environment to compare hunger and education.

“Watson is exceptional,” she says, sitting in her sun-filled third-floor office. “It's a place where they don't want you to hide the fact that you're interested in policy-relevant stuff—in fact, they encourage it. They want your work to be rigorous and to be able to bridge conversations in academia and the broader policy world.

“My dissertation was all about food, and what I’m trying to do now is see how can we use comparative cases to sharpen and hone. I think we learn a lot from comparison… There's a tendency to think things are inevitable, that the world looks the way it does right now because it had to …. The way you challenge this as a political scientist is to find issue areas that are equally hard and expensive [and that have] gone a different way.”

Jurkovich looks at the photo of the young girl on the wall.

“I think in trying to understand big problems, like hunger, it's essential to be mindful of perspective—and I mean this in a few different ways.  The first is understanding that all problems worth studying are complex, and it's important to be able to look at them from different angles, with different lenses. In part, this means turning issue areas over in our minds and trying to come at them from different angles, to see what new things we learn. It also means being aware of the limitations of our own disciplinary training in conditioning us to ask only certain questions or to look at problems in only certain ways.

“I gain new perspective from taking my research outside of my academic peer group and discussing it with, for instance, people working in the policy world, friends back in Fresno, or my students during lecture. I'm always challenged by my communities outside my academic peer group—both in terms of more clearly articulating what I'm saying but also in challenging my perspective. What am I missing by looking at the problem the way I am?  Is what I'm doing interesting to broader audiences?  Have I become too insular in my thinking? Will I be able to contribute something meaningful at the end of this project?  These are things I am forced to think about when I broaden my community and open myself up to looking at important issues with different lenses.”