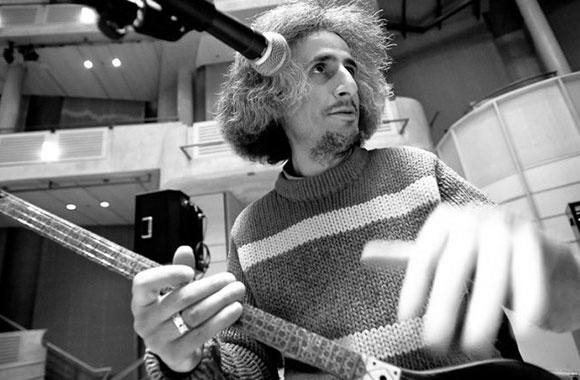 “My goal was to have my corner, and play music until the day I died.”

Not Your Grandfather’s Persian Music

Born in the small city of Torbat-e Jam in northeastern Iran, Mohsen Namjoo was never good at fulfilling expectations.  His mother, like most mothers, wanted him to study something practical, such as science or business. From an early age, his love for music and verse kept his mind closer to harmonic scales and the poems of Hafez.  While at college in Tehran, his songs exploded onto the underground artists’ scene and he was proclaimed a rock star. Still, he would sooner stay in his studio mixing music than signing autographs and playing sold out concerts.  To Iranians around the world looking to fuse their culture with others, his bold mingling of musical styles made him an icon. When he became exiled from Iran for singing Qu’ranic verses over western pop rhythms, the Iranian government labeled him a political dissident.

Rock star, icon, dissident — Namjoo doesn’t want any of these titles. He prefers to simply call himself a researcher: “My goal was to have my corner, and play music until the day I died.”

Today, he also takes pride in the title of teacher. As visiting professor of Iranian Studies with Middle East Studies, he teaches “Tradition and Protest: Iranian and Persian Music.” The course revolves around the exchange of Persian music with western theory, combining scales and lyrics from around the world and across centuries to create cultural bridges. This exchange is fundamental to Namjoo’s goal of giving new life to Persian music. The youth of Iran need an outlet, says Namjoo, a musical language to express the sentiments of their new generation.  Traditional Persian music is like a sleeping man, and most musicians are trying to gently shake him from his slumber. “I want to kick him awake,” says Namjoo, stamping his foot on the ground in rhythm.

Called the “Iranian Bob Dylan” by the New York Times, Namjoo’s music is best known for his iconoclastic blending of contemporary and traditional rhythms and his profoundly beautiful lyrics, often taken from classical Persian poetry. Although he describes himself as secular, Namjoo draws inspiration from sacred texts. When he was 21, he reworked a story from the Qu’ran to tell his own story of heartbreak. In the verses, a man eternally grasps a rope from god, representing the unyielding perseverance of faith.  In the song, Namjoo describes himself desperately grasping a strand of his ex-girlfriend’s hair as she walks away.

“Having the inspiration from the past, I wrote the lyrics as someone now in the 21st century would experience them … and then I laid them over the music of Johann Sebastian Bach.”

The song became a hit, spreading through Tehran’s underground network of artists and intellectuals.

In the crackdown after the Green Revolution of 2009, uneasy with his popularity among young people, the Iranian government banned Namjoo from performing in official venues.  Given five months to leave, he obtained a student visa to Vienna -- and the opportunity to be exposed to different types of music. He didn’t mind; having grown uncomfortable with his celebrity status, Namjoo says he appreciated the creative freedom he found within academia. At a time when many influential Iranians intellectuals were being thrown into prison, he was very lucky to have the opportunity to leave. Just a few months after leaving he received word from Iran: the government had sentenced him in absentia to five years in prison.  He could no longer return home.

Although he misses his mother and siblings, Namjoo is happy doing what he loves in the US—teaching and experimenting with music. “I love being in the academic ambience, not being on stage ... I love having this opportunity to teach,” he says.

Along with his residency at Middle East Studies, he recently moved to Brooklyn, which he describes as a paradise for a musician looking to blend styles from around the globe.  He plans to produce a new album over the summer, though instead of his usual avant-garde style he wants to challenge himself to make calm background music, “something you would listen to at a restaurant.” He also hopes in the future to create two operas based on Persian mythology.

For now, though, Mohsen Namjoo—rock star, exile, voice of a new generation—seems to have found his corner to teach and play music. “To me, the phrase ‘think globally, act locally’ is very true. You think about all the bigger patterns happening in the world, but you enact it within communities right here.”

Mohsen Namjoo will be in residence through fall 2014, when he will teach two courses —Organology of Iranian Instruments and Contemporary Iranian Poetry.  On May 10, he held a concert and lecture titled “When you are talking about Iranian fusion, what are you talking about?”