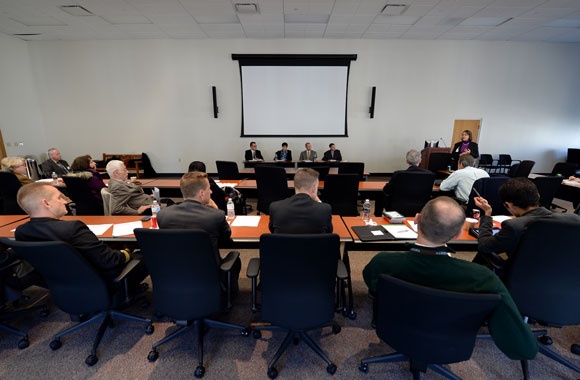 Promoting International Peace and Security: Challenges for the Next Decade

Watson and the Naval War College team up for a faculty research colloquium.

Faculty from two of Rhode Island’s most recognized schools came together last Friday in Newport at the Naval War College (NWC) as part of an effort to build closer ties.

Members of the NWC and the Watson Institute’s faculties met for a research colloquium with the theme “Promoting International Peace and Security: Challenges for the Next Decade.”

The colloquium is the first event at NWC and another step for the two schools to create a more formalized relationship to better facilitate faculty interaction beneficial to both.  A similar event was held at the Watson Institute earlier this year.

Brown and NWC signed an agreement this summer to promote collaborative research and teaching.  “Both faculties have enthusiastically embraced deeper intellectual engagement and exchange of ideas,” said The Honorable Sue Eckert, senior fellow at the Watson Institute.

According to Eckert, two faculty groups have already organized regular discussions on Russian and Ukrainian issues, as well as nuclear weapons. “Such collaboration allows both academic institutions to leverage the expertise of the other in addressing the challenging problems facing our world today.”

“I think there is a great deal of interest from the Watson Institute to learn about alternative perspectives on security issues and to get some views that are unique to Naval War College,” said Professor Terry Roehrig, professor of national security affairs at NWC. “Sharing these perspectives is an excellent way of promoting collaboration and increased understanding.”

The two schools will host a distinguished lecture series, and will create national security fellowships for affiliation and visiting status at each institution. Enhanced research and a spring cybersecurity workshop are already planned.

The Colloquium included two sessions. The first, titled "New Security Challenges," featured presentations by Robert Blair of the Watson Institute and Yale University, on building trust in war-torn governments; Dr. Adam Levine, professor of emergency medicine and director of the global emergency medicine fellowship at Brown, on the Ebola outbreak; and Professor Chris Demchak, of the Naval War College, on cybersecurity.