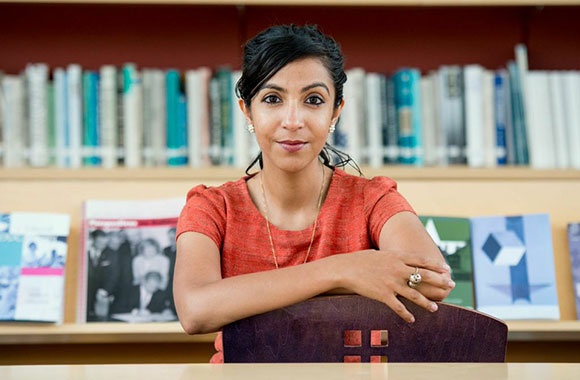 “It’s not easy to get to the right question – it’s the most fun, but also the most intimidating part of it. And obviously, that’s only step one. Then you have to do all the hard work and find the answer.”

A political scientist applies her inquiring mind to comparative politics, notions of identity – and more.

Prerna Singh is motivated by big questions. Her questions drove her to Cambridge University in the UK. They drove her to Princeton, where she earned her master’s and PhD in political science. And they drove her to Harvard, where she served as assistant professor in the Department of Government. Now they have brought her to the Watson Institute, where she is the newly appointed Mahatma Gandhi Assistant Professor of Political Science and International Studies.

The daughter of a bureaucrat and an educationist, Singh was raised in Delhi and Rajasthan. As a child she travelled with her father as he canvassed the country inspecting government facilities, and witnessed the wide variations in the quality of Indian life. Chatting with children in the village schools, Singh learned that people in rural areas “clearly didn’t have access to anything like the same facilities [as I did],” she says. “To some extent, my interest in welfare stemmed from my early exposure to these issues through my father’s work.

It was later, in college, that her passion for politics was ignited.

In 1998, while an undergraduate in economics at Delhi University, Singh learned about the testing of nuclear weapons in India. “My gut said it was a bad thing. But I couldn’t really say why it was a bad thing. I didn’t have an answer to that.” In response, she wrote an essay that reflected her own self-reading and understanding of the prisoner’s dilemma. She shared it with only a few people – her dad, for one, and her boyfriend (and now husband) Bhrigupati Singh, who is an assistant professor of anthropology at Brown and a faculty fellow at Watson. “I’m not sure why I wrote it or who I wrote it for – it was kind of naïve now that I think of it,” Singh says. “But it was important for me to think through for myself why I thought India’s nuclear testing made us all more unsafe.”

That’s when she realized she wanted to pursue political science.

Singh received a Cambridge-Nehru fellowship to read social and political sciences at Cambridge University – at a radical feminist college, she points out, where she focused on the history of political thought but where her readings also opened her up to a range of scholars who were tackling “really important questions about India.” She discovered the work of Atul Kohli, which helped her gain insights into such questions as Why is India, despite almost all pointers to the contrary, a democracy? What caused the country’s “crisis of governability”? What are the causes and consequences of different rates and models of economic development in India and beyond?

“I knew I wanted to ask and answer such questions,” Singh says from her sunny office on the third floor of the Institute. “Questions about governance, development, welfare, and identity, especially ethnic identities and nationalism. Questions that were driven by the world around me and which might hopefully also allow something better to happen.” This prompted Singh to pursue a PhD in politics at Princeton under Kohli’s supervision.

Her thesis, which has evolved into a book to be published in 2015, asks why some states in India have social development outcomes that are worse than countries in sub-Saharan Africa, while other states have welfare levels equivalent to those in industrialized countries. Contrary to the most prominent explanations, Singh uses a combination of comparative historical and statistical analysis to trace the variations in social policy and outcomes to differences in the strength of collective identification across Indian states. States that have had a more powerful sense of shared identity – what Singh terms “subnationalism” – are more likely to see the institution of a more progressive social policy and higher levels of education and health outcomes.

Singh explains: “The argument emerged inductively through my work in the field, in particular my reading in the archives. I didn’t go out looking for subnationalism – especially as all the existing literature emphasized other factors, such as party competition and ideology or levels of economic development. The subnationalism argument is new not only in terms of the scholarship on social welfare on India and beyond, but also in pointing to the constructive potential of a collective identity, which usually gets such a bad rep.”

Singh has extended her work in a recent article in Comparative Political Studies called “The Ties That Bind: National Identity Salience and Pro-Social Behavior Toward the Ethnic Other,” Using an online survey experiment, Singh and her grad student co-authors found that the increased salience of an Indian national identity prompted greater generosity and cooperation on the part of Indian Hindus toward Indian Muslims. While the Hindu-Muslim cleavage been a very conflictual one (as Watson colleague Ashutosh Varshney has also shown in his book Ethnic Conflict and Civic Life: Hindus and Muslims in India), this study holds out hope that a shared national identity might bridge even deeply entrenched ethnic boundaries.

Singh is now focusing on questions of discriminatory attitudes and behavior and violence toward women. “In this case, I can’t not try to answer this question,” she says. “I know this is a bold claim, but I don’t think there is a single woman in India who has not been the victim of some form of discrimination or violence. My mum is an amazing, strong woman who grew up under difficult circumstances in a big, tough city – Delhi. My sister and I learned tactics – on the bus you stand with your elbows out, ready to poke groping male hands, for example. But nothing can protect you if you find yourself in the wrong place at the wrong time. And for poorer, lower caste women these are everyday occurrences.

“But why does this happen?” Singh asks. “There is discrimination and violence across the world. What makes India one of the worst places for women? Is it a culture of patriarchy? Is it is a deep failure or even complicity of the institutions that are meant to protect a state’s citizens? I couldn’t be a social scientist from Delhi without trying to understand this question.”

Singh will tackle some of these questions in her own research and with Rose McDermott, a faculty fellow at Watson, and graduate student Michael Dickerson.

Singh also brings her inquisitive approach into the classroom, teaching graduate students in political science and international studies. “I couldn’t think of a better place to be than Brown. There’s a real place for intellectual conversation, which is nice,” Singh says. “Watson is going places and things are happening. There’s a real sense of excitement.”

During her office hours, Singh recounts seeing two different students that afternoon – one undergraduate, one graduate. They conversed at length, but Singh kept pushing them: What is your question? What do you want to ask?

“It’s not easy to get to the right question – it’s the most fun, but also the most intimidating part of it. And obviously, that’s only step one. Then you have to do all the hard work and find the answer.”