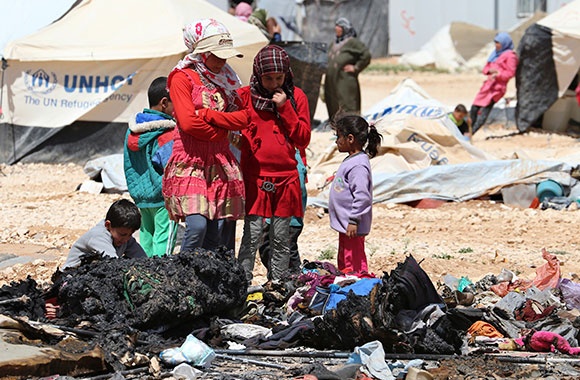 “We can't act like we are going into countries and saving them,” Dhingra says. Real aid means helping them “find their own solutions.”

Understanding How Refugees Are Shaping the History of Jordan

As an American growing up with the specter of the 2003 Iraq War, Reva Dhingra ’14 was acutely aware that US foreign policy and global aid organizations suffer from a dire knowledge deficiency, making missteps by not heeding local knowledge or involving local populations. Even before studying international relations, she recognized the naivety of foreign interests imposing political and social systems without first understanding local communities. “We can't act like we are going into countries and saving them,” Dhingra says. Real aid means helping them “find their own solutions.”

Thanks to a Fulbright grant, Dhingra (a dual concentrator in Middle East studies and international relations) will take this “solutions-based approach” to Jordan after graduation this month. There she will study and work with the burgeoning refugee populations that decades-long conflicts in the Middle East have produced. Jordan, Dhingra says, has increasingly become a destination for refugees: Palestinians, Iraqis, and, most recently, Syrians. Not only does Jordan have the highest refugee-to-population ratio in the world, but its refugees stay long periods of time, becoming perpetually displaced and gradually changing the landscape of Jordanian civil society and national identity.

In Jordan, Dhingra plans to interview locals and refugees, observe aid practices, and, she hopes, open a learning center where locals and refugees can teach each other. This will facilitate cultural exchange, which she believes is the key to the refugee situation in Jordan. And getting local communities involved in their own development will ease tensions with refugees and create opportunities for Jordanians.

Dhingra didn’t always plan to pursue international relations on the ground. Drawn to diplomacy, she initially wanted to enter the Foreign Service. But after receiving a grant to study in Morocco her perspective changed. Being in an Arabic-speaking country gave her a sense that learning foreign languages wasn’t enough to truly understand people. By actually working within communities she came to understand just how necessary local interactions are.

Shifting from a top-down to a bottom-up approach, Dhingra studied in Jordan her junior year, completing an independent study on the security and resource implications of the Syrian refugee crisis with Beshara Doumani, the director of Middle East Studies. This research evolved into a senior thesis on the impact of refugees on Jordan’s economy, governance, and society. Her thesis adviser, Sa’ed Atshan, is a postdoctoral fellow in international studies at Watson. Atshan says that not only is Dhingra “already at a graduate level” in her academic work, but she is also “known on campus for her leadership and for her important contributions to the broader community.” He is especially impressed with her work as the co-editor in chief of the Brown Journal of World Affairs, a journal edited by Brown undergraduates featuring publications from professors and policymakers.

Atshan describes Dhingra’s research as “timely.” Prevailing wisdom holds that refugees sap resources and reduce security, but in working with local Jordanians and refugees Dhingra unexpectedly found that “refugees are engaging and building Jordan in a lot of ways” by participating in the economy and building social networks.

Since then her research has focused on recognizing that refugees play a role in Jordan’s history and identity. Scholars and foreign policymakers tend to only study the Jordanian state’s reaction to refugees. But, Dhingra says, despite being enmeshed in global political conflicts, “refugees are acting as individual agents, [so] there’s a little more to the story” than just being acted upon.

With her Fulbright grant, Dhingra will investigate the “micro-dynamics” of that exchange by illuminating how refugees affect the development of their host communities. Her goal is not only to understand, but also to improve how humanitarian organizations interact with refugees. “I’m looking for ways to actually improve aid or help ameliorate tensions between refugees and host communities,” she says.

Fulbrighters are intended to be unofficial cultural ambassadors, and Dhingra plans use her growing knowledge of local issues to promote diplomacy on the ground so that, at the very least, “Syrians and Jordanians can understand each others’ perspectives better.”