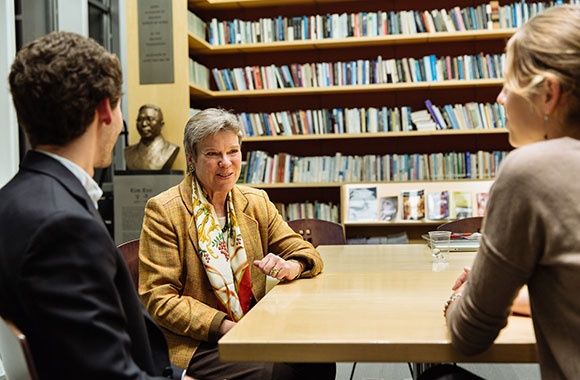 "[I]t is wise to keep a sort of Damocles’ sword hanging over everybody, that, ‘Okay we got this agreed today, but if you reopen this tomorrow then I’m going to open up something else over here.’ It is a basic and very clever rule of negotiations."

Rose Gottemoeller, Under Secretary of State for Arms Control and International Security

Government and the Academy: Natural Allies?

For Under Secretary of State for Arms Control and International Security Rose Gottemoeller, dialogue between policymakers and academics is crucial to informed international security.

“One of the basic rules of negotiation is that nothing is agreed until everything is agreed,” said Rose Gottemoeller, the Under Secretary of State for Arms Control and International Security, on a visit to Brown on November 5.

Under Secretary Gottemoeller, a senior adviser to the President and Secretary of State, is the State Department’s leading official on US security policy, nuclear nonproliferation, and arms control. During her visit, Gottemoeller conducted an interview with the Brown Journal of World Affairs, participated in a roundtable discussion with Brown and US Naval War College students and faculty, and, as part of the Watson Distinguished Speaker Series, gave a public lecture on nonproliferation and international treaties.

As the lead US negotiator on the New Strategic Arms Reduction Treaty (New START), Gottemoeller said her role was to “take the President’s Prague speech from April 2009 and run with it, and to refresh …  the notion that we could have successful bilateral nuclear arms reduction with the Russians. And it worked.”

During her lecture, Gottemoeller stressed the importance of ratifying the Comprehensive Test Ban Treaty because of its role in impeding nuclear weapons states from testing new designs, constricting the arms race, and preventing health risks associated with nuclear explosions. She also fielded questions about the prospects of terrorists acquiring nuclear weapons and cybersecurity.

She also emphasized the importance of a strong relationship between the policy world and academia, both to inform decisionmaking in government and to develop the next generation of leaders in security policy. During the roundtable discussion, she explained that she has made it a point to continually go through the “revolving door” that leads from government to the think tank community, to academia, and back to government.

In her interview with BJWA Editor-in-Chief Sabin Ray ’15 and Assistant Editor Michael Chernin ’15, Gottemoeller discussed the rise of non-state actors and nonproliferation, the process of negotiating the New START Treaty, gender dynamics in the field of security studies, and US–Russian relations. Asked whether reducing US reliance on nuclear weapons would negatively impact our extended deterrence, she explained, “No, because extended deterrence is not only about nuclear weapons. Extended deterrence has to do with our complete alliance relationship and that contains within it a full panoply of weapons systems, as well as effective command, control, communications, and reconnaissance capabilities.”

To facilitate treaty negotiation, she said, “it is wise to keep a sort of Damocles’ sword hanging over everybody, that, ‘Okay we got this agreed today, but if you reopen this tomorrow then I’m going to open up something else over here.’ It is a basic and very clever rule of negotiations.

Students asked the Under Secretary about her role as a “connective thread” between officials who hailed from different schools of thought regarding nuclear weapons, and different bureaus within the State Department.

“The Bureau of International Security and Nonproliferation deals with preventing proliferation of weapons of mass destruction and their delivery vehicles,” Gottemoeller said, “and the Political–Military Affairs Bureau is responsible for licensing weapons sales. And so you might think, ‘Oh, they’re very, very disparate.’ But everything we do in terms of our defense sales around the world is done with a complete overlay of our nonproliferation policy, so strong export controls are really important, as well as strong licensing policy, with things like end-use agreements… it hasn’t been that hard to find connectivity between departments.”

Students gained perspective on some of the most pressing issues facing the international community today. “You can’t challenge a State Department document or ask it for clarification,” said Chernin. “As a student, speaking with the Under Secretary was extremely valuable. During high-level negotiations like the current talks with Iran, the media is so starved for details that I think it’s easy to become cynical and assume negotiations are a futile exercise. That’s why it’s important for students to engage with policymakers and officials like Under Secretary Gottemoeller firsthand, and understand as best we can how negotiations function.”

When asked about the interview, Ray said, “Discussing U.S. nuclear policy and gender dynamics in our government with a senior member of Obama’s administration was an experience I’ll carry with me well after I’ve graduated. It was inspiring that, even while talking to an official who influences decisionmaking regarding the world’s most destructive weapons, I was reminded of our shared humanity when Under Secretary Gottemoeller discussed the importance of bilateral negotiations.”