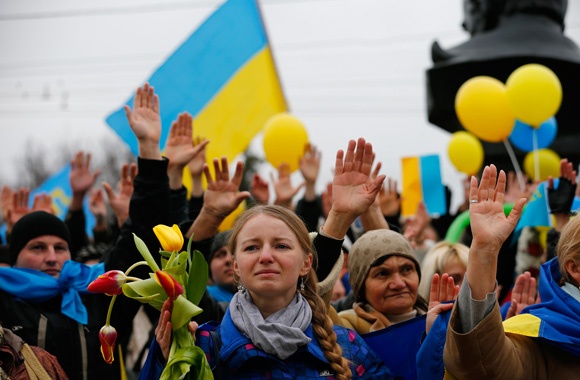 Looking past the conflict with Russia to social change in Ukraine

Michael Kennedy is an expert on power, social change, and peace in Eastern Europe and the post-Soviet states. So, on the subject of Russia and Ukraine, he’s got opinions.

Here are a few:

Kennedy is most ardent on this last point.

“This is not Cold War II,” he says. “The story is more nuanced, and much bigger, than that.”

A professor of sociology and international studies at Brown and the Watson Institute (and a keen user of social media – his Twitter handle is @Prof_Kennedy), Kennedy believes Russia’s reasons for invading Ukraine and annexing Crimea are not rooted in political ideology, as the Cold War was. This is not an epic battle over the merits of communism and capitalism.

Rather, Kennedy says, the crisis is about Russian imperialism and self-determination and democracy in Ukraine. And, Kennedy believes, it’s about grassroots movements and the future of freedom around the globe.

“Everybody is so anxious to put the genie back in the bottle over this major conflict between the East and the West, between Russia and the U.S., that they’re missing the transformation of Ukraine,” Kennedy says.

“Ukraine just staged a largely nonviolent revolution against corruption – and won,” he continues. “And that is the reason Putin is so desperate to hide this narrative. Because that kind of revolution could happen in Russia. And that is something Putin can’t abide.”

The revolution in question began just five months ago, in November 2013, when Ukrainians gathered in Kiev to protest former President Viktor Yanukovych’s refusal to sign a political and trade agreement with the European Union.

Ukraine is crippled with debt, and the agreement would’ve guaranteed $827 million in loans and bind Ukraine to Europe through shared values including democracy, good governance, and respect for human rights. Instead, Yanukovych pushed for closer ties to Russia, which promised $15 billion in loans as well as cheaper gas and forgiven debts.

Thousands of pro-European protestors – 50,000 to 800,000 at any given time – demonstrated in Kiev’s Independence Square throughout the winter, demonstrations that one commentator said amounted to “the largest pro-European rally in history.”

Police and protestors, however, clashed recurrently. And the crowd began calling for the ouster of Yanukovych, who lived in a $75 million mansion with a golf course and zoo and who was accused of cronyism, police brutality, and embezzlement.

More than 70 protestors were killed in street clashes. Tensions escalated.

“What Ukraine showed is that change is possible through social movements,” Kennedy said. “And there are movements around the world – in Brazil, Turkey, Venezuela, Egypt, Spain, Greece, even the Occupy movement right here – that fight corruption and the consolidation of power. Everyday people are rising up against political elites. Putin’s invasion is distracting us from that global movement for meaningful change. So the stakes are high. What is going to win? Lies or truth? Aggression or peace?”

Kennedy fumes that Europe and the U.S. didn’t hit Russia with swift, stiff economic sanctions immediately after the Ukraine invasion. Now he’s worried about further takeovers in Ukraine, and perhaps even Moldova. He thinks economic hardball is in order. Indeed, more extensive military cooperation between NATO and Ukraine must be considered if only for the security of NATO nations themselves. At the very least, NATO must consider whether to create a no-fly-zone over Ukraine should Russia invade the Ukrainian mainland.

“At the same time,” he says, “all actors must prevent war's escalation. That's the impossible tightrope we must manage – even as we remember the bravery and courage of the Ukrainian people in their struggle to support democracy, to end corruption, and to maintain territorial integrity.”