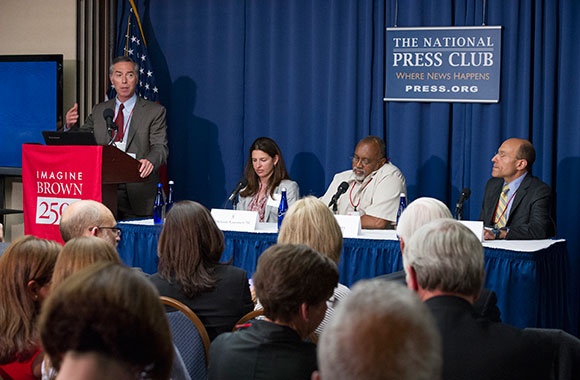 “It is our hope that we will be seen by Washington as a resource that can inform domestic and foreign policy and in turn make the world safer, fairer, and more peaceful."

Richard Locke, director of the Watson Institute for International Studies

The Watson Institute in Washington, D.C.

The afternoon kicked off with a keynote address from U.S. Secretary of Labor Thomas Perez '83. In his remarks, Secretary Perez spoke of the need for a healthier, more sustainable work-life balance in America, and the necessity of raising the minimum wage nationwide: “Anyone who works a full-time job should not be living in poverty.” Additionally, Perez expressed his thanks to President Paxson and Howard R. Swearer Director of the Watson Institute for International Studies and Professor of Political Science Richard M. Locke for their dedication to reinvigorating the Institute, and the work performed within it.

Immediately following Secretary Perez’s address, the standing-room-only crowd was treated to a panel featuring three Watson Institute faculty fellows and the research each is pursuing. "This is just a small sample of the cutting-edge research Watson faculty are doing in three key areas—security, development, and governance—in a variety of regions across the globe,” explained Professor Locke. “It is our hope that we will be seen by Washington as a resource that can inform domestic and foreign policy and in turn make the world safer, fairer, and more peaceful."

Associate Professor of Political Science, Melani Cammett ’91, discussed the declining quality of life in the Middle East alongside the region's increase in governmental repression, while Professor of Economics and Merton P. Stoltz Professor of Social Sciences Glenn Loury spoke of his work studying incarceration in the U.S. and its failure as a social tool. “We’re past the point of diminishing returns,” he said. “The number of people in prison can no longer be justified by any potential benefits.” Additionally, Professor Edward Steinfeld, Director of the China Initiative, talked about the need for the U.S. to “lean in” and learn from China’s technological and economical prowess in order to stay competitive in the global marketplace.

At the cocktail reception, President Paxson thanked the nearly 300 Brown alumni and friends in attendance. Guests sampled cupcakes and held spirited conversations with one another on topics sparked by the panel discussion.

Researchers, faculty, and students at the Watson Institute are poised to produce work that visibly and positively impacts the world. Support for Watson will reinforce the University’s role as a leader of interdisciplinary, international scholarship, and will ensure that such ambitious, important work continues.