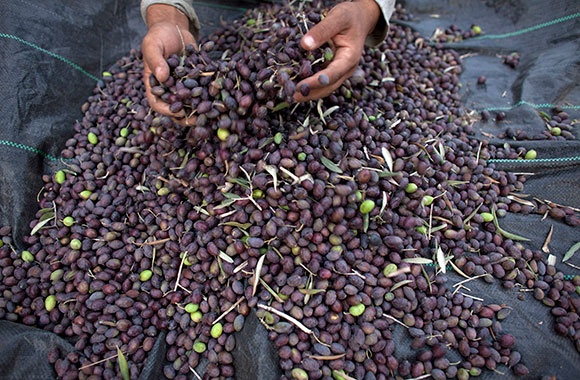 A Palestinian man sorts harvested olives at a grove near Farha village, north of the West Bank city of Ramallah. REUTERS/Darren Whiteside

“If you want to understand Palestinian society and contemporary politics, you have to understand the impact of the humanitarian aid regime. It’s fundamental.”

Engaged Scholarship in the Palestinian Territories

Postdoctoral Fellow Sa’ed Atshan traces his pursuit of knowledge and justice to his early education at the Ramallah Friends School in the Palestinian Territories. The Quaker movement has been at the forefront of social justice movements from the abolition of slavery to women’s suffrage, and the Ramallah Friends School has stood as a bastion of democratic education in the West Bank since 1869. Atshan remembers one of his first Quaker meetings, where “A boy, maybe eight years old, stood up and said ‘I want to talk about beauty and I want to talk about ugliness.  Why is it that we label insects and bugs as ugly? I think they’re beautiful and they have lives of their own, and I don’t think we should step on them.’” Sa’ed Atshan, as a teacher, practitioner, and activist, encourages us to ask the same profound questions in our own lives.

In conversation, though, Atshan initially defers questions so that he can ask his own, and it takes a bit to steer past his hospitality to start him talking about his work. But once he does start speaking personally, especially about his home in the Palestinian Territories, his words flow eloquently and easily. He moves seamlessly and rapidly between emotional narratives—stories of oppression and injustice—and theories about the intersectionality or racialization that underpin them.

In a young career (he received his BA from Swarthmore in 2006), Atshan has received an impressive catalogue of honors: he was a Mellon Mays Fellow (the first Arab American to win the award) and a Jack Kent Cook Graduate Scholar at Harvard’s Kennedy School, and he received a Soros Fellowship for New Americans.  His career has been consummately academic—he began lecturing on peace and justice at Tufts while completing his PhD at Harvard in anthropology and Middle East studies—but there is none of the airy detachment of an ivory tower scholar about him.  It is impossible to listen to him discuss his research without also sensing Atshan’s potent brand of engaged scholarship.

“Some scholars just bury their heads in the sand, and are disengaged from the rest of the world.  That is not my cup of tea.” Atshan’s work has brought him to human rights organizations such as the American Civil Liberties Union, the UN High Commission on Refugees, and an organization called Al-Qaws (The Rainbow) that fights for Palestinian LGBTQ rights. For Atshan, activism isn’t just about focusing on specific causes; all forms of oppression, from racism and colonialism to homophobia and religious intolerance, intersect and cannot be disaggregated from each other.

At the Watson Institute, Atshan works to foster a greater awareness of Palestinian issues and Middle Eastern Studies. In the fall, he hosted a workshop on “The Geography of International Aid in the Palestinian Territories,” and is currently coordinating the 2014 New Directions in Palestinian Studies Symposium to be held at Brown next month. He discusses the role humanitarian aid has played in the conflict, and his research aims to prompt deeper inquiry into the ways humanitarian aid affects culture and politics.

Atshan’s “schizophrenic” split between academia and practice occasionally leaves him torn between the world of the mind and that of action. He also finds, however, that bridging this gap enhances all parts of his work. “The sphere of scholarship, the sphere of activism, and the sphere of [practice], all work with each other to enrich the classroom, and enrich one another.”  The ideas he discusses in his classroom directly inform his work fighting for social justice and advising governments and international organizations. Atshan hopes to inspire the same sense of engagement and courage in his students, echoing the clarion call for a more just world that he first heard in a Quaker meeting in Ramallah.