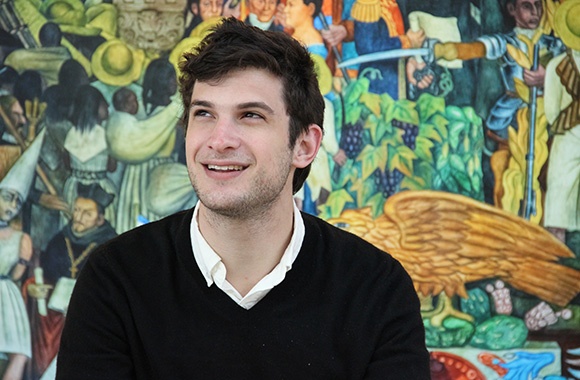 David Adler ’14 already had a long list of awards, projects, and affiliations to his name – including being a member of the Brown International Scholarship Program, a fellow in the Brown-India Initiative, a Watson Undergraduate Fellow, and an undergraduate fellow at Brown’s Cogut Center for the Humanities. As of March, he can add “Fulbright scholar” to the list. After graduation, Adler will head to Mexico City, where he will research public policy and housing at CEDUA, an urban demographic and environmental studies center at El Colegio de México.

In Mexico, Adler will work on low-income housing policy, focusing on the point at which policy aspirations break down into practical realities. While Mexicans have a “constitutional right to decent housing” and “the political infrastructure is there,” he says, these “progressive political elements” give way to the “disappointing reality of slums.” Adler’s research will explore this disconnect and shed light on the ways in which new types of microfinance loans are seeking to bridge this gap.

Adler’s international study began 9,000 miles away from Mexico, in India. During his junior year, he studied at St. Stephen's College in New Delhi, and worked with Brown professor Patrick Heller at the Centre for Policy Research, an independent and non-partisan research institute. Last summer Adler turned this research into a Brown-India Initiative fellowship, pursuing his research into slum rehabilitation and public policy. This in turn culminated in his senior thesis, which examines the government bureaucracies involved in slum rehabilitation. Adler hopes to “open the black box of India’s infamous bureaucracy and understand its processes” in order to understand the “disjuncture between public discourse and reality.”

Adler’s interest in microfinance is not merely academic; indeed, he hopes one day to found a startup to facilitate microfinance in Mexico, and has been working with fellow Brown undergraduates to provide a mobile platform for peer-to-peer lending. “The developing world has seen this massive mobile money revolution,” he explains, and “emergent technologies have been empowering in all sorts of ways.” Microfinance is already thriving in Mexico, particularly a mode of lending called the ROSCA, in which several people pool their resources together to jointly borrow, lend, and save money. Adler wants to facilitate this indigenous practice through the use 21st-century technology. His intention is to “address a need that already exists” through the broader goal of making technology and finance serve the needs of the poor.

Adler first learned about microfinance in a seminar with Richard Locke, director of the Watson Institute. The seminar highlighted the shortfalls of microfinance and spurred Adler to think of new and better ways for microfinance to serve those in need. He has since worked closely with Locke, who describes him as “one of the most intellectually curious and capable students I have taught in over 25 years,” able “to weave together different literatures from distinct intellectual traditions and make sense of an absurdly complicated reality.”

Adler describes his concentration, development studies, as “experimental international relations.” In keeping with this spirit of experimentation, Adler and several fellow undergraduates organized the inaugural Watson Institute Undergraduate Research Conference on April 5. The conference attracted students from across the Northeast and featured inventive presentations on international issues. Keynote speaker Stephen Kinzer, visiting fellow in international studies and an award-winning former foreign correspondent for The New York Times, addressed the need for such ingenuity. Acknowledging that today’s undergraduates are “entering into a world of turmoil,” Kinzer maintained that this is also an exciting moment and “an opportunity for innovative international study” that is “fully open to creativity.”

This challenge to think outside the box about international issues motivates Adler’s Fulbright research on housing in Mexico City and his ambitious microfinance project. It is also what makes him “an ideal Fulbrighter,” according to Linda Dunleavy, associate dean of the college for fellowships. She worked closely with Adler on his Fulbright application and is confident that he will “make a strong impression abroad as an ambassador for Brown and the United States.”