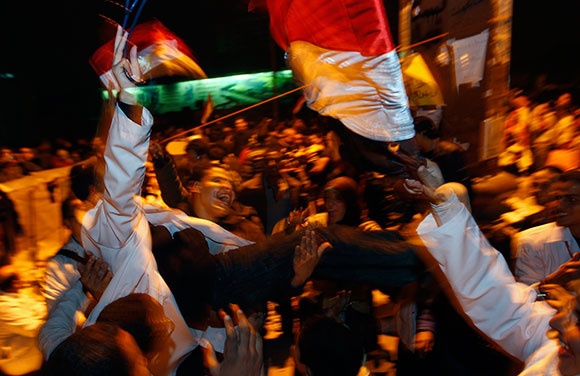 A field doctor is tossed in the air by anti-government protesters and colleagues in Tahrir square in Cairo. February 11, 2011. REUTERS/Yannis Behrakis

“I don’t want to idealize doctors. But I believe many acted out of conviction, the conviction to fight for human dignity. And, I suspect, many acted out of indignation: For decades, the government treats the poor like garbage, and now they’re after us? It may have been the last straw.”

First, Do Not Interfere

In Egypt, medical neutrality is being violated, and doctors aren’t taking it sitting down.

Dr. Alaa’ was an upper class Egyptian surgeon so sheltered from government corruption that he did not understand the simple mechanics of a street bribe. But he began to see the limits of his government, and its medicine, as he treated the poor in public hospitals in Cairo.

And then he lived those limits.

Dr. Alaa’s first child, a son named Muhammad, was born with a treatable heart condition. But because many of the country’s best doctors leave to practice abroad, not a single surgeon in Egypt was qualified to operate on the boy. And because he was breathing through a neonatal respirator, he could not fly. Dr. Alaa’ found a willing Saudi surgeon, who was traveling to Alexandria for another operation. Could he get Muhammad there from Cairo? Dr. Alaa’ could not find an ambulance equipped with a respirator available to take his boy.

The heart surgeon could not fix his own son’s heart.

And two weeks after his birth, Muhammad died.

That day, the hospital was quiet. No calls in or out. Dr. Alaa’s best friend arrived with the news: Tahrir Square was exploding. It was January 25, 2011, the day the Arab Spring arrived in Egypt. A defiant Dr. Alaa’ took to the Cairo streets.

Anthropologist Sherine Hamdy, assistant professor of anthropology at Brown and a faculty fellow at the Watson Institute, heard this story during a visit to Egypt in December 2011, a period of escalating military violence when even doctors were targets of government violence. These doctors were on her mind when she met Soha Bayoumi, a Harvard political scientist who came to Watson in November 2012 to participate on a panel about Our Bodies Belong to God, Hamdy’s book on medical ethics and Islam.

The two got talking. Why did hundreds of doctors — products of the Egyptian state and, in many cases, agents for it — defy their government and risk their lives to attend to protestors beaten, shot, and tortured during the uprising? And why did some even protest against the violence, dropping all semblance of political neutrality?

“This is such a different story for doctors in Egypt,” Hamdy explains. “Doctors are not always seen as good people in Egypt. Most are elitists, and some supported the state. So to see revolutionary doctors — like Che Guevara — come out of the uprising was notable.”

Hamdy and Bayoumi set to work. Conducting interviews on two Cairo trips, and researching press and human rights accounts, the collaborators investigated the ways that doctors become radicalized during the Egyptian Revolution.

Their findings: a sizable minority of doctors practiced medical neutrality as its own “potent and contested political stance” by caring for protestors in field hospitals and clinics. Some went even further, joining in the protests.

Hamdy and Bayoumi presented this work at a City University of New York workshop in February, and are planning a May symposium at Watson on doctors and political violence. Along with Watson postdoc Sa’ed Adel Atshan and Brown medical anthropologist Adia Benton, they’re inviting social scientists to discuss the conditions that promote — and undermine — medical neutrality during periods of political unrest.

Medical neutrality is the principle of noninterference with medical services in times of civil unrest. Doctors must be allowed to care for the sick and wounded, and soldiers and civilians alike must receive care regardless of their politics. Medical neutrality is rooted in the Hippocratic oath, and written into international humanitarian law.

“Yet medical neutrality has been violated around the world,” Hamdy says. “Understanding why has implications for global policy and humanitarian law.”

In the Egypt uprising, state security forces attacked and burned field clinics and confiscated medical supplies. They beat doctors, and, in some cases, tortured and killed them. Aya Kamal, one young doctor the team interviewed, was attacked and arrested by the military while caring for protestors in a Cairo field hospital.

“I still can’t believe I’ve seen these images in Egypt,” Kamal said. “I see these images in the West Bank or in a country stricken by civil war, but not in my country and at the hands of my own army.”

This witnessing galvanized some doctors, pushing them into field hospitals set up around Cairo’s hottest clash-points to treat the wounded, document injuries, and in a few cases, publicly denounce the government’s actions. They swelled the ranks of an existing group, Doctors Without Rights, which went on to hold a national doctor’s strike, and founded new groups, such as the nonprofit Tahrir Doctors, which provides first-aid to protestors.

Now that she and Bayoumi have identified these “doctors of the revolution,” they’re examining the personal motives and social and political conditions that brought them to the streets. Working with Physicians for Human Rights, the international NGO based in Cambridge, is high on their list.

“I don’t want to idealize doctors,” Hamdy says. “But I believe many acted out of conviction, the conviction to fight for human dignity. And, I suspect, many acted out of indignation: For decades, the government treats the poor like garbage, and now they’re after us? It may have been the last straw.”