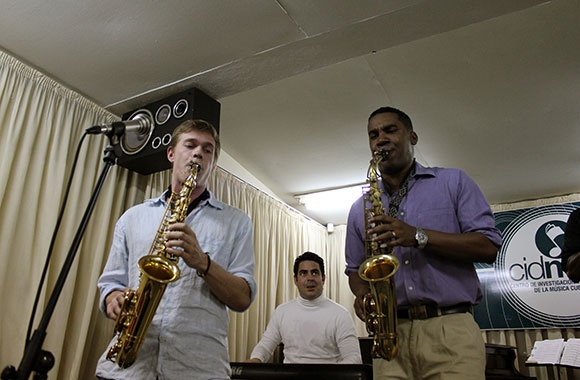 "There is a huge change about to happen. … This is not only an exciting time, but an important time to engage with Cuba.”

Richard Snyder, Director of the Center for Latin American and Caribbean Studies

"They're waiting for something."

Jazz and Exchange in Havana

In the heat of Old Havana, the Malecón — the seawall that stretches eight kilometers along the waterfront — becomes the city’s living room. At night, young Cubans flock to the wall by the thousands to catch the cool sea breeze, illuminated only by the headlights of passing cars in this city without streetlamps. Watching these young Habaneros last month, Richard Snyder, professor of political science and director of Watson’s Center for Latin American and Caribbean Studies (CLACS), was struck by the sight. "They’re waiting for something. There is a huge change about to happen. … This is not only an exciting time, but an important time to engage with Cuba.”

In early January, 14 members of the Brown University Jazz Band, along with the band’s director and a student documentarian, traveled to Havana for a week of musical and cultural exchange. Professor Snyder and Glenn Loury, a faculty fellow at Watson and professor of economics, accompanied the group, providing them with historical and political context. Although most travel between the United States and Cuba is restricted, the joint effort between CLACS and the Department of Music received special permission from the US Government.

On the first full day of the trip, the band traveled to Cuba’s National Music School to jam with its teenaged students.  “There were about forty Cuban students in the room,” remembers Snyder. “But then all these other students came to the window to peer in and watch this unusual event. … A Cuban student would pick up the guitar and play with [an American] bass player and vice-versa. It was a fluid, spontaneous exchange.” The Cuban students, who are on a path towards becoming state-sponsored professional musicians, were impressed that the Brown students could be such talented musicians while also studying and pursuing other passions. The Brown students, in turn, were amazed at the Cuban students’ knowledge of contemporary jazz as well as their tremendous abilities. “The Cubans have all of the traditional Latin rhythms in their blood. They just breathe it from birth,” says Sumner Becker, who plays the alto saxophone in Brown’s band. “They were technically so far superior to us in a rhythmic sense, but our comparative advantage was in our traditional swing. … When we collaborated it made both [groups] better.”

The jazz band’s trip is a part of a larger initiative by CLACS, the Watson Institute, and Brown University to build new bridges with Cuba. Since 2008, Brown has run a study abroad program in Cuba and will become one of the founding members of the new Consortium for Advanced Studies Abroad (CASA). CASA will coordinate close partnerships with Cuban universities as well as building a program house in Havana to support American students pursuing studies and research in Cuba. CLACS also sponsors programs that bring Cuban and Latin American scholars to Brown for collaborative research, as well as lectures and colloquia at the Watson Institute featuring a broad array of Cuban voices, from activists and artists to authors and economists. “It’s important to have a balanced approach,” says Snyder. “Not just academic, but cultural.”

The Brown Jazz Band’s trip culminated in a public concert in Havana at the headquarters of Casa de las Americas, an organization dedicated to improving cultural ties between the nations of the Americas.  The concert featured collaborations with local musicians playing both Cuban and American jazz, along with student-written compositions. A hundred people gathered in the audience, many of them the musicians, tour guides, and Cuban youth the band members had met on their journey.

In the 1920s and 30s, a ferry ran between New Orleans and Havana twice a day, carrying with it merchants, travelers, and of course, jazz musicians.  Over the past 54 years, exchange between Cuba and the US—both economic and cultural—has been cut off by the US embargo. Now, under President Obama’s leadership, this freeze is slowly loosening. It seems likely that Cuba will continue opening to Americans, and America to Cubans. But a common language—jazz—has been there all along.

A documentary of the trip, by Jordan Beard '15, will be screened at Watson on Saturday, April 5.