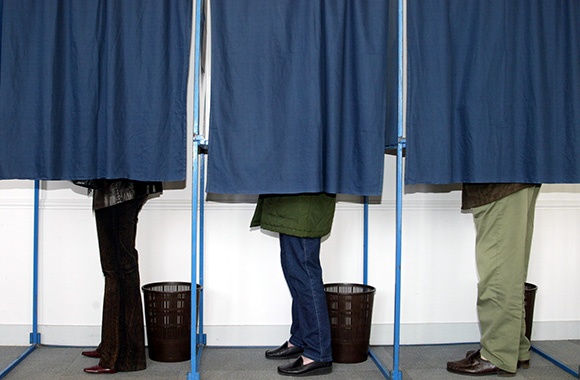 “What drives people, and what holds people, is the physical body. … We’re not disembodied. We’re not sticks with brains.”

On Nurture, Nature, Votes, and Parties

Rose McDermott is an unlikely academic.

Before the doctorate degree from Stanford, then the faculty appointments and fellowships at Cornell, Harvard, University of California, Santa Barbara, Stanford, and now at Brown, McDermott was a house painter, an auto mechanic, and, her favorite, a massage therapist. She once ran a heroin clinic in California.

On a recent visit to her book-lined office, McDermott, a Watson faculty fellow and Brown professor of political science, was trying to hang a ceramic moose head over the marble fireplace. It was a gag gift from a friend. McDermott recently received a Distinguished Scholar Award from the International Studies Association, which bestows the annual honor on foreign policy scholars for outstanding contributions to the field.

“The award is usually given to people who have done great things, but then they don’t do anything – they go up on the wall like this moose,” she said. She hooked a thumb, tipped in Day-glo orange, at her gag gift. “It’s hilarious.”

Challenging convention is McDermott’s hallmark since she arrived on campus five years ago. A professor of political science and a Watson Institute faculty fellow, McDermott is plowing a new and sometimes controversial field of research: the genetic basis of political behavior.

McDermott and a small group of peers aim to determine the role that genes play in influencing behavior – in this case, political behaviors such as casting votes, choosing parties, leading countries, amassing weapons, waging war.  An offshoot of behavior genetics, the field is intensely interdisciplinary, mining the intersection of genetics and political science and marrying the knowledge, tools, and research methods of both disciplines.

With degrees in political science and experimental psychology, she has spent her career studying mind and body, thought and instinct. How nature and nurture affect the mind and how the mind then translates thoughts, emotions, and in-the-moment experiences into political action are the fundamental questions that drive her.

“What drives people, and what holds people, is the physical body,” she said. “What is happening in the body, genetically or hormonally or emotionally, affects cognition. We’re not disembodied. We’re not sticks with brains.”

Her recent work, often with collaborator Peter Hatemi, an associate professor of political science, microbiology, and biochemistry at Penn State, has shown that biology does play a role in politics, individually and collectively.

McDermott and Hatemi edited a 2011 book, Man is by Nature a Political Animal, that traces through research and theory how evolution, genetics, primatology, neuroscience, and physiology can be used to understand political preferences. In just three years, they’ve also published together more than a dozen articles in peer-reviewed journals on topics that include hormones and aggression, the genetic roots of political violence, and gender and vote choice.

When they met in 2008, McDermott had submitted a paper to the Proceedings of the National Academies of Science.

The research showed for the first time that monoamine oxidase A, or the so-called “warrior gene,” directly influences aggressive behavior. In an experiment, McDermott and her team had 78 male subjects “earn” money by playing a game. An adversary then stole some of money. Sometimes it was a little, sometimes it was a lot. Subjects could simply take the money back and walk away, or punish the thief by paying someone to force them to drink hot sauce.

When the paper was in review, McDermott met Hatemi at a conference in Las Vegas. They had dinner. She drove him to the airport. Two weeks later, he called about collaborating.

“We have a mutual fascination with the biological underpinnings of political behavior,” she said. “We have similar work styles and similar values. It’s been a great partnership.”

The pair has now written a forthcoming paper on the subject of voice and smell, and how these cues can predict attraction between liberals and conservatives. (Spoiler: Subjects could hear and smell ideological difference, and they like their own kind).

McDermott spent much of her early career studying gender differences, and how they influence political decision-making, particularly in situations of conflict and crisis. This work led her to study the effects of testosterone, which brought her to biology.

She believes the nature vs. nurture debate that long dominated science is proving simplistic. “Our DNA isn’t our destiny. And we don’t just act based on our developmental patterns or our social environment or our hormones. They’re all important. Finding out how, and when, and why is the fun.”