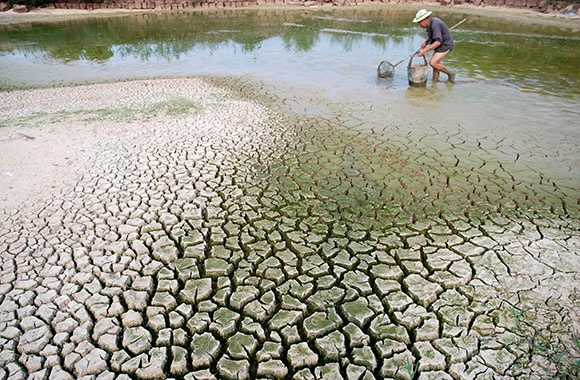 A villager walks through a partially dried reservoir in Yingtan, Jiangxi province. REUTERS

"Everything is at stake: the direction of multinational economic development and whether we’re going to have a livable planet.”

Our planet is warming, the seas are rising, the weather is more savage and unpredictable. Beyond a doubt, science shows that the climate is changing and the changes are human-generated. Yet 17 years after the Kyoto Protocol, there is no new global climate change action plan.

Poor countries don’t trust wealthy nations to keep their promises about reducing carbon emissions and increasing foreign aid. At the same time, wealthy countries don’t always trust poorer ones with that aid. The money, some mutter, will be wasted.

"Everything is at stake,” says Roberts, a Watson faculty fellow and Brown’s Ittleson Professor of Sociology and Environmental Studies, “the direction of multinational economic development and whether we’re going to have a livable planet.”

To build trust, Roberts wants to get both sides talking, and working, together.

So with members of his Climate and Development Lab, who provide research support to the world’s 49 least developed nations, and with support from the Center for Latin American and Carbibbean Studies and the Office of the President, Roberts is organizing an April conference at the Watson Institute that will bring together climate experts from the wealthy Global North with those from the poorer Global South to discuss climate action and finance, with an emphasis on Latin America’s role as climate change leader.

More than a dozen environmental ministers, climate negotiators, researchers, and activists from the United States and the United Kingdom, as well as from Peru, Mexico, Brazil, Bolivia, Chile, and Panama, are invited to meet for two days to discuss fresh ways to move forward on reducing emissions and improving the system of climate aid, which has a major impact on how developing countries can adapt to climate change and blunt its future effects.

Christiana Figueres of Costa Rica, one of the world’s most influential climate change leaders and the executive secretary of the United Nations Climate Change Secretariat, will deliver a video message to the group.

Figueres is president of the annual United Nations Climate Change Conference, also known as the Conference of the Parties, or COP. For the last three years, Roberts has traveled with Brown undergraduate and graduate students to the COP talks to see global climate negotiations first-hand. Held in Cancun in 2010, Durban in 2011, and, last year in Warsaw, the COP is the leading UN body made up of representatives of the 195 Kyoto Protocol countries, which are legally bound to reduce greenhouse gas emissions.

At the Watson conference, Roberts sees a critical opportunity for collaboration. In 2015, the COP will gather in Paris, where representatives are expected to finalize a universal climate agreement. If it happens, it will mark the first time in over 20 years of UN negotiations that all the nations of the world, including the biggest emitters of greenhouse gases, will be bound by an agreement to reduce their emissions.

“We want to help the movement and help build that trust,” Roberts said. “One way you do that is get folks to talk with each other — outside of the talks.”

A central issue at the Watson conference, in the global climate policy community, and in Roberts’s work over the past decade, is how to best create an equitable and accountable system of climate finance.

At stake are billions of aid dollars pledged each year by developed countries to compensate for past and future climate damage, and to encourage developing countries to reduce their carbon emissions in an effort to reduce future damage. This arrangement is bluntly referred to as “the polluter pays principle.”

But with such enormous complexity in the economic, diplomatic, and scientific issues surrounding development assistance, it is difficult to tell what is pledged, what is actually paid, and how money is spent.

In an effort to increase transparency in climate finance specifically, and foreign aid broadly, Roberts co-founded AidData.org, now a partnership of more than 50 universities and think tanks worldwide that makes data on international development more accessible and usable for everyone. AidData, and the Climate and Development Lab at Brown, have produced a raft of policy briefs, original research, and hands-on policy training.

Building trust and creating partnerships are the threads that run through Roberts’s work — not only at the global scale, but also locally.

“We got the balloon off the ground, and now we will see how far it will fly,” Roberts says. “I’m cautiously optimistic. But I’m a dreamer. What can I say?”