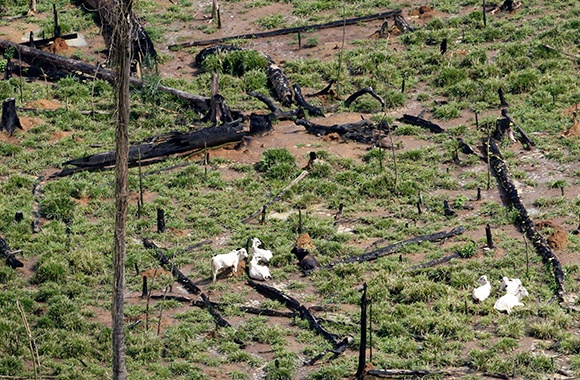 “The governmental, NGO, and academic experts who will be here to debate this issue is truly extraordinary. I expect specialists from around the world will be paying close attention."

Why We Should Care About Brazil's Development Policies

Brazil is big. Very big. It is the fourth-largest democracy and the fifth-largest country in the world. So how this South American giant manages its vast territory has big implications. Brazil’s policies toward such issues as deforestation, industrial agriculture, and land use change will have repercussions for the entire planet – the Amazon rainforest, for example, affects world climate and the circulation of ocean currents – and could serve as a model of governance and policymaking for other countries.

To inform the discussion of such policies, Brown University will convene an international symposium, Brazil’s Approach to Low Carbon Sustainable Development, on April 17 and 18.

According to lead organizer Leah VanWey, a Watson faculty fellow and an associate professor of sociology, this symposium is the first of its kind because “we’re bringing together people who are top-flight scientists in the natural sciences and the social sciences, and people in the government who are actually making policy.”

Social scientists are key to any discussion of policy, VanWey says, because they bring “an understanding of human behavior and human decision making. For example, when you think about how to get people to leave forests standing or plant new trees, [social scientists] have a richer understanding of the range of human activities – and the context of their entire lives – and what incentives you need to design to get the behavior you want. They understand how everything moves through the economy, social networks, and social connections.”

The symposium will include faculty from Brown, as well as 27 experts from government, universities, and NGOs across Brazil and from universities in the US and Canada. And they won’t all agree.

“One of the big divisions in Brazilian politics is between the rural bloc that is pro-big-agriculture and pro-big-development, and the more traditional leftist bloc that is about small farmers, capacity building, focusing on developing small-holder agriculture and family agriculture,” explains VanWey. She finds these differences not only exciting, but promising in the quest for new ways of approaching urgent questions.

"I’ll be chairing a panel discussion on the topic of whether Brazil has been a leader or a spoiler in the UN climate change negotiations,” he says. “Behind that provocative question is our desire to understand what is driving Brazil's sometimes contrarian positions in the talks, and whether it can deliver a truly ambitious pledge in the Paris round of negotiations going on this year.”

For VanWey, the symposium will be a success “if we have heated debate and respectful discussion but no one shuts down.”

In Brazil, science informs policy more than in the US. But that means science is very political, especially the science around deforestation and climate change. VanWey sees this event – which will be livestreamed – as a neutral forum, “so it’s not any scientist pushing his or her political agenda, it’s not a politician pushing a particular agenda, it’s a place where the science can be discussed and evaluated, where it can inform political decisions.”

“The governmental, NGO, and academic experts who will be here to debate this issue is truly extraordinary. I expect specialists from around the world will be paying close attention,” says Roberts.

"This is an example of how Brown University has become an important research hub for exciting collaborative research projects between our faculty and leading Brazilian scientists and social scientists,” says James N. Green, director of the Brazil Initiative.

VanWey, who is also senior deputy director of the Institute at Brown for Environment and Society (IBES), agrees. The Brazil Initiative aims “to make Brown a place where everyone can come – anybody from any political view – because we’re really interested in a constructive dialogue about the future of Brazil. I see this conference fitting within that larger goal.”

The conference is sponsored by the Brazil Initiative, IBES, the Botin Foundation, Brown’s Office of Global Engagement, the Center for Latin American and Carribean Studies, the Department of Portuguese and Brazilian Studies, FAPESP, and the Watson Institute.