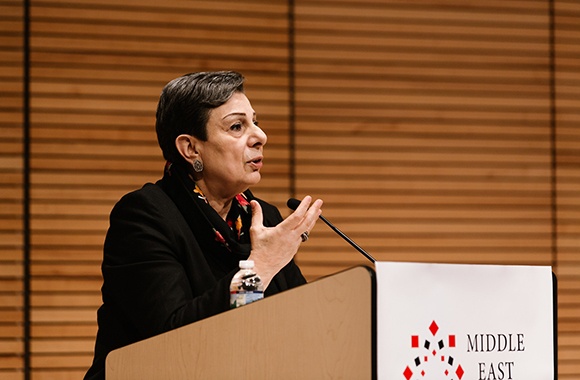 "Palestine has never been an isolated issue. It has always been influenced by external powers.”

Critical Conversations on Israel and Palestine: What Is To Be Done?

“The current government of Israel is leading the country in a very dangerous direction—one that threatens the long-term existence of the state.”

This sentiment, expressed by Stephen Robert ’62, echoed throughout much of the evening. On March 5th, the fourth in a series of panel discussions entitled “After Oslo: Critical Conversations on Israel/Palestine” took place in Brown’s Granoff Center, organized by Middle East Studies and co-sponsored by the Watson Institute.

Dr. Beshara Doumani, director of Middle East Studies at Brown University, moderated the discussion with Dr. Hanan Ashrawi, a member of the executive Committee of the PLO and civil society activist; Stephen Robert ’62, Chancellor Emeritus of Brown University and chairman of the Source of Hope Foundation; and Hani Masri, Director General of the Palestinian Center for Policy Research and Strategic Studies.

Ashrawi, who spoke first, established Palestine’s position relative to other regional powers as the weakest component of the conflict. “Palestine has never been an isolated issue,” she said. “It has always been influenced by external powers.”

The source of conflict, she explained, stems from Israel’s occupation of Palestinian territory. She cited specific violations of civil and international law, including the indiscriminate detainment of Palestinians, withholding of Palestinian funding, and restrictions on mobility and trade.

Ashrawi, an activist, scholar and a leading negotiator and legislator, lamented the introduction of ideology into negotiations, which she believes hinders productive dialogue.

“There is this idea of making people accept the Jewishness of the state [of Israel],” she said, referring to a recent bill proposed in the Israeli parliament that would codify the State of Israel as a Jewish state, which many argue further solidifies the oppression of Arab peoples living in Israel.

Ashrawi outlined multiple possible futures for the regional conflict, the best of which involves multilateralism and Palestinian institutional development. For Ashrawi, success does not mean simply conferring UN membership and statehood upon Palestine, but rather building internal political mechanisms capable of supporting the state after Israel’s civil and military withdrawal.

Stephen Robert ’62, who spoke next, criticized the right-wing Netanyahu government, asserting that Israel has become “an apartheid state.”

Robert invoked the UN’s specific definition of apartheid—a system where “one institutionalized racial group deprives another racial group of their rights.” He cited Palestinians’ inability to receive secondary and tertiary medical care, restrictions on freedom of movement, and arbitrary arrest.

Robert, a self-described Jewish “pro-Israel, anti-Netanyahu,” concerned activist, said, “That fits like a glove to the definition of apartheid.”

Robert explained the Palestinians are unlikely to accept further territorial concessions not because they are resistant to the peace process, but because they are starting from an initially compromised position.

The United Nations Partition Plan for Palestine, a failed 1947 initiative that would have given Palestine 45 percent of divisible land, eventually became 22 percent in the pre-1967 border agreement accepted by many PLO members. Some Israeli politicians, including Israeli Economics Minister Naftali Bennet, seek the annexation of Area C—currently under full Israeli civil and security control—which would leave the Palestinian people with roughly 9 percent of their land, said Robert.

“An Israeli administration that will seriously negotiate peace,” he said, would allow the full educational and labor potential of the Palestinian people to be reached, and Israel—instead of being a “pariah”—would become the democratic Jewish state with international acceptance it once was.

Robert and Ashrawi also acknowledged that some public figures are actively working to mitigate conflict and promote realistic solutions.

Hani Masri, using stronger language than either Ashrawi or Robert, continually asserted the need to shift the “balance of power” away from Israel, a regional hegemon. He said that the Palestinians needed to resist the “colonial settler project” currently imposing on Palestinian land.

Stressing the importance of institution building and political unification within the PLO and PA, he said that factions could unite behind their shared experiences, history, and current disenfranchisement. “Without unity, without national institution[s], and without one leadership, we can’t reach any of our goals,” he added.

During the Q&A session, one audience member took issue with Robert’s characterization of Israel as historically democratic, and challenged the notion that a two state solution was the most just option.

Robert agreed that there had been atrocities, including “ethnic cleansing,” that took place in 1948, but said, “We can’t go back in time. We can’t make a better past. A lot of horrible things happened in this battle. With regard to the one-state solution, I have to balance what each side wants with a solution that will be at least acceptable, and will give the Palestinians back the civil rights which they’re entitled to.”

When asked about the PA’s recent decision to end security coordination with Israel, Ashrawi explained that although the United States and Israel do not support the policy, allowing Palestinian forces to control their own territory would confer a measure of legitimacy on the PA and promote stability.

Dr. Doumani concluded the discussion praising the panelists and attendees for “speaking from the heart” to encourage productive dialogue around such personal and sensitive issues.