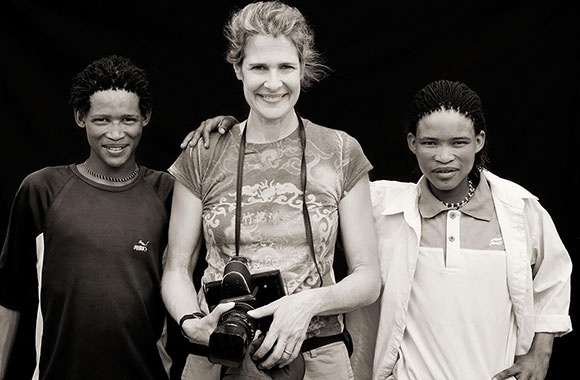 "Humanity’s survival depends on how carefully we listen."

Thinking about the Seventh Generation

On September 10 and 11, photographer Dana Gluckstein will give an artist talk and moderate a panel on art and activism. Her show, DIGNITY: Tribes in Transition, consists of 60 portraits of Indigenous Peoples from across the world.

W: How many years did it take to produce this body of work?

DG: After I graduated Stanford University in 1979, I began a career in commercial advertising photography in San Francisco. Sometimes I would be sent to shoot campaigns overseas. This sparked my lifetime calling to portrait Indigenous Peoples fighting for their lands, culture, traditions, languages, and their very lives. The portrait journeys became imperative even while I juggled my career. Over time, museum curators began to collect the work. In 2010, DIGNITY: In Honor of Indigenous Peoples, with a foreword by Archbishop Desmond Tutu and an introduction by the revered Native American leader Faithkeeper Oren S. Lyons, was published in association with Amnesty International for their 50th anniversary.

W: You have characterized yourself as a “creative activist.” What do you mean by that?

DG: I believe art can impact the state of the world. In 2013, I was invited to address the World Economic Forum in Davos, Switzerland, and spoke on this topic. I believe the DIGNITY book, in association with Amnesty International, helped create the “tipping point” for President Obama to adopt the United Nations Declaration on the Rights of Indigenous Peoples in December 2010, which our country, along with Australia, Canada, and New Zealand, had vetoed in 2007. During the press campaign, when the book was released, I urged people to sign the Amnesty International letter to Obama requesting our administration to adopt the UN declaration immediately. Thousands of people wrote letters. The US was the last country to adopt, and we celebrated this historic victory.

DG: The Ancient Ones tell us where we have come from and where we must go as a world community. Humanity’s survival depends on how carefully we listen. It is my belief that Indigenous Peoples hold essential wisdom for our planet and that most will vanish within the next 10 years unless the world takes urgent action. Many people in highly developed countries desire a connection to the timeless knowledge and beauty of these ancient cultures. The Ancient Ones represent “the canary in the coal mine,” demanding that we take critical steps toward survival or we will all perish. My own intention and sincere wish as the photographer is that these images of ancient wisdom-keepers give voice to their cultures and serve as a beacon of light to guide the world in its quest for survival.

W: You say that the world's future – our future – depends on the wisdom of the elders, on exchange and authenticity. How optimistic are you that this wisdom will inform our future?

DG: The teachings of Faithkeeper Oren R. Lyons of the Turtle Clan, Onondaga Nation Council of Chiefs, about the Onondaga Nation's Great Peacemaker give insight for the future of the world. “When you sit in council for the welfare of the people, think not of yourself, nor of your family, or even your generation. Make your decisions for the seventh generation coming so that they may enjoy what you have here today. If you do this, there will be peace.” That is a profound instruction on responsibility that should be the basis for the world’s decision makers today. This critical paradigm shift of considering the welfare of the seventh generation rather than what is best for the welfare of the corporation is being adopted by some world leaders. For example, Chancellor Merkel of Germany is leading the world by closing down their nuclear power plants by 2022 and has been moving toward renewable energy for some time now. Yes, I am optimistic! But we must continue to push our leaders to make decisions for the future well being of the planet.

W: You have described this project as your own “pursuit of justice.” How so?

DG: As a Jewish woman with family members who died in the Holocaust and with survivors still alive to share their history at our Passover table each year, I feel a profound connection to other cultures that have faced persecution and are displaced from their homelands. In fact, DIGNTY was published in a German-language edition. I had the extraordinary opportunity to travel to museum openings in Germany and speak to diverse audiences and the media about cross-cultural issues of reconciliation and healing.

W: DIGNITY is a call to action in support of Indigenous Peoples. What action can people take after seeing the exhibition or buying the book?

DG: Currently I am working with Amnesty International USA on a campaign to end discrimination and sexual assaults of Native American women and Alaskan Native women. I speak about this issue at the museum openings, lectures, and to the media. I address the issues of campus rape and rape in the military to the plight of our sisters on reservations.

People can take immediate action by signing the Amnesty International letter to President Obama urging him to enforce the Indian Health Services to implement Standardized Sexual Assault Protocols, adopted in the US Tribal Law and Order Act passed in 2010. Tragically, law enforcement and justice systems still fail to ensure justice for Indigenous survivors of sexual violence – their cases are often not investigated, vital evidence is not always collected and not all cases are prosecuted. More than one in three Native American women will be raped during their lifetimes. To take action, visit www.amnestyusa.org/indigenousrapecare.