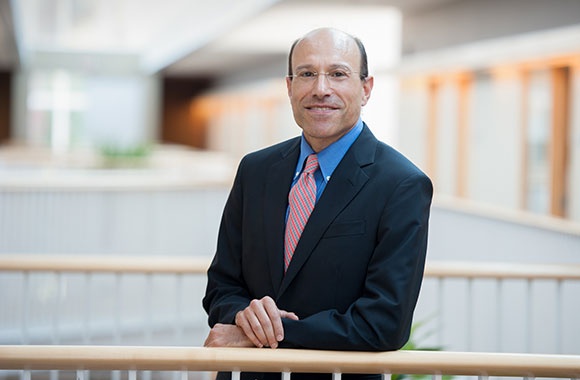 "I wanted to work with scholars who are interested in studying China not just to learn something about China per se, but who believe that China should be studied comparatively and that perhaps we can better understand ourselves by learning things from China."

The China Initiative Creates a Community

In July 2013, Edward Steinfeld left MIT to join Brown’s Department of Political Science. He holds the Dean's Chair in China Studies and is a faculty fellow at the Watson Institute. He is also the founding director of the China Initiative. We sat down with him for a progress check.

W: You’ve done a lot in less than two years. What are you most proud of so far?

ES: I came to Brown because I really wanted to be involved with a community of like-minded scholars. Not like-minded in the sense of having the same view of the world, but in the sense of being interested in doing collaborative, interdisciplinary research with clear applications to problems in the world. I wanted to work with scholars who are interested in studying China not just to learn something about China per se, but who believe that China should be studied comparatively and that perhaps we can better understand ourselves by learning things from China. I wanted to be involved in building that, and I’m proud to say we really have that kind of community at Brown.

One example of this is the Gilded Ages Workshop here at Watson, which is trying to understand rapid urbanization and industrial development as a phenomenon that’s happened historically – in the US in the late 19th and early 20th centuries, in Germany in the late 19th century, in India today, and in China, today. [Public Policy Program Director] Jim Morone, [Brown-India Initiative Director] Ashutosh Varshney, and I started the workshop. We think there’s an interesting set of issues there, and we’re trying to get a group of people together from different regional perspectives, and from different pieces of the social sciences, in a room to start a discussion. We hope and trust that this discussion will lead to new books, new classes, and new lenses for understanding the challenges of our time.

Another example: there are a number of leading epidemiologists in the School of Public Health who study the health consequences of environmental pollutants – a huge issue in China. These people wanted to start doing some fieldwork there … so we started collaborating with them, too. These are brilliant experts I might never have talked to had it not been for this collaboration!

On the engineering side, [former Dean of Engineering] Clyde Briant reached out to me, asked me to give a talk, and now we’re doing collaborative research and teaching on industrial development and technology innovation!

I’m particularly happy to have the China Initiative support the work of postdocs. Last year a postdoc in sociology and one at the Institute at Brown for Environmental Sciences came to me and said they wanted to produce an edited volume on the impact of urbanization on Chinese rural locales. So we funded a two-day conference and workshop, and all of the chapter writers came.  It was a great event that involved intellectual content, a public aspect, and, eventually, an edited volume.

And finally, we created the China Collaboration Grants, and this year awarded six grants to Brown faculty doing China-related work in a variety of areas – anthropology, history, literature, and more..

Being part of a community like this is exactly what I came here for.

W: What makes the China Initiative different from other China programs?

ES: I’ve been in academia long enough to know that everybody talks about doing interdisciplinary work. In most places, though, actually doing such work, or even finding a group of people seriously willing to challenge traditional disciplinary boundaries, is tough. But here it’s been pretty easy. People here are very open to cross-disciplinary work, especially if it’s tied to real-world problems and research that’s solution oriented. And that’s very refreshing. I don’t think it’s that common in academia.

Because we don’t have a huge number of people working on contemporary China here, I thought we should foster research – not just events or conferences – in areas in which Brown faculty are already doing work, especially when those areas overlap with Watson’s focus on sustainable development. My own work is mostly on industrial upgrading and technology innovation, particularly for environmental applications, and there are people in engineering here who are working on that. And then in public health we had an identifiable cluster, and there are two other areas where we’re up and running – urbanization and urban planning, with people like [sociologist] John Logan, and labor standards, with [Watson Director] Rick Locke and others. In those four areas we knew we could get things up and running from the get-go. We’ll build out from there.

W: You’ve said you want the China Initiative to a bi-directional endeavor, where we’re learning not only about China but from China. So what are we learning?

ES: When we talk about industrial issues with China, the public perception is one of competition, trade tensions, and IP theft, even in areas where we have collective interests, like the environment. And even in areas where we should arguably be arguably be pleased when we see Chinese producers lowering the price of solar panels and wind turbines. But the inclination is to say there’s something unfair about this, that the Chinese are doing something in a competitive way that’s hurting us as producers. In my research, we find increasingly that when it comes to solar cells and wind turbines, there’s real China-based innovation behind those price reductions. In China, there’s innovation surrounding new ways to design products, new ways to simplify products, new ways to scale manufacturing, new ways for governments to encourage that, new ways for universities to train engineers to think in those terms. There’s real knowledge there. We can argue about subsidies, we can argue about trade – and we should – but there’s something real that’s been created and we need to learn from that.

Here’s an example. A European company that makes high-end precision equipment for food applications dominates the market. But then, suddenly, a number of Chinese companies begin producing similar equipment at very, very low cost. The reaction could be to say, “They’re cheating, they’re stealing.” But this European company looks at the equipment and says, “That’s pretty good equipment. It’s designed in way we wouldn’t have thought of. It’s simplified, it’s pretty high quality, it’s much cheaper to manufacture. And it’s created an entire market among industrial customers that couldn’t previously afford this equipment..” So the company buys one of the local Chinese firms. The company says, “Rather than figuring out how to fight this competition, how do we learn from it? How do we absorb that knowledge?” This has ramifications for all of us, too, because this food processing equipment is very important for identifying and sorting out toxins, sorting out impurities. There are health issues, and as that equipment proliferates we’re all better off.

When I think about multidirectional learning, it’s simply recognizing different ways of organizing society, different ways of organizing politics. We don’t have to like it. Maybe we should expressly complain about the things that are offensive to our values. But at the same time we shouldn’t blind ourselves to the reality that there’s real knowledge in China, and we ignore it at our own expense.

W: What do you hope to do that you haven’t done yet?

ES: I really want to build the postdoctoral program. I think it’s so important to bring in young scholars. They’re just at the cusp of breaking out in their academic careers, they’re usually much more methodically tooled up than those of us who’ve been around longer, and they’re fresh from the field, so they know a lot more. I want to bring in more Chinese scholars to that program and also make it more interdisciplinary, moving beyond the social sciences to include the technical sciences, like engineering, health. One of the goals of the postdoc program is to create constellations of people who are doing things in a common area, and hopefully you get a whole that is greater than the sum of its parts.

I would also like to have more faculty. We don’t have to do everything in house, we want to be a node in a network. That means doing research collaboratively with other institutions in the US, Europe, and China. But we do need more people in house, faculty anchored in a department but with an appointment at Watson.

As for research, I want output – articles or edited volumes, books, journalistic pieces. It doesn’t have to be academic, but something where we can say, “Here is a product that people can go back to and look at and learn from over the longer term.” We have already generated content in our four research areas. I want to see more.  Whenever we have a conference, if at all possible I want something produced from that event – working papers, policy papers.

I also want to create a visiting scholars program that brings practitioners – policymakers, business people, social entrepreneurs – to Watson. We would bring people here for a semester, maybe a year, people who’ve dealt with the issues in our four core research areas, but in a much more applied way. I really think if we can get the right people here they’ll help us learn and teach.

W: What are you most excited about right now?

ES: Well, last week we had Li Yinhe, a Chinese sociologist. There is a social ferment in China – a way that they’re thinking about themselves, their identity, and how they interact – that’s very open ended, and it’s changing rapidly. Her work happens to be on sexuality and sexual preference, and she’s pushing an agenda for same-sex marriage rights in China. There’s this whole reexamination of values in a very open way, and this particular public intellectual is right in the middle of it. She’s combined her academic work with her societal work. I think that’s very cool. Whatever we think of a particular issue, it’s important for the community interact with people like that.  We haven’t exactly resolved these issues of sexual preference, of dignity, and so while we’re wrestling with this here, to see somebody wrestling with it in China is, I think, illuminating.

I’m also very excited about the upcoming forum jointly sponsored by Watson and the School of Public Health. We’ll have a series of guests from Chinese governmental agencies that do health care and public policies surrounding health care, including the Chinese CDC. The Chinese officials are under huge political pressure to deliver solutions to environmental problems. They want to do studies. Collaborations hard and it requires a lot of communication and face time.  Scholars and policy makers will do public presentations, but the real point is to meet faculty at Watson and the School of Public Health and continue to think about how we can do collaborative research. There’ll be follow-on workshop in Xian in June, and they’re already four studies that we want to scale up.

And then we have these postdocs, who are amazing, and undergraduates who are totally motivated … I’m having more fun teaching than I’ve ever had in my life.

Got a minute? Meet Professor Steinfeld and hear what else he’s excited about at Brown: