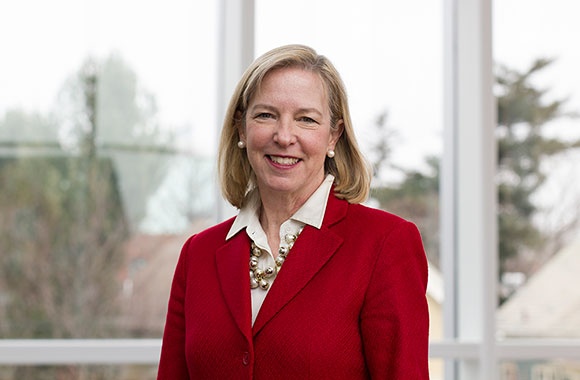 "I can’t say enough about how challenging and rewarding the work is. There’s never a day when there aren’t a lot of things breaking because you have to be working with policy in very time-sensitive environments."

The Importance of Communications in Effecting Real Change

This is about as hands-on as it gets.

In Elizabeth Burke Bryant’s class Strategic Communication, students choose an issue that’s making its way through the Rhode Island State House, learn everything they can about it, and prepare testimony. Then, in a State House hearing room, “students sign in and testify exactly like it’s a regular hearing” says Bryant. She always takes the role of committee chairwoman, while students pretend to be senators and the clerk of the committee. The whole thing is “captured on television by Capitol TV.” Students’ testimony is immediately critiqued by Bryant, and they end up with a disc of all the testimony to review later. “The copy of their testimony gives them a self-improvement tool,” she says, “because instead of imagining how they come across, they can actually see it on television. They all tell me that ‘it’s so much better to have this experience in class.’ I’m instituting more speaking experiences and you can just see the confidence build.”

The Watson adjunct lecturer, who is also the Executive Director of the research and advocacy nonprofit Rhode Island KIDS COUNT, describes it as the “Get to Yes” class because she believes that communications for policy change happens on multiple levels. “Sometimes it’s one elevator conversation with a Speaker of the House whom you happen to be in an elevator with, and you have to be able to communicate what your policy issue is very, very quickly,” she says. “Another time it might be a speech before 400 people; another time it might be a public affairs ad campaign.” Because many of her public policy students will end up working in government or nonprofit organizations, Bryant focuses on the whole spectrum of communications tools, including op-ed pieces, letters to the editor, websites, and all-important social media, encouraging students to develop a communications portfolio for job hunting. Guest speakers in the class, including members of the media, elected officials, and a social media expert, offer their own perspectives on effective communications.

Rhode Island KIDS COUNT started in 1994 out of a need for more data on kids’ issues, and Bryant has been its Executive Director from the beginning. At that time, pre-Internet, Rhode Island KIDS COUNT partnered with the Taubman Center, which had a close connection to the Census Bureau. “I’m very proud of that original partnership we had in the early days when we really needed that data capacity,” she says. “Of course, as the years went by we became self-sufficient in terms of our data work but we have remained a very close partner of Brown University ever since.”

The data coalesces each year in a “huge undertaking:” the Rhode Island KIDS COUNT Factbook, which has mushroomed over the years from presenting 22 indicators of child well-being in 1995 to 69 indicators today. These cut across family and community; education, economic well-being, safety, and health. “It’s just one small part of what we do but it’s a very significant part,” Bryant says, “because it’s our foundation for how we can be a credible advocate for kids.” The Factbook is released each year in early April at a breakfast for more than 600 people, including the state’s top elected officials, which is “very symbolic because we’re literally putting the information in their hands.” The numbers tell an important story. “Rather than anecdotal information,” she says, “we present real trend lines on what’s happening to kids and present a full picture.” With a current staff of ten, a large part of the work is “research into what works to turn the numbers in the right direction.”

Bryant grew up in Rhode Island and studied political science at the University of Vermont. After college, she moved to Washington, D.C., where she worked for a few years before attending law school at George Washington University. Her first job upon returning to Rhode Island was in the Department of Public Safety. “It was a great bird’s-eye view of the way a city police department, fire department, and communications operation work,” she says, “so I think that got some of my interest in juvenile justice issues going.” But what cemented her interest in kids’ issues, she says, was her next job, appointed by the mayor, as a prosecutor in the new Housing Court in Providence, where she prosecuted slumlords and people with housing code violations. Subsequently, the mayor appointed her policy director for the City of Providence, where she “did a lot of the work in bringing partners together and really trying to move some issues forward.”

Some of the work she’s most proud of at Rhode Island KIDS COUNT is helping to overturn a law requiring 17-year-olds to be part of the adult criminal justice system (“That was a very important victory because of all that it meant for the futures of those young people,” she says); advocating for a strong state-funded pre-Kindergarten program (“We really helped to do the research and make the case that we can’t wait until Kindergarten for formal education to start in our state); and pushing for high-quality health insurance coverage, which 97 percent of Rhode Island children now have.

“I can’t say enough about how challenging and rewarding the work is,” says Bryant. “There’s never a day when there aren’t a lot of things breaking because you have to be working with policy in very time-sensitive environments.” For students who want to be right in the thick of it, Rhode Island KIDS COUNT has a “very robust” internship program. “We are so grateful for our interns,” she says. “We think they learn a lot here, too. Our policy is ‘Jump in. Jump in and really feel like you’re part of a team in a very active nonprofit.’”