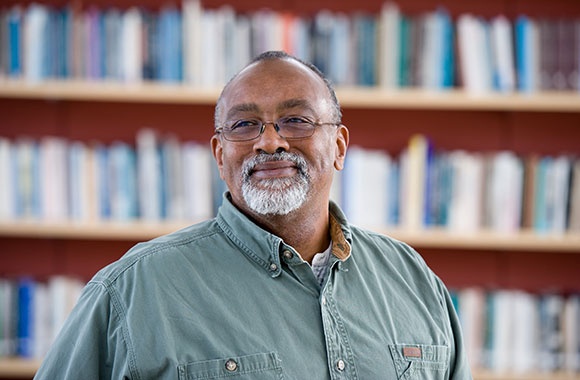 "[We must] argue this as a principled matter. This is not a way to conduct ourselves. Yes, a person may have offended but it’s up to us how we react to that. Incarceration didn’t use to be the automatic response."

Criminal Injustice: Mass Incarceration in the Land of the Free

“Cautiously optimistic.” That’s how economist Glenn Loury describes his perspective on the future of incarceration in America.

Both words are apt.

“Optimistic,” because for the first time in years the number of both prisoners and prosecutions is down. And “cautiously," because the proportions of the problem are titanic. At almost 2.3 million, the US prison population is the world’s largest – 5 to 10 times higher (as a fraction of the total population) than those in other democracies. Nearly one out of every 100 adults in this country is in prison or jail.

Loury, a faculty fellow at Watson and Merton P. Stoltz Professor of the Social Sciences, is a member of the National Research Council’s Committee on the Causes and Consequences of High Rates of Incarceration in the United States. With support from the National Institute of Justice and the John D. and Catherine T. MacArthur Foundation, the committee last year published The Growth of Incarceration in the United States: Exploring Causes and Consequences.

The 400-plus-page report documents the vertiginous rise in America’s penal population over the past four decades and the ruinous toll mass incarceration is taking on individuals, families, communities – not to mention state and federal budgets (in 2010, corrections expenditures alone were $80 billion). The report concludes that we have “gone past the point where the numbers of people in prison can be justified by social benefits.”

That Loury was a member of the committee is no accident. A prominent public intellectual and social critic, he is an expert on racial inequality in America. In 2007, when he was invited to deliver the Tanner Lectures on Human Values at Stanford, he considered possible topics.

“I decided I wanted to address myself to the question of race, incarceration, and American values,” Loury recalls. “I acquainted myself in a deep way with the facts, the trends, the nature of imprisonment, the use of solitary confinement, capital punishment, the length of sentences as compared to other countries, and the extent to which the social science literature could determine what effects these high rates of incarceration are having on crime rates, on populations.” A monograph of the lectures was later published by MIT Press.

Loury was especially interested in the high degree of inequality of incidence of incarceration by race. Indeed, while one in six Americans is black or Hispanic, one in three prisoners is black or Hispanic. “A young black man is six or seven times more likely to spend time in prison than a young white man,” says Loury. In fact, male African American high school dropouts have a higher chance of being in prison than of being employed.

The consequences are devastating and far-reaching. One child in 28 has a parent in prison. Millions of people are unable to find a job or housing. And they are largely disenfranchised: an estimated 5.8 million Americans cannot vote because of a felony conviction.

How did we get here?

In addition to Nixon’s 1971 declaration of the “war on drugs,” Loury points to the 1974 publication of an article by sociologist Robert Martinson in the conservative magazine The Public Interest that summarizes the findings of a survey of 231 studies of prison rehabilitative programs. The essay, titled “What Works?” gave rise to the “nothing works” doctrine of prison reform. At that point, says Loury, “rehabilitation was out and retribution was in – with a vengeance.” There followed a steady shift toward harsher penal policies throughout the 1980s and 1990s.

Where ALEC Meets the ACLU

Perhaps surprisingly, the drive against mass incarceration and for criminal justice reform spans the political spectrum. Last March, more than 600 lawmakers and influencers gathered for a daylong Bipartisan Summit on Criminal Justice Reform. The event was produced by Newt and Callista Gingrich’s Gingrich Productions and by #cut50, an initiative of Van Jones’s Dream Corps Unlimited that aims to reduce the incarcerated population by 50 percent over the next 10 years.

Speakers such as Attorney General Eric Holder, New Jersey Senator Cory Booker, AFL-CIO executive vice president Tefere Gebre were joined by three Republican governors, as well as by Mark Holden, senior vice president of Koch Industries, a known supporter of right-wing causes. In an interview leading up to the summit, Holden, who worked as a jail guard in Worcester during college, said, “Libertarians want to remove boundaries to opportunity for disadvantaged people. … People who make mistakes, let’s not write them off forever. Let’s give them a chance to reintegrate society.”

Loury was a panelist at the summit, and then in May traveled to Washington, DC, to discuss findings from the report with staff members from the US House Judiciary Committee. This kind of outreach is part of the committee’s efforts to maximize impact of the report among critical decision makers and stakeholders and in the press. And the topic is getting a lot of ink, including in the New York Times Magazine, the Washington Post, the New Yorker, and even The Sun.

For Loury, mass incarceration as social policy is one of the most salient ethical issues Americans face today.

“My view is you have to argue this case on its ethical merits. In other words, Yes, it’s about them, but it’s also partially about us. We are a nation of jailors. … We have more people as a percentage of our population in prison for life, without the possibility of parole, than the Swedes have in prison for anything for any length of time. [We must] argue this as a principled matter. This is not a way to conduct ourselves. Yes, a person may have offended but it’s up to us how we react to that. Incarceration didn’t use to be the automatic response.”

Loury adds, “This is about who we are and how we do business.”