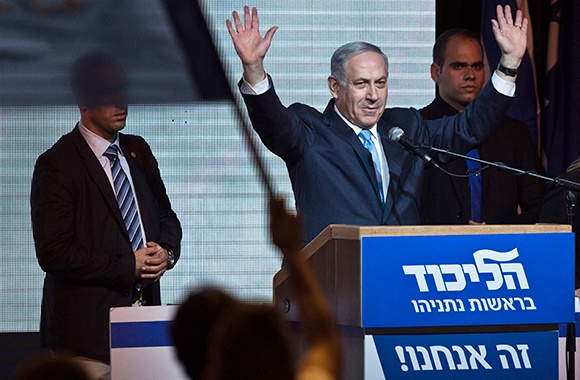 "...elections in Israel have become a device for moving Israel increasingly in the direction of ethnic nationalism, not liberal values."

Prime Minister Benjamin Netanyahu’s surprising victory in the Israeli elections reinforced some deeply depressing trends in Israel. The concrete outcome of the Israeli election---what the ruling coalition will be---may be unclear for several weeks.  What is clear is the declining quality of Israeli democracy.  Yes, there were contested elections, with at least 26 parties running.  But elections in Israel have become a device for moving Israel increasingly in the direction of right wing ethnic nationalism, not liberal values.

Israeli democracy is in steady decline.  We’re not talking about soft authoritarianism here, as in Putin’s Russia.  We’re talking about hard racism.  During the election campaign, Netanyahu used the kind of blatant anti-Arab racist language to scare his right-wing supporters into going to the polls that would be unthinkable in a Western country.  He publically expressed strong alarm at the high level of Arab voter turnout.  Israeli Arabs make up 20% of Israel’s population.

Imagine if a US presidential campaigner publically expressed alarm at the high level of black turnout.  “No other Western leader would dare utter such a racist remark,” Shelly Yacimovich, a member of the Labor Party, wrote on Twitter. “Imagine a warning that starts, ‘Our rule is in danger, black voters are streaming in quantity to the polling stations.’  ”  Indeed.  Imagine, even, that a leader stated “Our rule is in danger, Jewish voters are streaming to the polls.”

It’s hard to know what’s more depressing:  that Netanyahu thought that appealing to overt racism might work, or the fact that it did work.  Earlier, on March 8, the foreign minister, Avigdor Lieberman, who heads the ultranationalist Yisrael Beiteinu party, said that “disloyal Arabs should be beheaded.”  One could be excused for thinking of a Jewish ISIS.

This is what passes for acceptable discourse in Israel these days.  Elections there have become a vehicle, not for democracy, but for legitimating illiberal values and practices. Netanyahu’s statement just before the vote that he would never allow creation of a Palestinian state confirmed the suspicions of many observers that he had never been serious about a two-state solution.  It added to the picture of a state determined to head toward international isolation.

These deeply troubling trends suggest that the Obama administration will need a new course of action.  It should begin by making clear that it will no longer use its veto to protect Israel from resolutions in the UN Security Council.

Further, the outcome of the election is an open invitation to the growing Boycott, Divestment and Sanctions, or BDS, movement.  As Israel’s government becomes increasingly recalcitrant, even those who consider themselves friends of Israel will come to believe that the only strategy left for achieving a settlement of the conflict with the Palestinians is overt external pressure on the Israeli government.