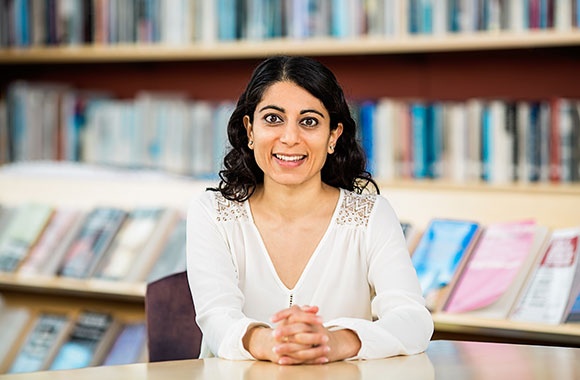 “One of the key dimensions of gender inequality in suspension we’re identifying is family structure. It’s the combination of being a boy from a family that doesn’t have two intact parents where we continue to see this disproportionality in school suspension at age nine.”

The Far-Reaching Effects of Unequal Gender and Racial Treatment

Why haven’t the strides that women have made in education carrying over to their working lives? Why are African American boys more apt to be kicked out of school? And why is diagnosing kids who have borderline levels of ADHD not necessarily beneficial for their social and academic success?

When she’s not teaching, these are some of the primary questions Jayanti Owens thinks about in her role as an assistant professor of sociology and public policy. Owens joined the faculty at Brown and Watson in September. She had just completed a postdoctoral fellowship at the University of Wisconsin-Madison through the Robert Wood Johnson Foundation Health & Society Scholars Program. Owens received her Ph.D. in sociology and demography from Princeton University in 2013.

In the United States, 60 percent of college degrees are now awarded to women. One of the research topics investigated through her dissertation, which is titled “Habits that Make, Habits that Break: Gender, Children’s Behavior Problems, and Educational Attainment across Two Decades,” was how women’s higher rates of college completion in the U.S. may be traced back to certain behavioral and social advantages they had as young girls.

“There has been a fair bit of work in demography, sociology, economics, and public policy about why this has come about,” Owens said, “but two issues we really don't have a good grasp on are, first, how early in the life course women’s educational fortunes originate, and, second, whether these gains that women have made in education pay off to the degree that we would expect them to in the labor market.”

This latter issue drives Owens’ current research: How the behaviors and social skills that help girls get ahead in school are perceived in a work context. These behaviors, she explained, include the ability to self-regulate, to delay self-gratification, and to pay attention for extended periods: social skills that involve getting along with others, controlling one’s temper, and interacting with both adults and peers in productive ways. For jobs that require these types of skills, she’s trying to determine whether women are seeing similar gains—such as through earnings and promotions—as men with the same skills, and whether this varies across occupations.

“One of the things I’m finding,” she said, “is that the behaviors that pay off and gain pretty big rewards in a school context don’t get rewarded as highly for women as for men in the labor market. And, in fact, in some contexts women are actually penalized for problems with these skills whereas men are rewarded for their behavioral problems.”

Ideally we want individuals and groups to be as fulfilled and productive as possible, she said, so the fact that women’s behavioral strengths aren’t rewarded to the extent we would expect them to be “should be of concern for society as a whole.” If women’s skills aren’t rewarded fully in terms of their labor market earnings, this also affects children and families, because household income is one of the largest predictors of how kids do in education and, later, in the work force themselves. Therefore, that women’s skills aren’t compensated at the level we would expect could have cumulative ramifications for intergenerational inequality down the line.

“What hasn’t been a focus of this conversation in the past,” Owens said, “is the fact that women’s salaries constitute an increasing share of family household resources overall. If women are not gaining the rewards that they should for the skills that they bring to the table, this also has inter-generational consequences because it reduces household income overall.”

Another important focus area for Owens is how gender and race intersect in the perpetuation of social inequality, both in the United States and in the developing world. One particular topic she’s currently researching and writing about is why there are higher rates of school suspension and expulsion for African American boys than for white boys and for boys compared to girls. “There hasn’t been a lot of research that shows whether these disproportionalities in things like suspension persist even controlling for behavior problems,” she said. In a collaboration with Sara McLanahan, a professor at Princeton University, Owens and McLanahan are using a large data set of about 5,000 nine-year-old students in 20 major urban areas in the U.S. and, controlling for differences in behavior, comparing suspension rates of African American boys and girls to those of white boys and girls.

“One of the key dimensions of gender inequality in suspension we’re identifying is family structure,” she said. “It’s the combination of being a boy from a family that doesn’t have two intact parents where we continue to see this disproportionality in school suspension at age nine.” There’s also a gender gap: When you compare boys and girls raised in unstable families, she said, boys are much more likely than girls to be suspended for a given level of behavior.

Effects of an ADHD Diagnosis

Over the past three decades, the rate of diagnosis of ADHD has risen. In some cases, said Owens, the kids who are diagnosed are in a gray zone, where it’s not clear if they have ADHD or not. In a third area of study, in collaboration with Heide Jackson, a postdoctoral researcher at Johns Hopkins, Owens is comparing kids from kindergarten to third grade who are similar in terms of behavior, early cognitive abilities, ethnic background, family income, and parents’ education.

“Everything we can observe about them is the same,” said Owens, “except that one has a diagnosis and one doesn’t.” These kids are looked at later in eighth grade. “What we find,” she said, “is that for the subset of kids who are on the clinical margins the benefits of diagnosis are not as clear cut. We are finding there’s actually a really large negative association between receiving the diagnosis and behavioral adjustment and academic achievement five to eight years later.”

Given such varied research interests, Owens is happy to be at Brown. “It’s really fun to become integrated into this interdisciplinary setting,” she said, “and to have a chance to speak to multiple types of audiences and to have colleagues who are researching such a wide range of topics. It has also been wonderful to be a part of teaching the master of public affairs students in the program launched by Watson and the Taubman Center this year.”